2 April 2015  ::  Latino toddlers whose language comprehension is roughly similar to white peers at 9 months old fall significantly behind by the time they are 2, according to a study released Thursday. 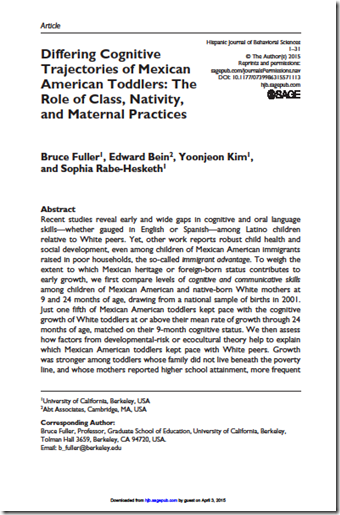 The UC Berkeley study found that four-fifths of the nation's Mexican American toddlers lagged three to five months behind whites in preliteracy skills, oral language and familiarity with print materials.

Although earlier studies have shown that Latino children are raised with emotional warmth and develop social skills on par with others when they enter kindergarten, the new research found they are not receiving sufficient language and literacy skills at home, said Bruce Fuller, a UC Berkeley professor of education and public policy and co-author of the study.

"For many Latinos, the home is a nurturing and supportive environment, but it's not necessarily infused with rich language and cognitive challenges," Fuller said. "Being warm and fuzzy may lead to well-behaved youngsters but it doesn't necessarily advance a young child's cognitive agility."

Mothers of toddlers who fell behind were more likely to be foreign-born, low-income and less educated. They were also less likely to read to their children daily or give them as much praise and encouragement as those whose children kept pace with white peers.

In addition, other research has found that parents with more education limit television, ask their children more questions, give them more opportunities to articulate their feelings and have them show off their skills -- counting to 10 for grandma, for instance.

Latino mothers also have been found to issue more commands -- set the table, turn off the TV -- which may stem from the need to maintain order in larger families, Fuller said. And Latino mothers tend to believe that children should wait for kindergarten to learn to read, compared with white mothers who see age 2 as the appropriate age for such learning, according to a UCLA study. Fuller said that difference may stem from the traditional Mexican respect for teachers.

Less than half of all Latino 4-year-olds attend preschool, compared with 70% of whites.

Among Mexican-Americans, greater growth was recorded among toddlers whose mothers worked outside the home than those who didn't, even controlling for parent education levels. Fuller said the reason is still "a bit mysterious" but may be connected to greater acculturation and exposure to different parenting practices among working mothers.

The study tracked a nationally representative sample of 4,550 children from birth to 30 months.

The findings underscore the need for widespread parent education and renewal of federal funding for such programs as home visits to train families on effective parenting practices, Fuller said. Most funding is focused on preschool but "we've got to start earlier because "the disparities open up far sooner," he said.

"The good news is that we know what works," he said. "The question is how do we get mom and dad to understand the need to nurture stronger language skills by age 1 and 2 and that parents play a large role in that development?"