BURBANK SCHOOL BOARD HIRES HILL ON 4-0 VOTE, BUT NOT BEFORE BOARD MEMBER KEMP SCOLDS TEACHERS, RESIGNS AND WALKS OUT OF MEETING 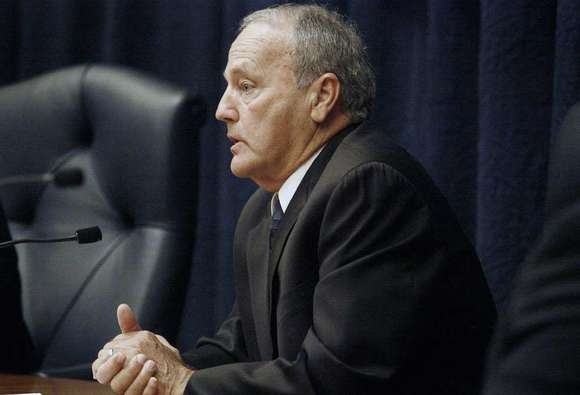 Before the Burbank Unified school board hired new superintendent Matt Hill Thursday - despite opposition from teachers - board member Dave Kemp, himself a former BUSD teacher, tendered his resignation, said he was "appalled" by the teachers' behavior and walked out of the meeting.

April 17, 2015 | 8:29 a.m.  ::  During a heated meeting packed with teachers who opposed the Burbank school board’s proposed choice for the district’s next superintendent, the board made the hire in a 4-0 vote Thursday, but not before longtime board member and retired teacher Dave Kemp submitted his immediate resignation and walked out of City Council chambers,  saying he was ashamed of the teachers’ behavior.

Many teachers, along with parents, who filled council chambers Thursday night, spoke against Hill’s hiring, in part, because he does not have any teaching experience or credentials. They also pointed to his role in a $130 million implementation of a student management system that failed at Los Angeles Unified, where he had two years remaining on his contract as LAUSD's chief strategy officer.

“I can hardly tell you how disappointed I am in the board tonight for putting us and the community in this position,” said Lori Adams, president of the Burbank Teachers’ Assn. during the public comment portion of the meeting.

She encouraged board members to continue their search for an “experienced” superintendent to guide the 15,000-student district, winning applause from fellow teachers.

A few days earlier, the teachers’ union asked the L.A. County district attorney's office to look into possible violations of the state's open meeting law, the Brown Act, regarding the potential hiring of Hill as the new superintendent.

District officials reported that Hill had been selected as a finalist for the position on March 15, but nothing was reported out of closed session from that day's meeting. Public officials are allowed to discuss certain matters behind closed doors — including personnel matters — but votes are required to be reported in the open afterward.

Under the Brown Act, actions taken in violation of the law are voided.

In response to the union’s allegations, school board member Larry Applebaum said the district has been “overly transparent,” and when two former superintendents, Greg Bowman and Stan Carrizosa, were hired, their contracts were not made public until the meeting where they were offered a job.

During the meeting on Thursday night, Burbank High teacher Diana Abasta said Hill’s contract, which includes a $241,000 base salary, was an “insult.”

“I have never been so disheartened,” she told the board. “And you make me feel that it’s not good enough to be a teacher because you can bring someone in without any experience.”

“This is one of those times I feel you guys are making a serious mistake,” high school teacher Jerry Mullady said.

Also in the audience was a Burbank police officer in uniform, which is not typical during Burbank school board meetings.

A few people pleaded with the board to hold off on voting until two newly elected board members — Steve Ferguson and Armond Aghakhanian, who are expected to take their oath of office in early May — have time to weigh in on the hiring process.

The current board, however, began deliberating over the next superintendent in November after Britz announced in October she would retire at the end of this school year, after 40 years in education and about a decade at Burbank Unified.

“Common Core’s all about evidence and argument,” said Burroughs High teacher, Jill Sullivan. “Make your case. What has Mr. Hill done that is so special to you?”

However, before they offered their insight, Kemp, a board member for 12 years and a teacher in the district for many more years, stepped down from the dais and walked up to the podium as the teachers had, speaking during the public comment session not as a board member, he said, but as a citizen.

“I am absolutely appalled and ashamed by [this] mob mentality,” Kemp said during his seven-minute address to the teachers.

“This is unsuitable. And I am so unhappy that so many of my former colleagues decided how I’m going to vote on this situation,” he said, adding that he’s been “raked over the coals” over Hill’s potential hire.

Even so, as he did during Tuesday’s three-hour public forum with Hill, Kemp spoke in support of Hill, 38, describing him as “a terrific young man.”

“I’m so ashamed of the people I always thought were such good friends and former colleagues that meant so much to me, that at this time, I can no longer be a part of this. I’m tendering my resignation to Dr. Britz,” he said.

He then picked up his belongings, handed Britz a yellow slip of paper and walked out of the chambers.

Shortly after, school board President Roberta Reynolds called for a brief break, and within 10 minutes, the meeting resumed — without Kemp — for additional public comments.

Then Ted Bunch, who has also served on the board for a dozen years, said he empathized with Kemp’s reaction.

“He feels betrayed by you,” he said. “I can understand why Dave said, ‘The hell with it and walked out.’ You have no confidence in us. You listen to what the union says and you eat it up like it’s steak.”

Fellow board members went on to offer their insight into choosing Hill as a finalist after a national search that brought the board a total of 18 candidates, which they whittled down to five to interview.

“If you think that I have not spent dozens and dozens and dozens of hours going through binders this thick of people’s qualifications, doing due diligence and doing vetting… I didn’t just leave it to a search firm to do it,” board member Applebaum said. “I want somebody who’s going to lead the entire district to greatness. I believe Mr. Hill could.”

Fellow school board member Charlene Tabet said she was looking for a leader “who wasn’t just what we’ve always had,” adding that Hill “made me feel I needed to be a better board member if he was going to be our superintendent.”

Out of the candidate pool, Reynolds said Hill stood out “with something different” than the others. “And honestly, I don’t think I’ve slept for four weeks because the decision is that important,” she said.

Board members noted that Hill would have a three-year contract and no cellphone or auto stipend, but they did not elaborate on their reasoning for setting Hill’s salary at $241,000.

After casting their vote approving his hire, the school board invited Hill to take the podium, at which point -- before he began speaking -- Adams and dozens of others, many of them teachers, abruptly left the chambers, leaving about 25 people who stayed.

“Tonight, even though it’s so difficult to have this experience, it means something that I knew when I started researching Burbank,” Hill said. "Every single person in this room tonight, and probably at home, has a deep conviction and passion for students. And this work is so challenging that we get emotional. It’s personal, and it should be because it’s every single one of our responsibilities to help those children.”

Hill recalled that when he first met Kemp, he said Kemp told him he wouldn't vote for him because teachers and others stated in early feedback that they wanted the next district chief to have been a teacher and a superintendent.

“But you know what he did? What we should do for every single human being? He said, ‘There’s something in you that I believe in. I’m going to hear you out. I’m going to listen. I’m going to give you a chance,’” Hill said.

“I didn’t know how he was going to vote today. He told me initially he wasn’t going to vote for me. Maybe he would have, maybe he wouldn’t. I don’t know,” Hill added. “The biggest disappointment I had today, and we’ll move on from it — we have to make sure that we do something different as a community, is we give every student and every adult an opportunity, and when they fail, we pick them up together. I am here to help, to lead, to serve, and I want to thank the board for seeing what’s in me and helping me realize the leader I can be.”

The board continued with its regular meeting, and adjourned about 12:15 a.m.