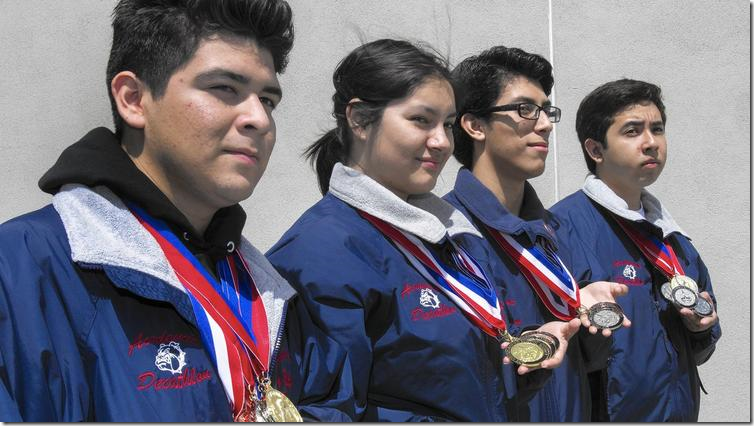 1 April 2015  ::  Four Garfield High students will participate this month in the final round of the national Academic Decathlon, the first ever to compete as individuals — rather than as a school team — from the Los Angeles Unified School District.

They are among 14 students in California invited to participate, after their school teams didn't win the state competition.

“I'm pretty nervous, I guess, because this is uncharted territory for Garfield in general and even more so for me. It's a little bit scary.”

The Academic Decathlon, a grueling academic challenge, is known as a team event. The contest for individuals, which has several rounds, was set up to provide opportunities for students who are home-schooled, who aren't on their school squad or whose school doesn't have a team. After the state finals, however, organizers also opened up slots for the highest-scoring individuals on a team that made it to the state round.

Garfield, which serves mostly low-income minority students from East L.A., finished seventh in the state competition, which was held in Sacramento in March. Only the state's top team, Granada Hills, moved on to the nationals, which will be held in Garden Grove from April 16 to 18. The second place team, El Camino Real in Woodland Hills, will compete in a national online competition for large high schools.

After the state matchup, the Garfield students thought they were done. But then came the invitation from the decathlon organization.

The students were excited, but their first concern was a fee of $250 required from each individual participant, said coach Kevin Murchie. L.A. Unified agreed to pick up the cost, and all four — Wendy Olvera, Alfonso Caballero, Joseph Nabor and Brian Rios — will take part.

Garfield became known nationally because of the late Jaime Escalante, who taught Advanced Placement calculus there from 1978 to 1991, a success story dramatized in the movie "Stand and Deliver." But the campus also has been long associated with poor overall academic results.

Still, its most recent graduation rate has improved to 88%, with 35% of graduates qualifying to apply to a University of California or Cal State campus, according to state data.

A typical decathlon team has nine members: three A students, three B students and three C students. Coaches are always on the lookout for underachieving students who can fill the latter categories, Murchie said. Garfield's qualifying students competed in the B and C categories.

"I'm pretty nervous, I guess, because this is uncharted territory for Garfield in general and even more so for me," said Joey Nabor, a 17-year-old junior. "It's a little bit scary."

Entering high school, Joey said he had never read an entire book, was known to show up late to class and received poor grades. He considered dropping out, as his two older brothers had done. He was placed in a low-level English course, but the teacher noticed his score on a reading test and ordered him to Murchie's honors class.

When he realized he'd have to put in a lot of effort, he called home at lunch the first day, asking his mother to get him out of the class. She told him to stick with it, he recalled.

Joey quickly warmed to Murchie's animated teaching style, but he refused to read Charles Dickens' "Great Expectations" — too long, too inaccessible, he decided. Joey wouldn't read Shakespeare either, the poetic language was "too pompous," he said he felt at the time.

But Murchie kept pushing and directed him to "The Sun Also Rises" by Ernest Hemingway.

Something about the unadorned, straight-ahead prose caught Joey, made him want to keep going. That was the beginning. He soon progressed to the comparatively obscure styles of William Faulkner and James Joyce.

"Now this kid can't stop reading," Murchie said. "He saw all this wealth of knowledge out there."

"I'm cursed because I have a passion for literature," Joey said. "My dream would be to be a full-time writer. I also wouldn't mind teaching, like being a professor."

Murchie successfully recruited Joey to the decathlon team as a 10th-grader; he committed to studying about 35 extra hours a week, even through the summer. And there's more work ahead.

"There's no downside to that," he said. "Studying is always good. I just hoard the knowledge."

This year's theme was new alternatives in energy. The competition has 10 parts, including interviews and speeches and tests in economics, literature and music. On Tuesday, the Garfield four completed the online portion, which is composed of an art exam and essay writing.