LAUSD BOARD OF ED CALLS SPECIAL CLOSED MTG TO APPROVE CONTRACT OFFERED TO TEACHERS TODAY @ 3PM; Committee of the Whole moved up to 1PM +Agenda

April 20, 2015 3:02 pm  ::  The Los Angeles Unified school board is meeting [Tuesday] afternoon in private to vote on approving the contract agreement negotiated with the 35,000-member teachers union, UTLA, that gives district teachers a 10.4 percent raise over two years.

What that translates to in dollars is a work in progress. Tom Waldman, the district spokesman, told LA School Report today that the district’s chief financial officer, Megan Reilly, is developing a breakdown of the costs in tiome for tomorrow’s meeting.

The closed session had not been on the scheduled but was quickly arranged to put the deal before the seven board members for a vote.

Reilly has spent the last several months warning the board to observe fiscal restraint. She has has told the members that any raise above the district’s earlier offer of 5 percent would put the district at risk of financial ruin.

In a presentation to the board on March 11, she reported that LA Unified is facing a budget deficit of $113 million for the 2015-16 academic year. The district also issued 609 possible lay-off notices for next year for a savings of nearly $51 million.

Further, the board sent an interim report to the Los Angeles County of Board of Education last month, saying that based on current projections LA Unified may not be able to meet its financial obligations. That report, which projected a deficit and recommended millions of dollars in cuts left blank a section which projected any additional costs for future labor agreements. (See here).

To further complicate matters, Superintendent Ray Cortines has not yet presented his draft budget — typically offered in early April, nor has Gov. Jerry Brown presented his revised budget, usually made public in May, that could bring the district $2 million more dollars than it is expecting. In short, board members may be asked to approve the contract with the teachers without knowing exactly how the district will pay for it.

The deal completed late Friday night still needs to be ratified by teachers, and it remains unclear when that will happen. A statement on the UTLA website says only, “Voting on the TA will take place at school sites soon.”

If agreement by union members follows an approving board vote tomorrow, the deal goes back to the board for final approval.

In addition to a 10 percent salary increase over two years, the district agreed to spend an additional $26 million to hire more teachers and counselors. But that budget falls way short of funding UTLA’s earlier demands of hiring 5,000 additional school employees including teachers, nurses, librarians, and counselors.

The new deal leaves out other long-standing UTLA demands that were fundamental to the “Schools LA Students Deserve” campaign, including:

LA Unified leaves itself open to additional cost increases from other unions with which it has recently negotiated new contract deals.

At least two other of the district’s labor partners have so-called “me too” contacts, which means their members are entitled to get the same increases the teachers get. They include the Associated Administrators of Los Angeles, a union with two bargaining units — one for the district’s 2,500 principals and assistant principals and the other for a group of 250 employees who serve in such positions as transportation directors and food service managers.

“The amount of compensation and the timelines are different from ours, and it will take some time for the district to propose a ‘me too’ for us,” said Dan Isaacs, administrator for AALA. “But our ‘me too’ clause with the district is solid. We’ll do an analysis to see what’s in the best interest of our members, and I’m sure the district will be fair with us.”

A group affiliated with the teamsters — cafeteria managers, office managers and plant managers — also have the “me too” deal.

The district’s service employees union, SEIU Local 99, which represents about 35,000 workers, opted out of its “me too” clause earlier this year when members approved a contract raising the minimum wage to $15 an hour for its lowest paid employees by 2015.

Among the non-monetary compromises reached between the district and the teachers with the help of a mediator is a new teacher evaluation system that would rate teachers on a three-tier system. It replaces a two-tier system, which prevented the district from being in compliance with the CORE Waiver, a federal funding program that could add $171 million over three years to district coffers.

Board member Steve Zimmer said he fully anticipates that board members will vote to approve the contract, which brings the teachers their first contract in eight years.

“We are going to hear from the superintendent and I anticipate he will have the full support of the board moving forward,” Zimmer told LA School Report.

Zimmer added that “the salary agreement is the definition of compromise.”

“It is the maximum we could do at this moment to show the most respect that we could possibly show in monetary terms for our teachers,” he said.

“There’s nothing more valuable than our youth – and the people that are at our schools helping them day in and day out, are worth every penny,” he wrote in a statement. “I encourage my colleagues to vote yes with me on this much deserved agreement.” 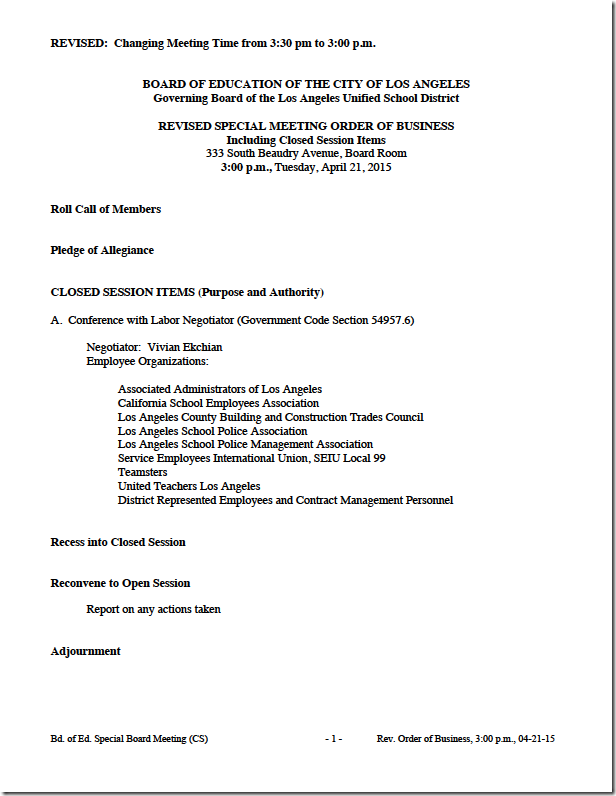