SEC launches informal inquiry into LAUSD's use of bonds for iPads 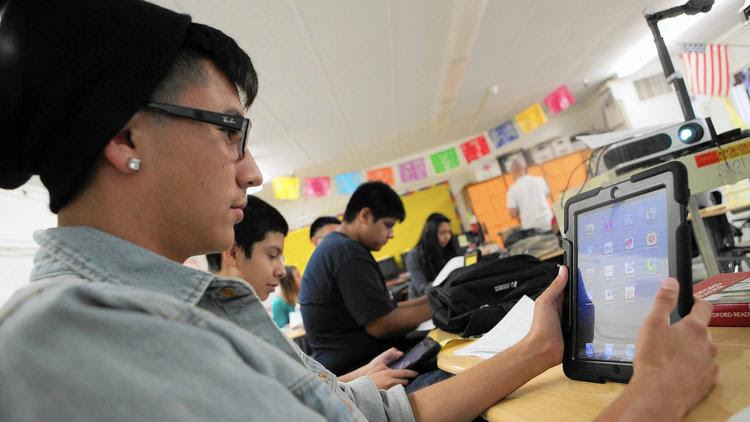 17 April 2015 | 3AM  ::  The federal SEC has opened an informal inquiry into LAUSD's use of bonds for its iPad project

The federal Securities and Exchange Commission recently opened an informal inquiry into whether Los Angeles school officials complied with legal guidelines in the use of bond funds for the now-abandoned $1.3-billion iPads-for-all project.

In particular, the agency was concerned with whether the L.A. Unified School District properly disclosed to investors and others how the bonds would be used, according to documents provided to The Times.

District officials said they were optimistic that they had addressed the SEC concerns.

The news of the SEC inquiry came the same week that L.A. Unified officials demanded a refund from computer giant Apple over curriculum supplied on the devices by Pearson, which sells education services and materials worldwide. Pearson was a subcontractor to Apple under a contract approved by the Board of Education in June 2013.

That fall, problems immediately plagued the rollout of devices to campuses, and questions soon arose about whether Apple or Pearson had an unfair advantage in the bidding process. An ongoing criminal investigation by the FBI is looking into that matter. Current and former district officials have denied any wrongdoing.

Apple has not responded to requests for comment. Pearson has consistently defended its actions, including on Thursday, when top executive Michael Barber said that L.A. students would benefit if the district stayed the course with the company's product.

The SEC declined to comment and does not, by policy, confirm or deny investigations. L.A. Unified acknowledged meeting with an agency attorney.

The federal agency is charged with protecting investors and maintaining fair, orderly and efficient markets. Its enforcement division frequently looks into "misrepresentation or omission of important information about securities," according to the commission.

With the help of an outside law firm, L.A. Unified prepared a presentation, dated March 31, that outlined measures it took to inform the public and potential investors about how the taxpayer-approved bond funds would be spent.

"LAUSD was transparent regarding the program and its funding," and all necessary disclosures were made to the public, underwriters, rating agencies and investors, the district told the SEC representative.

The district also distinguished between the L.A. Unified bonds and different types of bond debt that are issued under other disclosure rules.

The L.A. Unified general obligation bonds are paid back over time through property taxes. Projects funded by the bonds have no role in generating revenue to investors, the district said.

"The particular use of the bond proceeds is not material," the district wrote.

L.A. Unified clearly designated funds for technology, but did not mention tablets. At the time of the district's most recent bond issue, in November 2008, iPads were still two years away from entering the marketplace.

But officials have maintained that tablets are a modern equivalent of the traditional computer lab and therefore a legal and appropriate use of bond funds.

A separate question has been whether the district acted properly in using bond funds to purchase curriculum on the devices. But that issue was not part of the district's presentation.

School board member Bennett Kayser said Thursday that legal questions regarding use of the bonds were not sufficiently examined before the project moved forward.

"I wish the SEC had looked into this over a year ago," Kayser said.

(Kayser did not participate in the original discussion or vote on the contract because he owned a small amount of Apple stock. He sold his holdings and emerged as a project critic, although he later voted to purchase additional devices for schools and for testing.)

The district's demand for a refund came in the form of a letter sent Monday to Apple.

Pearson offered only a partial curriculum during the first year of the license, which was permitted under the agreement.

The product has not caught on in L.A. Unified. Only two schools of 69 with the devices use Pearson regularly, according to an internal March report from project director Bernadette Lucas.

The report cited a litany of complaints, including content that could not be fully adapted for students with limited English skills, a large group in L.A. Unified. The district also claims the curriculum lacks important features such as online tests and data on how and when students are using it. Another problem has been getting access to the online curriculum quickly and consistently.

Barber, Pearson's chief education advisor, acknowledged that there have been difficulties and said that Pearson, Apple and the district shared responsibility as partners in the effort. But he added that Pearson was willing to work through such issues.

With such sweeping change, "you're going to have glitches. You're going to run into challenges," he said. In the long run, he predicted, Pearson's product could help "transform teaching and learning."

"Once you get used to using these materials," he said, students and teachers would find them "very engaging, very empowering."

The iPad project was pushed by then-Supt. John Deasy, who resigned under pressure in October, largely due to fallout from the iPad effort and a faulty new student records system.

SEC questions LAUSD on use of bonds for iPad project

Posted: 04/16/15, 5:39 PM PDT | Updated: 7 AM 4/17/2015  ::  LOS ANGELES >> The Securities and Exchange Commission recently questioned Los Angeles Unified School District officials as part of informal inquiry into whether they properly used bond funds for a beleaguered $1.3 billion project to provide an iPad for every student.

Lawyers for the nation’s second-largest school district and an outside firm met at the SEC’s Los Angeles office in late March to answer questions about the use of bonds for the iPad project and whether officials had publicly disclosed how the funds would be used.

“They asked us to come in and present to them on the bonds themselves,” Thomas Zaccaro, a partner with the firm that presented information along with the district, said in an interview with The Associated Press on Thursday. “All in all, we don’t see any issue with the disclosures.”

Both SEC and LA Unified officials declined to comment. The SEC does not routinely confirm or deny the existence of an investigation.

Former LA Unified Superintendent John Deasy launched the initiative to provide an iPad for all of the district’s 650,000 students, but it faced trouble from the start. Students found ways to bypass security installations and freely surf the internet. Teachers said they hadn’t been properly trained to use the technology. Questions were raised after emails were disclosed showing Deasy had been in communication with vendors Apple and Pearson before the contracts were put to bid.

Deasy resigned under pressure in October. In December, FBI agents seized about 20 boxes of records form LA Unified as part of a federal grand jury probe.

On Monday, LA Unified general counsel David Holmquist sent a letter to Apple demanding it stop any further delivery of Pearson software and vowed to seek reimbursement for math and reading materials students have been unable to use. The vast majority of students still can’t access Pearson material on their iPads, Holmquist said.

At the SEC meeting on March 31, Zaccaro said he and district officials showed that LA Unified had publicly disclosed bond use for computer hardware and software through investor presentations, presentations to rating agencies and to the public in board and county meetings. He also said because general-obligation bonds are repaid through county tax revenues, there is no connection between how proceeds are used and how they are repaid.

“There was a lot of public disclosure about the use of proceeds,” Zaccaro said.

Zaccaro said attorneys have not heard back from the SEC since.

US SEC investigating LA bond sale around troublesome iPad deal; Contract between LAUSD and Apple not being examined, only financials

updated 08:49 am EDT, Fri April 17, 2015  ::  Adding a further level of complexity to the Los Angeles Unified School District (LAUSD) failed iPad program, the US Securities and Exchange Commission (SEC) has opened an "informal inquiry" to investigate if the school complied with legal requirements for bond usage in the purchase. The agency is reportedly examining if the contract was properly disclosed to investors, and if sufficient documentation was provided to insure the bonds were used legally.

The LAUSD believes that they have accommodated the SEC's investigation. The SEC has not commented on the investigation, but the LAUSD has confirmed meeting with an attorney from the agency, as reported by the LA Times.
The most recent bond agreement was established in 2008, well before the iPad existed. In the ballot for the bond agreement, the LAUSD spelled out funds for technology -- which the LAUSD considers that applies to iPads as well. The SEC is not investigating the contract with Apple and Pearson, but rather just the sale of the bonds to facilitate the troubled purchase.
The news comes the same week that the LAUSD made public that it was seeking a significant refund from Apple on the devices and educational materials, saying that "will not accept or compensate Apple for new deliveries of curriculum." The LAUSD appears to have not paid enough out yet to Apple to cover even the iPad hardware, let alone the problematic educational materials, but this has not been positively confirmed.
Apple is the primary contractor for its deal with the school district, with Pearson being the sub-contractor. Any refund, or legal obligation to the LAUSD would have to come from Apple, with Apple choosing whether or not to pursue Pearson for recompense.