Cleaners at U.S. Department of Education headquarters report being paid $9.50 an hour without benefits, in violation of the SCA janitorial wage rate of $11.83 per hour plus $4.02 per hour in benefits. “We also have to use public aid and charity to feed and clothe our children.”    The US Secretary of Ed makes $199,700 per year …plus benefits. 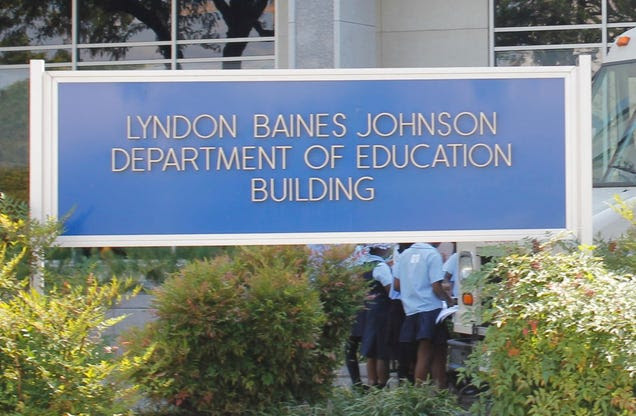 4/09/15 10:18am  ::  This morning, a group of low-wage contract workers who do jobs for the federal government are filing a complaint claiming wage theft. Even the janitor who cleans the Secretary of Education's office says she's not being paid what she deserves. [UPDATED below.]

The contract workers, who are being assisted by organized labor, include janitors, bus drivers, and grounds keepers on federal property in Washington, DC. Their complaint alleges more than $1.6 million in wage theft—they say that they are not being paid the wages that they should be as determined by the Service Contract Act, which mandates certain wage standards among employees contracted to work for the federal government. Though the act is supposed to ensure semi-decent minimum wages for all contract workers, it is riddled with rules and exceptions. (I'm not qualified to truly analyze the legal validity of the specific complaints of these workers—labor lawyers, please weigh in in the comment section below.)

Along with the wage theft complaint, the group assisting the workers has released a report on the issue that says that "federal contract wages are falling" as organized labor loses its grasp on these workers, and as contractors themselves become more adept at wriggling out of wage regulations. The specific allegations in the complaint, via the group's press release:

If the arcana of federal wage law makes your eyes glaze, here's something a bit more human: Sonia Chavez, who works as a janitor for a contracting company that deals with the US Department of Education, says that she is being ripped off for her due wages, even as she cleans the office of US Education Secretary Arne Duncan each night. Chavez gave us the following statement, translated from Spanish by Paco Fabian:

My husband and I are contract janitors who clean the office of the U.S. Secretary of Education. We only earn $9.50 an hour each – we should be getting closer to $15.

My husband, who is also a contract janitor at the Department of Education, studied medicine in college for 5 years back home. If we earned more, he could go back to school as well.

But right now, we’re surviving day by day. We regularly get eviction notices because we can’t afford to pay rent on time.

We also have to use public aid and charity to feed and clothe our children. They deserve better.

The full report on this issue is here.

UPDATE: We received the following statement from Dorie Nolt, press secretary at the US Department of Education:

“The well-being of every person who works in our buildings, whether or not they are employed directly by the U.S. Department of Education, is important to us. The General Services Administration manages the Department’s headquarters facilities, including the janitorial/custodial contract. GSA is working with the vendor to ensure that employee concerns are appropriately addressed in a timely manner.”