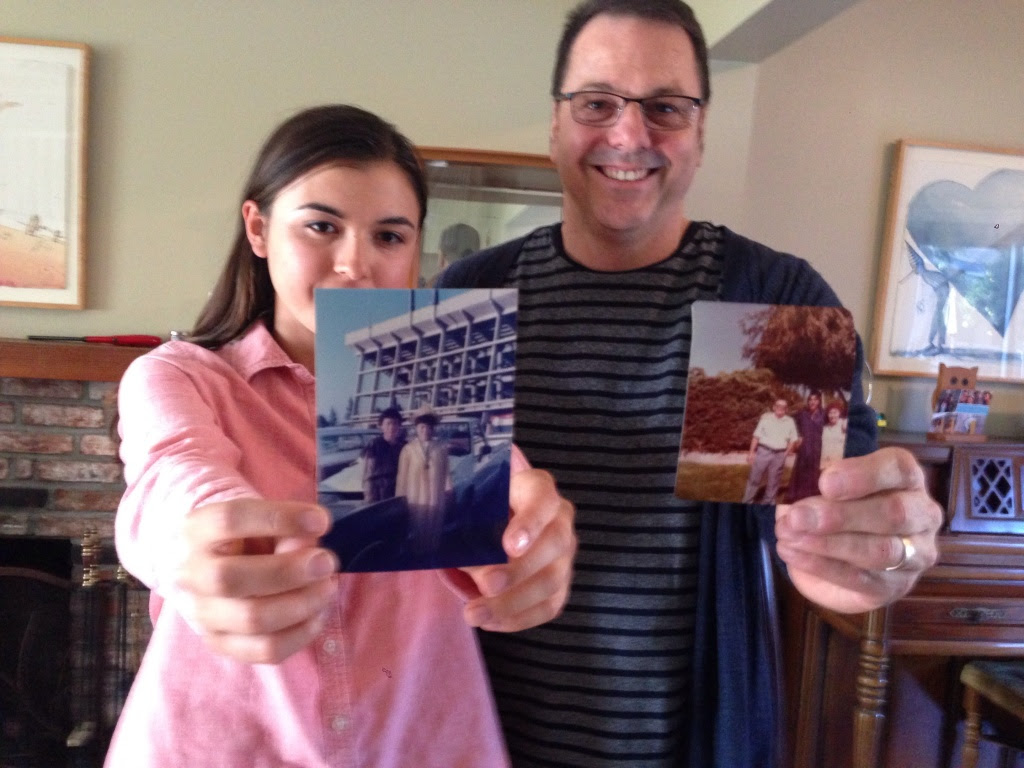 Julia Jaynes, a 12th-grader, holds up a picture of her mother graduating from Long Beach Poly High School, the same school she'll graduate from this spring. Her father, Bill, holds up his own graduation photo. Adolfo Guzman-Lopez/KPCC

April 8, 2015  ::  Hundreds of thousands of California seniors are getting ready for their much-anticipated public high school graduation ceremony, though many don’t know it's against the law for their schools to require them to buy a cap and gown without offering a set to use for free.

The practice violates the free public schools guarantee in the state constitution.

“The reason why this is important is to not create a two-tier system of education where those with resources and money are able to buy a better — and have a different — educational experience,” said ACLU lawyer David Sapp.

He says many schools are complying with the law: Los Angeles Unified School District sends its students a letter that uses the state’s wording on caps and gowns. In Norwalk-La Mirada, the school district allows all graduation seniors to use loaner sets.

However, in interviews with 12th-graders and their parents and a review of the documents that schools provide, it's clear that some districts leave many students in the dark about their options.

‘The activities director said you have to wear a cap and gown for graduation ceremony because it’s a very special event in your life and why wouldn’t you want to be wearing a cap and gown,” said Long Beach Poly High School senior Julia Jaynes.

Materials in her school’s graduation packet didn’t say whether caps and gowns are required for the graduation ceremony or whether the district will provide one to students for free.

Her parents are professionals, and can afford her senior year expenses. The yellow cap and gown they purchase will be a keepsake for her.

“My mom graduated from Poly 30 years ago and then I’m going to be walking at veterans stadium across the stage, too, and graduating. So it’s really cool,” Julia said.

Her father said the list of senior expenses is long and he wonders how families struggling to get by can afford the many graduation-related costs.

That’s the kind of financial pressure Hilda Rodriguez Guzman (no relation to this reporter) is feeling as her 12th-grader graduates from Wallis Annenberg High School, a charter campus in South LA.

“I feel horrible as a parent if I can’t give her a good experience and to celebrate all her accomplishments in the midst of everything that she’s been going through with her health,” she said.

Her daughter is graduating despite debilitating arthritis that keeps her on medication and at home some days.

Rodriguez Guzman recently learned that the state of California prohibits schools from charging a mandatory cap and gown fee.

Annenberg High, a charter within the Los Angeles Unified District, did not respond to a request for comment on whether its communication to students violated state law.

Long Beach Unified's high school packets also don’t explain the cap and gown options to seniors. But after KPCC asked officials for comment, they said they would send all 12th-graders a clarification that reads, in part:

“If you paid for a cap and gown but no longer wish to use one and would prefer to be reimbursed, please contact your school. Our high schools also make free caps and gowns available for students who wish to borrow them. Please also keep in mind that graduation dress codes will apply in the absence of a cap and gown.”

A letter sent to Pasadena High School seniors also fails to explain the cap and gown options to seniors as recommended by the California Department of Education. Half a dozen students at Pasadena's Muir High School said school officials told them caps and gowns were required and students would have to pay for them.

“First of all, we want to thank you for finding that out,” said Pasadena Unified spokesman Adam Wolfson.

He said students district-wide will likely be sent a letter clarifying that they can get a reimbursement from Jostens, the cap and gown company.

“We’re setting up a system with Jostens so if someone purchased a gown for graduation and chooses not to keep it, they can return the gown and be refunded their money,” Wolfson said.

Muir High senior Corey Taylor feels that's a good step on the part of the district.

“We shouldn’t have to pay to graduate. We have to pay to do all these things for education and all that. We’ve been here for four years; we’re just trying to learn," he said.

The ACLU hears from a small but steady number of parents complaining about illegal cap and gown fees. To that end, Southland State Sen. Ricardo Lara has introduced a bill that would direct the California Board of Education to ensure schools follow the law.

…because California Schools need a law to tell them to follow the law?