March 31, 2015 4:11 pm  ::  LA Unified met today’s deadline and filed an application for a No Child Left Behind waiver without one of the key requirements of the U.S. Department of Education — an agreement with the teachers union on a three-level teacher evaluation system.

If approved, the California Office to Reform Education (CORE) Waiver would clear the way for LA Unified to receive $171 million in federal funding.

While the absence of agreement with the union, UTLA, does not automatically disqualify the district or make it ineligible for federal dollars, Rick Miller, Executive Director of CORE, suggested today that the district’s incomplete proposal could jeopardize the district’s application.

“Non-compliance with this commitment, or any other commitment made in the School Quality Improvement plan, puts approval of the Waiver at risk,” he said in a statement.

In fact, Washington will not make final decisions on waivers for several more months, leaving open the possibility that LA Unified and UTLA could reach agreement within that time frame.

The union recognized as much today, issuing a statement late this afternoon saying, “UTLA is in continuing negotiations with the District and we see the CORE Waiver as one of many issues to be addressed in bargaining.”

Teacher evaluations have been part of the current contract negotiations between the district and the union, which are now in the hands of a federal mediator who is not scheduled to meet with the sides again until April 6 and April 15.

UTLA argues that a three-level evaluation system, one that would distinguish a “highly effective” teacher from those who merely meet standards or are below standard, paves the way for merit pay. The union is fighting to keep a two-level system in place.

LA Unified Superintendent Ramon Cortines addressed the issue in a letter to U.S. Department of Education Secretary Arne Duncan earlier this month, writing that the “only obstacle to full compliance…is the long-standing contractual agreement with UTLA that provides only two levels of overall final performance evaluation.”

Cortines offered to fly to Washington D.C. with the president of the teachers union, Alex Caputo-Pearl, to discuss the matter with Duncan in person. It is unclear if Duncan responded to Cortines’ request.

But LA Unified is not unique in failing to meet the administration’s waiver requirements. Georgia’s State Superintendent is asking the feds for an extension to review the application while the state decides on the length of its renewal request. Idaho is also seeking an extension.

And it’s possible Louisiana will ask for a delay as the state’s legislative session conflicts with the waiver renewal timeline.

Closer to home, Santa Ana Unified skirted around the teacher evaluation issue by implementing a three-level system at a single pilot school, according to Deidra Powell, chief communications officer for the southern California district.

“We’re on board for trying it but it’s much easier to see if it works in one school than applying it all over the district,” she told LA School Report.

“This lets us comply with everything and get our application in on time,” she said.

1 April ::  Six districts in California have applied for a three-year extension of their No Child Left Behind waiver, which is on high-risk status. The Education Department told the California CORE districts last fall [http://politico.pro/1vZsYwf ] that their waiver was at risk because they had to finalize plans for a new school quality improvement system and guidance for new teacher evaluation systems. Eight districts originally received the waiver in 2013, but two have since dropped out. The California CORE districts are now trying to address the feds' concerns, finalizing accountability system metrics and updating educator effectiveness guidelines. But the application is missing an important component, LA School Report writes [above ] - an agreement with United Teachers Los Angeles on a three-level teacher evaluation system.

- Nebraska, which doesn't have a waiver from NCLB, also applied for one. But the state's application probably won't meet the Education Department's standards because its teacher evaluation framework is voluntary for districts. More in the Omaha World-Herald: http://bit.ly/1BKPps1

April 1  ::  Most states looking to renew their No Child Left Behind waivers must file applications with the Education Department by today. Most states want a three-year renewal and that the department will be a better partner. Education Secretary Arne Duncan has heard them, saying [ http://politico.pro/1F9Pfiu ] the agency wants to focus on supporting states while they get deeper into implementation. But it remains to be seen how the agency will deal with states looking for wiggle room. For example, the feds allowed states a one-year delay to incorporate student test scores into teacher evaluations. But Connecticut wants [ http://1.usa.gov/1Nzj3ZG] to extend that for another year, into 2016-17. Federal law requires a 95 percent participation threshold in testing, but Colorado wants [ http://bit.ly/1Dl9LPI ] to ensure that schools aren't penalized no matter how many parents opt children out of testing.
One exception to the three-year renewal trend is Utah, where the state board of education voted [ http://politico.pro/1GH77TX] earlier this month to apply for a one-year renewal - and scrap the application altogether if the state legislature can provide more money. A few states are likely to ask for more time to apply. Georgia wants an extension because the state is still figuring out the length of its renewal request and new state Superintendent Richard Woods wants time to review the application, a state education official said. Idaho is also seeking [ http://bit.ly/1IgOzYX] an extension. Louisiana could ask for a delay, too. The state's legislative session conflicts with the waiver renewal timeline, complicating the application.
Four states going through an expedited waiver renewal process expect to hear from the Education Department. Kentucky, New Mexico, North Carolina and Virginia, are each eligible for a renewal of up to four years. They were able to fast-track their renewal requests because they implemented their waiver provisions on time, including more rigorous teacher evaluations.
The feds pulled Washington state's waiver last year after lawmakers failed to pass a bill requiring the use of student test scores in teacher evaluations. A new legislative fix has passed the state Senate and a House panel is considering it. Hundreds of teachers lined up to testify against the bill on Monday, The Olympian reports:
http://bit.ly/1CEWWgW . The House panel hasn't scheduled a vote, though Wednesday is the deadline to pass bills out of policy committees. The bill could still go directly to the House floor later this session. Still, it'll likely face a tough road in the Democrat-controlled chamber.
Politico Morning Education 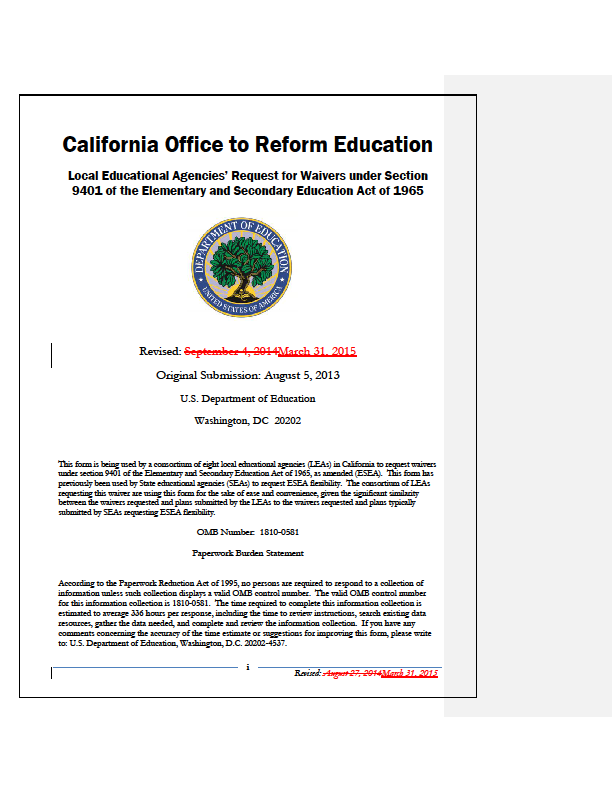