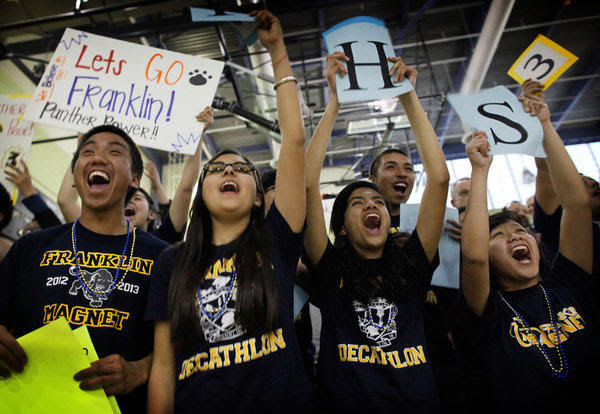 May 7, 2013, 6:30 p.m.  ::  Academic Decathlon teams from Los Angeles have won the state competition and, in a first, taken both first and second place at the national competition. Now, the season ends with one more distinction for L.A. Unified: Franklin High School has won a national online competition.

District officials said Tuesday that Franklin scored 38,184 points out of a possible 48,000 in the virtual battle of wits, in which students were tested in such subjects as math, science and literature. It's the third year that L.A. Unified schools have swept the state, national and online competitions, the district said.

"Franklin's tremendous victory in the online competition is the culmination of another great performance by LAUSD schools in the Academic Decathlon," L.A. schools Supt. John Deasy said in a statement.

Cliff Ker, the district's coordinator for the decathlon, added: "In a competition where expectations are always very high, this group has excelled."

Granada Hills Charter High School -- for the third year -- has taken the state and national titles. After a rule change allowed more than one team from each state to proceed to the national competition, El Camino Real Charter High School -- a longtime decathlon powerhouse, having won nationals six times in the past -- also took part, placing second at the competition last month in Minneapolis.

Franklin represented California in the online competition in the category of large schools, based on enrollment. Nine schools from across the country competed.

Unlike the typical competition -- which includes 10 subjects, including subjective portions such as giving speeches and being interviewed by judges, as well as the Super Quiz relay -- the online showdown is based on six objective tests in economics, language and literature, math, music, science and social studies.