‘MIRACLE’ L.A. SCHOOL BOARD TRIUMPH: She thought of her students 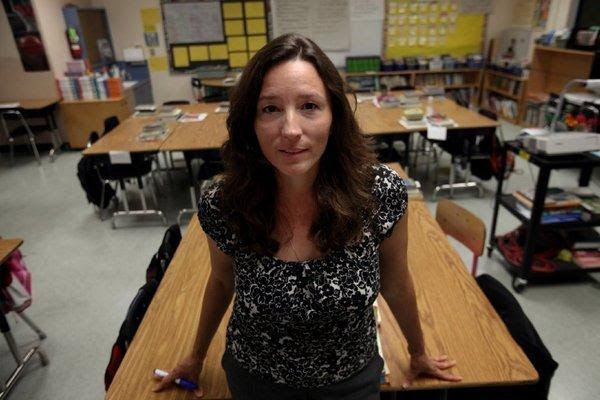 May 27, 2013, 4:54 p.m.  ::  For a fleeting moment in her underdog campaign, Monica Ratliff faltered. The candidate for the Los Angeles school board stood outside her chief fundraiser's home and balked at the task of asking people for money.

Then, she said, she thought of three struggling students in her fifth-grade class at San Pedro Street Elementary, located in a gritty downtown Los Angeles neighborhood. She thought of the vocational programs, better training for teachers and other ideas she could push for as a board member to keep her students from falling off track.

"I am asking for them," she said after her electoral triumph last week. "After that, I was inspired."

From start to finish in what supporters are calling her "miracle" win, Ratliff has been driven by thoughts of her students. The 43-year-old teacher defeated Antonio Sanchez, a political aide backed by a $2.2-million campaign (compared with Ratliff's $52,000) and supported by Mayor Antonio Villaraigosa, his allies, heavyweight labor unions and others.

But, her supporters say, Ratliff had what Sanchez lacked: The authenticity of a 12-year teaching career and a deep emotional commitment to her students that visibly surfaces when she talks about those who need her help.

Ratliff entered the race motivated by thoughts of those students — some of whom had stumbled after leaving her school but might have stayed on track with more sustained support. She learned of the District 6 open seat just three days before the filing deadline but jumped in anyway.

"This is my chance to help these kids," she recalled thinking. "I could change their educational lives."

During the campaign, she refused to take off any time from teaching, despite urging to do so from some of her campaign advisors. She went to bed at 11 p.m. on election night not knowing whether she won or lost, because she had to wake up at 6 a.m. to make the commute from Sunland to school.

And as she prepares to join the Board of Education, Ratliff brims with ideas about how she hopes to make the nation's second-largest school district more effective for students. How far she will get in promoting her ideas, however, is uncertain. The seven-member board is divided on many issues, although not always along the same lines.

One big theme Ratliff voices is more local control for schools to choose their own curriculum and spending priorities rather than follow top-down mandates.

Her classroom experience gives her strong views on what works and doesn't. District assessment tests are a "waste of money and time" because the results come in too late to help teachers, who constantly assess their students anyway, she said. Why not free up money and let schools make their own purchasing decisions — as San Pedro has done with federal dollars to fund a nurse, library aide, teaching assistants?

"You're not getting enough bang for the buck," she said of those tests, noting that charter schools are not required to give them.

Ratliff prefers to teach reading and writing with children's literary classics rather than the district-issued textbook anthology. So far this year, her class has dug into such favorites as "Charlie and the Chocolate Factory," "Old Yeller," "The Lion, The Witch and The Wardrobe" and, currently, "Holes" — books she says engages them far more than the shortened stories in district anthologies. How about encouraging all schools to make their own curriculum choices?

Even questions of class size and campus security should be left to the local school, she said. Smaller classes could help struggling students, but others might do fine in larger ones.

Does the district really need to spend $4.2 million for extra security aides at campuses in the aftermath of the school shooting in Newtown, Conn.? If schools were allowed to decide how best to spend those safety dollars, she said, her own campus might have decided to fund a gated buzzer system after a school staff member was threatened by someone who walked in off the street.

"I've felt some of the district mandates are disconnected from the classroom," she said.

Another major interest, she said, will be working with the district and United Teachers Los Angeles to find incentives for highly effective teachers to work in low-performing schools.

At her own school, for instance, the staff has boosted students who are overwhelmingly low-income and not fluent in English to outperform their district peers in reading and math. Nearly two-thirds are at grade level in math and more than half are proficient in reading.

And she is keen to push for more vocational programs. One of her students, she said, could be more talented on a more technical path but may not make it if pushed along a rigorous academic track.

The main goal of her opponent's biggest funders was to safeguard the job of L.A. schools Supt. John Deasy and strengthen his influence. During the campaign, Ratliff's position on Deasy "evolved," as she put it. Most recently, she said she wants to keep him on the job, but reserves her right to evaluate him.

As her school's union representative, she had to defend the rights of teachers, yet she still enjoyed a strong rapport with her principal. She served in the union's main decision-making body — its House of Representatives — yet the union did nothing of substance to elect her. As a result, she may have that rare opportunity to demonstrate true independence.

Her nuanced position on teacher evaluations aligns with neither Deasy nor the union. Although she's spent her career in a traditional school, she has no innate hostility toward independently managed charter schools, most of which are non-union.

"She's not the kind of person ever to hold a grudge or base her decisions on who scratched her back and who is her friend," said Ruby Chavez, a San Pedro colleague. "If you know Monica, you'll understand she has a mind of her own."

For now, Ratliff is savoring her victory. At a celebration party in Granada Hills over the weekend, more than 100 supporters ate barbecue and marveled at what many called her "David and Goliath" win.

Fred Huebscher, her campaign consultant, said two decisions proved critically important: Her ballot designation as "fifth-grade teacher," which conjured up warm memories of elementary school and images of her "teaching cute kids." And her decision to place an accent mark over the "o" in her first name to signal her Latina heritage (she refused suggestions to use her mother's maiden name of Asenio Padilla because she did not want to dishonor her father).

Other teachers who walked precincts with her said some voters told them they were repelled by Villaraigosa's and Sanchez's reliance on millions of dollars of outside funding. Chuck Kanganis, her boyfriend and campaign manager, said voters could connect with Ratliff's intelligence, compassion and "absolute integrity."

As she put it Saturday: "My grass-roots campaign was so grass-roots, it's seeds. But thanks to you it grew and grew."