Updated:   04/30/2013 09:27:44 PM PDT  ::  Barely two weeks after delivering a stinging no-confidence vote on the leadership of Superintendent John Deasy, the teachers union announced it will do a first-ever "performance evaluation" of the Los Angeles Unified chief.

United Teachers Los Angeles is asking its 32,000-plus members to "Stull Deasy," a reference to the state's Stull Act, which sets the guidelines for teacher evaluations. The survey, posted Tuesday at utla.net, asks teachers to rate Deasy on a scale of 1 to 5 on a slate of 25 questions, including instructional leadership, decision-making, student discipline and staff morale. The format is based on the principals' survey that UTLA members participate in every year.

"We understand that the superintendent reports to the school board, and we want to provide them with information it's important for them to have," UTLA President Warren Fletcher said. "The purpose of any evaluation is about improving performance, and it's important to have meaningful data to give to the school board regarding policy decisions about what is currently happening."

The union has been chafing under many of the reforms imposed by Deasy, such as the use of student test data in performance evaluations and his strong support for charters and other "choice" models in dealing with low-performing schools.

Deasy said he's evaluated annually by the school board based on a "performance meter" that measures success in such areas as graduation and attendance rates, student achievement and school safety. The board also talks with Deasy about performance issues during their monthly executive sessions.

"I report to the school board," he said. "Anyone else is certainly entitled to their opinion."

On April 12, UTLA announced that some 16,000 of its members had cast a no-confidence vote in Deasy's leadership and that it would present the results to the school board at its May 14 meeting. The union plans to rally "en masse" that day as Fletcher presents demands for salary hikes, smaller classes and the rehiring of laid-off workers.

The deadline for teachers to complete the survey is May 10, and it will take about two weeks to compile the results, Fletcher said. That means the evaluation won't be presented to the board until June.

In asking members last month whether they believe the district is headed in the right direction, UTLA mounted a "Whoopsie Deasy" campaign, using unflattering images of the superintendent in cartoons that spotlighted union concerns about salaries and layoffs, the loss of campus counselors and the treatment of teachers accused of misconduct.

Deasy himself characterized the no-confidence poll as "nonsense."

The performance evaluation had originally been scheduled for March, before the no-confidence vote, but the union said it decided it would be better to conduct the survey after the primary, when three board seats were up for grabs. Now that it's been rescheduled, the results will likely be released after the runoff for District 6.

UTLA has endorsed teacher Monica Ratliff and challenger Antonio Sanchez for the East San Fernando Valley seat, and Sanchez also has the support of the rival Coalition for School Reform. Sanchez has been vocal in his support of Deasy while Ratliff recently backed away from criticism of the superintendent and now says she would vote to keep him in his job.

Under Deasy's contract with the district, which pays him $330,000 a year, he can be fired with 30 days' notice by a majority vote of the seven-member board. 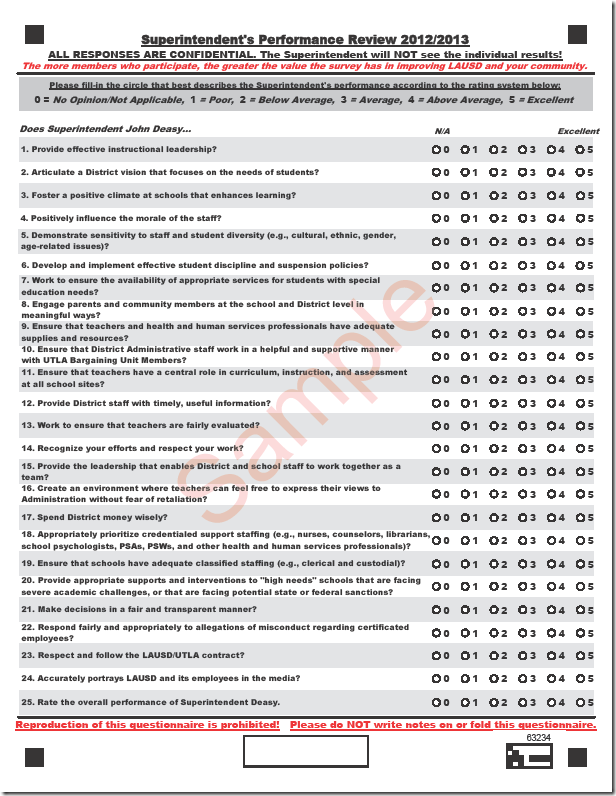