The school district says a decision by a state panel — determining there was test-score cheating but the teacher shouldn't be fired — sends the wrong message. 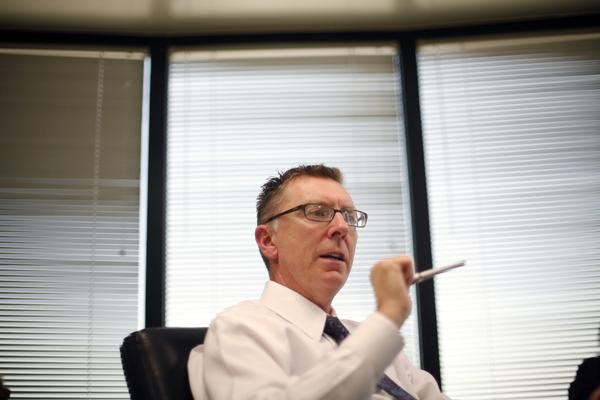 "The panel found the person guilty of cheating," L.A. schools Supt. John Deasy says, "and found it appropriate to put the person back in the classroom. It's completely beyond my comprehension." (Bob Chamberlin, Los Angeles Times / September 1, 2011)

He's a respected elementary school instructor who tutors students and coaches soccer on his own time.

But the L.A. Unified School District wanted to fire him for allegedly cheating to boost the test scores of his students.

The panel's verdict: Gonzales cheated, but he gets to keep his job.

That's the short version of a decision by the state's Commission on Professional Competence in January.

To the nation's second-largest school system, the case demonstrates that the school district, not the commission, should control the dismissal process for tenured teachers. And L.A. Unified wants cheating to become an irreversible justification for dismissal, as with sexual misconduct. Recent efforts to make such changes in state law, however, have crumbled under opposition from teacher unions.

"The panel found the person guilty of cheating," said L.A. schools Supt. John Deasy, "and found it appropriate to put the person back in the classroom. It's completely beyond my comprehension."

The L.A. teachers union has defended the process, saying it provides for just outcomes. It's especially necessary, officials said, because Deasy's zero-tolerance policy on misconduct results in dismissals for unproven or minor transgressions.

A tenured teacher can contest dismissal by appealing to the state Office of Administrative Hearings, which sets up panels consisting of an administrative law judge, a teacher chosen by the union and one selected by the school district to hear each case.

Since 2003, panels have heard 124 cases for such offenses as immoral conduct or gross insubordination, according to L.A. Unified. In 48 cases, the employee won back a job. Hundreds of other cases were settled prior to a verdict, with a resignation, for example, or were withdrawn. Hundreds more were resolved before reaching the state.

Students' scores on state tests spiked in Ricardo Gonzales' fifth-grade class in 2009-10. They were sharply lower before and after.

*Students, as a group, performed better than 60% of district 4th-grade classrooms.

**Students scored in the top 1% of their district peers.

L.A. Unified has revealed 11 cases of alleged serious misconduct over the last three years related to the annual state standardized tests. At least four of the instructors resigned; at least four others were fired. Two of the dismissals went to state panels. In one, the panel said the district hadn't proved cheating occurred. The other case was that of Gonzales.

The district moved to fire the 51-year-old instructor after extraordinarily high scores posted by his fifth-grade students at Hart Street Elementary in Canoga Park raised suspicions, both at Hart and at Woodland Hills Academy, a nearby middle school.

The students "were clearly not able to demonstrate achievement or skills comparable to those results," Woodland Hills math teachers told administrators, according to district records.

In May 2011, an investigation team interviewed 73 middle schoolers and 94 Hart students — as well as 16 Hart teachers, 14 teaching assistants, literacy and math coaches and the former Hart principal.

"The teacher checked the answers," one student told the district, according to an internal report. "It if was correct, he would say go on to the next question, but if it was wrong he would say, 'Check it.'"

"If I didn't know the meaning of a word, the teacher would give an example," said another.

"The teacher would write out the math problem on scratch paper and remind us of the steps," said a third, according to the district report.

Several students said they first marked answers on notebook paper or the booklet, then transferred them to the official answer sheet only after Gonzales checked for mistakes. (Teachers are not allowed to give students any help — that could render results invalid and lead to severe sanctions against schools.)

His 2009-10 pupils entered class performing better than about 60% of their L.A. Unified peers, according to an analysis by consultant Stephen Klein, whom the district hired to review data. In Gonzales' class, students rated in the top 1%. A year later, scattered among sixth-grade teachers in at least three different middle schools, they performed better than only 29% of district students in that grade.

The "only plausible explanation" was that Gonzales "inappropriately assisted several if not most of his fifth-graders," Klein said in a report to the district.

In 2010-11, when others began supervising the exams, his students' scores dropped sharply, according to the district. L.A. Unified fired Gonzales in early 2012.

In evidence presented to the panel, Gonzales said his 2011 students simply were less gifted.

Through Schwab, Gonzales declined to be interviewed pending a final resolution of his case.

After hearing from Klein and three students, the panel concluded that two of the three could have confused being helped on state tests with aid they received on the district's own periodic exams or practice tests.

The panel also found Gonzales a worthy person, someone who emigrated from Mexico as a youth and "persevered in school." He also "has a reputation as a dedicated and hard-working teacher" who developed "critical thinkers."

Gonzales "appears simply to have been extremely mistaken about whether he could better educate a student by improperly assisting her," the panel wrote.

The panel also faulted the "strong push" for improved test scores by the former principal.

District officials have contested any suggestion that school culture was to blame.

The school system has spent an estimated $280,000 on the case and refuses to reinstate Gonzales. It intends to appeal in Superior Court.