If public officials in the more than two dozen cities served by L.A. Unified want to do something to help kids succeed, there are plenty of things within their purview.

OpEd in the LA Times By Bennett Kayser | http://lat.ms/142Ykas 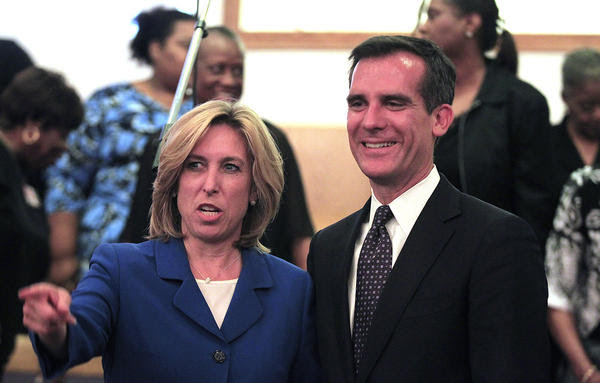 May 15, 2013  ::  For those who need reminding, I'll state it clearly: Neither the Los Angeles mayor nor the City Council has one lick of voting authority at the Los Angeles Unified School District. They can't set policy at the district, nor can they hire or fire its leaders. And when Mayor Antonio Villaraigosa tried to challenge that organizational structure, launching an unconstitutional attempt to take over the entire school district, the courts quickly slapped him down.

But those facts haven't seemed to stop candidates for city office from grandstanding about district schools, turning them into a political pinata as they attempt to score points with voters.

Bashing the district seems to be the default response when a candidate is asked a tough question about the city. Instead, we need elected leaders who are willing to pitch in and help.

L.A.'s school district faces huge challenges. More than three-quarters of its students live in poverty; about 29% haven't mastered English and an additional 13% are in special education classes. But despite that, even as class sizes have continued to rise and the budget has been slashed, students continue to make academic gains.

Part of that is due to sacrifices by district staff. District employees again took pay cuts this year so that children would continue to have after-school programs, art in elementary schools, early education opportunities, Academic Decathlon teams and an All-City marching band.

And yes, California just dropped to 49th in the nation in student funding.

Against this backdrop, there is an important role for elected officials to play, and it is one that goes far beyond politically motivated carping. A recent study noted that the average student spends just 18% of his or her life in school. The great bulk of a student's time is spent at home or out in the community. I'd love to hear the mayoral candidates commit to partnering with the district to create a better city for children.

If public officials in the more than two dozen cities served by L.A. Unified want to do something to help kids succeed, there are plenty of things within their purview: making communities safer, for example, or more economically vibrant and family friendly. Rather than looking east to cities where mayors have made power grabs to take over schools, they should look north to San Francisco, which stands as a model of how a city-school district partnership can work.

In Los Angeles a few years ago, the Department of Water and Power agreed to refund more than $100 million it had overcharged L.A. Unified and other public institutions. In San Francisco, public schools get deeply discounted electricity from the local utility under an agreement forged decades ago. While L.A.'s Metropolitan Transportation Authority recently shaved a small amount off the monthly bill of students traveling to schools on public transit, San Francisco recently instituted a program that allows low- and moderate-income students to ride for free. Many San Francisco museums are also free to students. And school policing costs come, for the most part, out of the San Francisco police budget, not the school district's. Furthermore, the city provides substantial funding to a variety of school programs, pursuant to an initiative approved by San Francisco voters, including for preschools, arts and student-support services.

If the mayoral candidates want more ideas for how they can lead on education, they might consider what Gavin Newsom did during his first run for mayor of San Francisco. He took the politically risky move of supporting additional city funding for schools. The measure he supported passed, and it has spared San Francisco schools from some of the worst ravages of state budget cuts.

Bennett Kayser, a member of the L.A. Unified Board of Education, is a former teacher and administrator.

But reality trumps legality– and Mayor Villarigosa was instrumental in the selection of the past two superintendents of LAUSD and has been influential (if not decisive) in every major decision made by the board of education during his mayoralty …probably more so than with the city council.