HAWAII’S EXPERIMENT IN FIXING SCHOOLS MAY HOLD LESSONS FOR CALIFORNIA 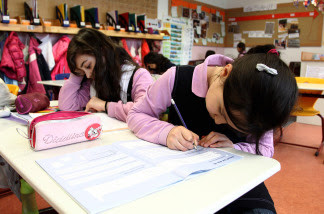 If there was ever doubt about the challenge of school reform, Hawaii’s multi-million dollar campaign is an expensive reminder of how difficult it can be. An ambitious plan to extend the school day by an hour has been scaled back to a small number of schools as the state grapples with growing pains and learning what worked and what did not.

The school-day expansion was funded by a $75 million, four-year Race To the Top grant in 2010. Hawaii was only one of a dozen to receive the grant from the Obama Administration. The state promised to use the money to build better data systems, expand science, technology, engineering and mathematics education and improve academic performance at 19 lagging schools.  Earlier this year, the U.S. Department of Education lauded the state’s efforts.

As part of the reform efforts, Hawaii ran an extended day pilot program at 19 campuses during the 2012-13 school year. An extra hour was added Monday through Thursday and teachers got another dozen days of training.

But only two of the 19 schools are close to signing agreements to continue the extended-day program next year.

Al Nagasako, executive director of the Hawaii State Teachers Association, told the Associated Press that the state didn’t give schools enough guidance on how best to achieve results, and it was hard to measure the effectiveness of any one change with so many going on at once.

Teachers also complained about the stress, saying the extra hour cut into family time, especially for those with long commutes to remote rural schools.