RONALD REAGAN AND THE DECLINE+FALL OF UC: How one Golden State icon helped tarnish another

Op-Ed By Seth Rosenfeld in the LA Times | http://lat.ms/17ReEwB 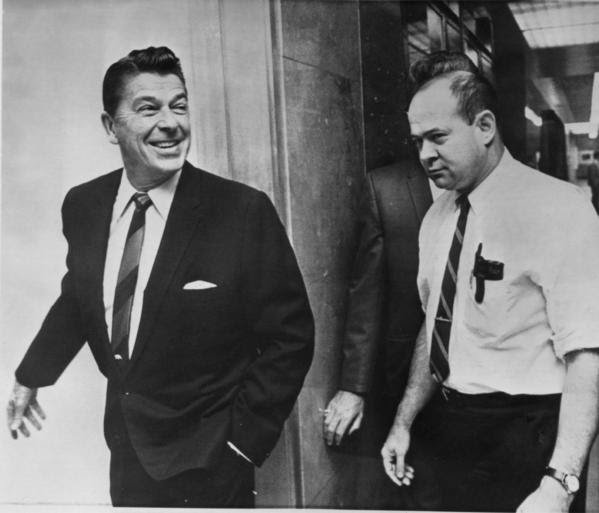 Ronald Reagan, left, is seen in 1968, when he was governor of California. Walking with him is his communications director Lyn Nofziger. (Associated Press )

May 10, 2013  ::  Once upon a time, the University of California was a sacred trust, the top tier of a model educational system that helped lift the state to unprecedented prosperity. It was jealously protected from outside political interference.

Now UC is more often described in profane terms. The state's entire higher education system has been under assault for decades — free access is long gone; investment per student has shrunk; some rankings have slipped. The passage of Proposition 30 last year will help repair some of the damage, but UC's stature has been diminished and with it the dream of a truly excellent education for every qualified native son and daughter.

The causes are complex and largely economic, but in an important way, the troubles of the nation's greatest public university can be traced to the ascent of a California icon, Ronald Reagan, and his brand of anti-government conservatism.

UC's downfall was eerily anticipated by a man Reagan made his scapegoat: Clark Kerr, UC president from 1958 to 1967. K

err, an economist and renowned labor arbitrator, sought to make a college education universally accessible. He oversaw the 1960 adoption of the influential Master Plan for Higher Education, coordinating the state's junior colleges, four-year colleges and universities to avoid redundancy, save tax dollars and deliver on the state's commitment to provide a quality education for its high school graduates.

The "multiversity" had become increasingly vital to society's success, Kerr observed in a series of 1963 Harvard lectures that would prove prescient. It was, he said — referring to the Soviet Union's not-too-distant launch of Sputnik — even crucial to national security. But its success depended on maintaining a delicate balance. If "class warfare" broke out among students, faculty, administrators and politicians, he warned, the entire enterprise was imperiled.

Kerr enjoyed the staunch support of Gov. Edmund G. "Pat" Brown and ample funding in a booming postwar California economy. And the state's flagship school, UC Berkeley, would be ranked the "best-balanced distinguished university in the nation" in 1964. But within the year, UC was teetering.

That fall, Mario Savio and other UC Berkeley students, inspired by the civil rights movement, challenged a decades-old ban on students using the campus to advocate for off-campus causes. Kerr would later acknowledge that he should have reversed the ban quickly. As it was, thousands of students surrounded a campus police car on Sproul Plaza, held it captive for 32 hours, and then staged what became the nation's largest sit-in. By December, the Free Speech Movement, with broad campus support, had forced the university's Board of Regents to concede the ban was unconstitutional. The FSM was followed by even larger antiwar demonstrations and growing ranks of long-hairs on campus.

Many Californians, accustomed to the well-groomed and complacent students of the 1950s, were horrified. Reagan, campaigning against Brown for governor in 1966, deftly exploited their outrage. He expanded his longtime platform against taxes and big government to make campus unrest, and Berkeley in particular, his hottest issue.

For example, in a major campaign address that May, Reagan declared: "There is a leadership gap, and a morality and decency gap, in Sacramento. And there is no better illustration of that than what has been perpetrated … at the University of California at Berkeley, where a small minority of beatniks, radicals and filthy speech advocates have brought such shame to … a great university."

Reagan went on to charge that left-wing professors were using Berkeley's classrooms as a "political propaganda base," that undergraduate applications were plummeting and that professors were quitting at three times the normal rate. He offered no evidence for these charges. When Kerr countered that undergraduate applications were actually up 35% over the prior year, Reagan claimed that UC had lowered its standards to achieve those numbers. In fact, the standards had not changed since 1960.

Reagan's rhetoric helped carry him to a landslide victory that November.

Within days of taking office, the new governor sent the university a message. His plan to cut UC's budget and impose what amounted to the first tuition in its 99-year history was front-page news. Several weeks later, he and his new appointees to the regents cast the votes necessary to fire Kerr.

Gov. Brown had assiduously stayed away from regents meetings to avoid putting political pressure on the university, whose independence is enshrined in the state constitution. Reagan made a show of attending and often held news conferences.

And he continued his attacks. He complained about "subsidizing intellectual curiosity." His auditors suggested that UC sell its rare book collection to generate state revenue. He thrust the governor's office into areas traditionally left to campus officials, such as screening faculty appointments.

Reagan's battles with Berkeley reached a climax in 1969 with the protests over a parcel of university land known as People's Park. Some demonstrators were violent, but law enforcement forces under his authority overreacted and shot dozens of bystanders with birdshot and buckshot. Reagan then imposed martial law on Berkeley, and his military chief dispatched a helicopter that spread tear gas into schools, homes and a hospital.

It is undeniable that the University of California would have faced serious challenges in the years after the 1960s, some of its own making. State spending on education would surely have been cut, not least because Proposition 13 severely reduced state revenue. (Reagan's anti-tax pronouncements helped pave the way for this "taxpayer revolt.")

But it is also undeniable that Reagan set a precedent for UC-bashing. He tarnished the once-esteemed higher education system, invited political intrusions and convinced many citizens that public spending on it was a waste.

Today, state spending per student at UC (adjusted for inflation) is at an all-time low. For the first time in California's history, young adults are less likely than their elders to have graduated from college, according to the Public Policy Institute of California, and by 2025, the state will graduate just one-third the college-educated workers it needs. One of the nation's greatest public universities has become a symbol of beleaguered higher education, just when we most need well-trained people to meet unprecedented challenges.

When Clark Kerr was installed as UC's president, he cited the "immeasurable benefits" the university had derived from the "long vision and the understanding of the legislators and officers of our state." As that "enlightened and friendly environment" has eroded in the decades since, so has the education of successive generations — and the prospects for California's future.

Seth Rosenfeld is the author of "Subversives: The FBI's War on Student Radicals, and Reagan's Rise to Power," which received the 2013 Ridenhour Book Prize.