U P D A T E D: LAUSD BOARD COULD BAN SUSPENSIONS FOR ‘WILLFUL DEFIANCE’ + smf’s 2¢

Backers of the resolution say 'zero tolerance' is harming kids. 'Instead of punishing students, we're going to engage them,' says one supporter. 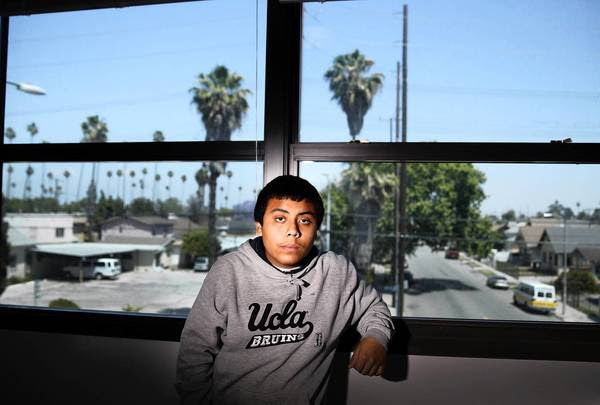 David Chinchilla, 15, of Augustus Hawkins High School in South L.A., was suspended for interrupting and cursing at a teacher. But he and the teacher also engaged in a "restorative justice" exercise in which they exchanged letters, each taking some blame and pledging to better cooperate. They shared their letters with the class. (Allen J. Schaben, Los Angeles Times / May 10, 2013)

May 12, 2013, 5:26 p.m. ::   Damien Valentine knows painfully well about a national phenomenon that is imperiling the academic achievement of minority students, particularly African Americans like himself: the pervasive and disproportionate use of suspensions from school for mouthing off and other acts of defiance.

The Manual Arts Senior High School sophomore has been suspended several times beginning in seventh grade, when he was sent home for a day and a half for refusing to change his seat because he was talking. He said the suspensions never helped him learn to control his behavior but only made him fall further behind.

"Getting suspended doesn't solve anything," Valentine said. "It just ruins the rest of the day and keeps you behind."

But Valentine, who likes chemistry and wants to be a doctor, is determined to change school discipline practices. He has joined a Los Angeles County-wide effort to push a landmark proposal by school board President Monica Garcia that would make L.A. Unified the first school district in California to ban suspensions for willful defiance.

That offense is now widely criticized as an arbitrary catchall for any behavior a teacher finds objectionable, such as repeatedly tapping feet on the floor, refusing to remove a hat or failing to wear the school uniform. It accounted for 48% of 710,000 suspensions issued in California in 2011-12, prompting both state and local efforts to restrict its use in disciplinary actions.

Passage of the resolution, which is scheduled for a vote by the L.A. board of education on Tuesday, would mark a watershed moment in a long battle by community activists against "zero tolerance" policies adopted after the Columbine school shooting in Colorado more than a decade ago.

"This will be a transformational shift," said Tonna Onyendu of the Liberty Hill Foundation, a Los Angeles nonprofit that is coordinating the campaign for the Garcia proposal, along with more than a dozen other groups. "Instead of punishing students, we're going to engage them."

Not all educators support efforts to restrict their disciplinary authority — and, citing similar concerns, Gov. Jerry Brown vetoed a bill last year that would have barred the expulsion or suspension of defiant students. Sergio Garcia, principal at Artesia High School in Lakewood, said administrators should have wide discretion in how to handle disruptive students, whom he said studies have shown reduce classroom learning time 25%.

"To remove the tool we have that allows other kids to learn is the wrong direction," Garcia said.

The discipline reform effort comes amid mounting research findings that show kicking students out of school does not transform their behavior but only places them at higher risk of dropping out and running afoul of the law.

And a disturbing finding has surfaced: African Americans are bearing the brunt of the harsh discipline policies. Statewide, black students are three times as likely as whites to be suspended; in L.A. Unified, 26% of those suspended in 2010-11 were African Americans although they make up 9% of students.

Such disparities are also evident nationwide, drawing the attention of the federal government. The U.S. Department of Education's civil rights office has launched investigations in North Carolina, Louisiana, Massachusetts, Florida and elsewhere on whether discriminatory suspension policies are violating the civil rights of black students.

In L.A. Unified, Garcia said her proposal is the next step in the leading role the district has played in reforming school discipline practices. In 2007, the school board directed all campuses to adopt a research-backed approach to better student behavior using positive incentives after CADRE, a parent organizing group in South L.A., led a major campaign with others to reduce suspensions.

Two years ago, L.A. Supt. John Deasy put a greater focus on gathering data to monitor suspensions and made progress in reducing them part of his own performance review. He said he backs the Garcia resolution, which would eliminate willful defiance as grounds for suspension; instead, alternatives would be used, such as positive incentives and efforts to repair the harm caused known as restorative justice.

"Willful defiance has become a vehicle for getting rid of kids who are not achieving," Deasy said, calling the effect on black males "a gross disproportionality."

Some teachers and administrators are anxious about whether they will be given the training and time to tackle a new approach.

At Augustus Hawkins High School in South L.A., a team of four teachers is leading efforts to bring such restorative justice practices to campus. In one recent case, ninth-grade teacher Katie Rainge-Briggs said she suspended a student for interrupting her and cursing. But rather than leave the problem unresolved, she took up a suggestion by the restorative-justice team leader that she and the student exchange letters. They did, each taking some blame and pledging to better cooperate. Then they shared the letters with the class.

"It was an effective process," said the student, David Chinchilla, 15. "We talked about what happened and were friends at the end of the day. Without that, it would have been weird between us."

Tony Terry, principal of one of the campus' three small schools, said his staff is committed to forging a new disciplinary direction. But he said it was more time-consuming, with each mediation taking 45 minutes or more at a time of major cuts in counselors, assistant principals and other support staff to help handle them. And the training, he said, is supported by outside funding — a $15,000 grant from UCLA.

"I agree with the fundamental idea that we do not want to prevent student access to instructional time," he said. "But you can suspend a student with a lot less time than it takes to do a mediation. If the resources were in place, I think more administrators would be willing to forgo suspensions."

That concern has also been voiced by the district administrators' union, the Associated Administrators of Los Angeles. United Teachers Los Angeles, meanwhile, is still studying the proposal, a spokeswoman said.

Looking back on his own suspensions, Valentine, 16, said he wished teachers had taken more time to talk with him, hear him out, even step in to cool him down before his temper exploded. By working for a change in school discipline practices, he said, he can help make that happen for other students.

"It's about helping kids in our community go to college instead of being suspended," Valentine said, adding that he has avoided any suspensions so far this year. "I can really help make a difference in their lives.

The Los Angeles Unified School District could move to ban suspensions of students who choose to defy rules. The board will deliberate on the bill tomorrow.

In this file photo, the downtown Los Angeles skyline is seen with the snow-capped San Gabriel Mountains in the distance. Robert Harbison/The Christian Science Monitor/File

May 13 2013 - Los Angeles   ::  The Los Angeles Unified School District could become the nation's first to ban suspensions of students who are willfully defiant.

The school board on Tuesday is scheduled to consider the ban, which is supported by the school superintendent.

Currently, students can be suspended for refusing to remove a hat or cursing the teacher.

The Los Angeles Times says willful defiance suspensions accounted for nearly half of all California suspensions in the 2011-2012 school year. Black students were disproportionately affected.

Critics say it's a catch-all way of getting rid of underachievers that hurts the student but does nothing to solve behavior issues.

smf: Sometimes the Board of Ed is so far behind the curve as to be laughable. Whiff! Mixing that metaphor: Having swung-and-missed and sent down by Mudville to to some lesser league they are running down the platform – trying to catch the train that has already left the station. Welcome aboard.