Cumberland County Coroner Gary L. White said an autopsy of Caroline Starks showed the toddler had died from a single shot from the .22-caliber rifle. The death has been ruled accidental and no charges will be filed, he said in a telephone interview with the Los Angeles Times.

“Most everybody in town is pretty devastated by this,” White said. “Nobody wants to take anyone’s guns away, but you’ve got to keep them out of harm’s way for the kids. It’s a safety issue.”

The girl, Caroline Starks, was in her Burkesville, Ky., home when her brother fired the rifle he had been given as a birthday present about 1 p.m. Tuesday. The mother had just stepped outside the house for a moment, White said. The child was pronounced dead at Cumberland County Hospital.

“The little Crickett rifle is a single-shot rifle and it has a child safety,” White said. “This was just a tragic accident.”

The child safety lock was in place and operational, White said. Officials believe a shell had been left in the weapon from the last use and no one realized it.

“In my fifteen years as coroner, this is the first such case,” he said. “It is very, very rare.”

It is legal in Kentucky to give a child a rifle as a gift, White said. Nor is it unusual for children to have rifles, often passed down from their parents, he said.

Earlier this month, Brandon Holt, 6, was accidentally shot to death by a 4-year-old playmate in New Jersey. 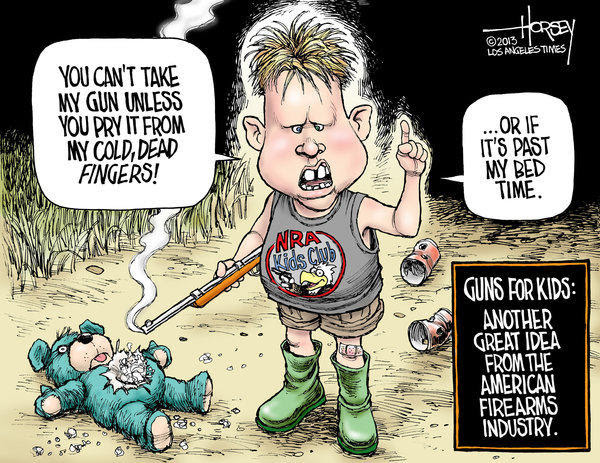 May 3, 2013, 5:00 a.m.  ::  This week, a 5-year-old Kentucky boy was playing with the mini-rifle he had gotten as a gift and ended up shooting and killing his 2-year-old sister. Apparently, even kindergartners have a right to keep and bear arms that shall not be infringed.

For many people, it was a revelation that there are companies that manufacture guns specifically for children. The boy in question had a Crickett rifle, a smaller version of an adult weapon designed specifically for little trigger fingers. The guns come in a variety of happy colors, including pink and even swirls.

Some people think giving guns that shoot real bullets to kids is a rather insane idea, but not folks in the gun culture, where it is perfectly normal. A state legislator in Kentucky, Rep. Robert R. Damron, insisted that the kiddie rifle was not the problem.

“Why single out firearms?” Damron asked, according to the Associated Press. “Why not talk about all the other things that endanger children too?”

Well, perhaps because, in this case, a child died -- not because she swallowed a toy or fell off a playground swing, but because her brother, who probably cannot yet even tie his shoes, had been entrusted with a lethal weapon.

I suppose someone will suggest that giving guns to children under 3 feet tall should be outlawed, but such a law would certainly be opposed by the National Rifle Assn. as the first step down a slippery slope toward confiscating all guns and enslaving America. Maybe a better idea would be to fine anyone idiotic enough to put a gun in the hands of a tiny child. Possible? Naw, the NRA would kill that idea too. The gun lobby depends on a legion of idiots.

But, hey, here’s an idea the NRA could support: Arm 2-year-olds so they can defend themselves. A toddler militia -- what could be more American?