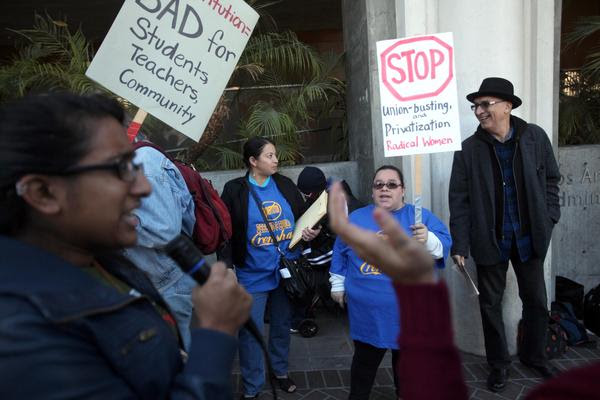 May 29, 2013, 4:42 p.m. ::  More than half of the teachers and staff at Crenshaw High School, including two teachers union representatives, are being displaced by a campus reorganization process ordered by L.A. Supt. John Deasy earlier this year.

In January, the school board endorsed Deasy's plan to remake the traditional high school into three magnets and require teachers to reapply for their jobs. The move came after years of high dropout rates and low student test scores.

Student action clubs conducted a survey on campus after the board's vote and presented its results at a meeting this week. A majority of the students surveyed said the school didn't have adequate time or resources to prove its potential.

Students and community members voiced their concerns this week about the changes at the Brotherhood Crusade Youth Resource Center near the Leimert Park campus.

The school received Ford Foundation and federal funding when it was restructured previously. But that funding will no longer be available after the district reorganization. Test scores improved in 2011-12; the Academic Performance Index score was 569, the district target is 800.

Of the 62 teachers who reapplied for their jobs, 29 were selected. Fewer than 10 elected not to return, said Cathy Garcia, a Crenshaw math instructor and teachers union representative who was among those displaced.

"The kids are being traumatized after witnessing the upheaval [the reorganization] is causing," said Angelita Parker, whose daughter is a senior at Crenshaw. "Their grades are being affected because they're losing their mothers away from home: the teachers."

Some in the community say the survey and protests should have happened earlier, when the reorganization was first discussed.

"We knew this was happening," said Ahren Dessert, who will graduate from Crenshaw's gifted magnet in a few weeks. "This all should have happened last year."

Still, some say the gatherings might not change the district's course of action, but it could be beneficial to the community as a whole.

"We're letting people know what happened here," said Meredith Smith, who started teaching at Crenshaw in 1991. Her last day is June 30, after which she will interview for openings at other campuses.

The district responded to the survey Tuesday, saying the transformation is a group effort.

"Students, parents, alumni and community members helped create these educational programs and assisted in the selection process for faculty and staff," said George Bartleson, director of intensive support and intervention at L.A. Unified.

"The district, as well as the school's staff, believes the changes will establish rigorous academics, allowing all Crenshaw students to graduate college- and career-ready."

The 17-year-old junior will return for her senior year to unfamiliar teachers, she said.

"Who will be the teachers who will give me letters of recommendation?" Shakur said, referring to the letters needed for college applications. "Who will have known me and what I've gone through during the last three years?"