AN OPEN LETTER FROM ONE UTLA TEACHER TO THE UTLA BOARD OF DIRECTORS: “I am totally befuddled by your school board endorsements”

AN UTLA Teacher/4LAKids reader wrote the UTLA Board – and asked 4LAKids to publish the concerns. The letter included the sender’s  name and return address (they know whom he or she is)  but asked that it be deleted from publication

Subject: Your School Board Endorsements

Dear UTLA Board of Directors (and other UTLA officers),

I have been a teacher (and UTLA member) in LAUSD since 2002. Thank you for your work on our behalf.

The composition of the LAUSD school board can make a lot of difference to both the quality of education in the district, as well as our rights as teachers, etc. It is good and correct that UTLA gets involved in school board races, makes endorsements, etc. Most of your endorsements make sense. (For instance, supporting Zimmer in the recent primary, and opposing Monica Garcia.)

However, I must honestly say, that I am totally befuddled by your current dual endorsement (for the same seat) in the current school board election of May 21. IMO that dual endorsement makes no sense at all, is a total waste of member’s union dues and/or PACE contributions (if either or both are being used in the race), is not at all helpful to the future of the district, and appears so inane, that it could only give UTLA a negative reputation.

First of all, it makes no sense to endorse both candidates in a two-way race, in which only one can win. One endorsement cancels out the other. (Did you hear of anyone endorsing both Obama and Romney in the 2012 presidential election? Endorse both Bush and Gore in 2000? I did not. That would not have made any sense, and neither does your dual endorsement.) Is UTLA member money being used to support both candidates, so that they can run negative ads against each other?  Just imagine! (If any member money, whether dues or PACE, is being used to support both candidates running against each other, that is a very irresponsible waste of member’s money, and certainly will not encourage people to join PACE.) If you cannot make up your mind who to support in a two-way race, then the thing to do is to be neutral, to support neither. You cannot support both candidates in a two way race. That is simply ridiculous, I don’t know how else to put it.

That said, I don’t know why you would be undecided. The choice in the race seems very clear, just as clear as Zimmer vs Anderson in the primary, with the same forces at work. There should be no doubt who UTLA should support.

On the one hand there is a candidate who is a teacher and UTLA member, who seems to have many good ideas about education, Monica Ratliff. She is fully endorsed by the new PAC of Diane Ravitch, “Network for Public Education” , as their first endorsement. (Please read about that endorsement here.) (I would suggest too, that UTLA recommend to its membership to join and contribute to Diane Ravitch’s PAC, to help fight off the big money coming in from the likes of Bloomberg, Gates, Broad, etc.)

The other candidate, Antonio Sanchez, is a lawyer with no background in education. He is heavily supported by the exact same coalition that threw big money behind Kate Anderson and Monica Garcia in the primary, led by the likes of Michelle Rhee, Bloomberg, Gates, Broad, etc., as well as our nemesis John Deasy. They are now putting that same kind of money behind Sanchez. They must have a reason for doing so. He must have promised something to them in return for that kind of support. Please read this article about a $350,000 donation to Sanchez from Bloomberg, via Villaraigosa’s school PAC.) (In case anyone reading cannot access that article in the LA Times, I will paste the article at the bottom of this e-mail.)

There really should be no question who UTLA and teachers should support in this race—a teacher, on our side, and the side of the children of the district, supported by Diane Ravitch, or a lawyer heavily supported by our enemies, John Deasy and the corporate “reformers” who are destroying education in this country.

The make-up of the new LAUSD school board can make a lot of difference in what transpires in this district in upcoming years. UTLA has had a positive influence on the process in the past, supporting candidates like Bennett Kayser and Steve Zimmer, and opposing the likes of Monica Garcia.  UTLA could really make a difference this time too, by immediately ending the totally absurd “dual endorsement”, and throwing its full weight and influence behind Monica Ratliff. There is only just over a week left in the race. Please make that change today, and do what is right to try to positively influence the future of LAUSD. 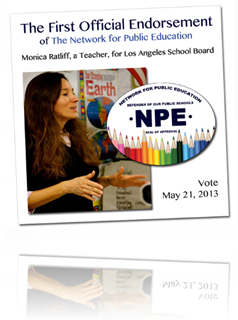