PLAN WOULD CLOSE HALF OF L.A. UNIFIED’S REGIONAL HEADQUARTERS

January 24, 2012 |  6:24 pm :: Officials with the Los Angeles Unified School District are fashioning a plan to reduce the number of regional headquarters by nearly half, The Times has learned. 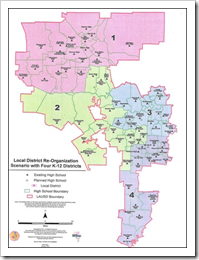 The plan is still under development, but would probably reduce these offices, which are spread across the sprawling school system, from eight to four. A fifth division would oversee campuses that merit especially close attention, such as persistently low-performing schools or those with a non-traditional structure.

Cutting down the number of regional offices has been a longtime demand of United Teachers Los Angeles, which argued that such a move would save money and reduce unneeded bureaucracy within the nation’s second-largest school system. The union has not taken a position on the current district proposal.

Regional offices already had been reduced from 11 to eight during an earlier cost-cutting effort. But officials had resisted further reductions to these outposts, which are called “mini-districts” or “local districts.” These operations have provided supervision and services to schools within their areas. In some cases, they also spared parents and employees of having to travel to district offices downtown to deal with various issues.

But now top officials are prepared to argue that the cutback would improve services and also save millions of dollars. L.A. Unified is under pressure to pare next year’s budget by more than $500 million.

Documents obtained by The Times [published last Thursday in 4LAKidsNews] map out the plan as follows: Most of the San Fernando Valley would be in one district; most of the Westside in another; a third district would include downtown and Eastside schools; the fourth would serves cities in Southeast L.A. County and stretch south to the Harbor area.

L.A. Unified has a long history of reorganizing itself, usually with the idea of saving money, but that goal hasn’t always been achieved, and staffing levels have generally crept back upward. The recent recession, however, has resulted in a significant decrease of employees at district headquarters, not to mention cutbacks at school sites. Thousands of employees have lost work in the process, while class sizes have increased and services to students and employees have been diminished.