Quality Counts: CALIFORNIA STUDENT SPENDING NEAR BOTTOM: By some other measures, middle of the pack

California schools are the poster child for Gov. Brown’s new budget mantra that the state can’t spend what it doesn’t have. The latest Quality Counts report from Education Week ranks California 47th overall in how much it spends per student – $8,667 when adjusted for regional cost differences, about $3,000 below the national average of $11,665.

This is a drop over last year, when California spent $8,852 per pupil, with a ranking of 43rd in spending adjusted for regional cost-of-living variations. Of course, that was before the state faced a nearly $27 billion deficit.

The state also falls short when it comes to education spending as a percentage of state and local taxable resources. That comes to 3.3 percent according to the report, putting California in 40th place. The national average is 3.9 percent. For another perspective, Vermont puts 6 percent of its taxable resources into education; and even Texas does a little better than California at 3.7 percent.

The picture is better in the equity analysis. California ranks 12th on a measure called the wealth-neutrality score. This is defined by EdWeek as the “degree to which state and local revenue are related to the property wealth of districts.” The state’s 0.038 average means that poorer districts receive more funding than wealthy ones on a weighted per-pupil basis.

It’s interesting to note the differences in where states get the bulk of their education funds. In California in 2008-09, local revenues contributed $21 billion or 29.6 percent; another $9.2 billion, 13 percent,  came from the federal government (above the national average of 9.6 percent); the state ponied up the remaining $40.6 billion. Nationwide, according to the National Center for Education Statistics, state shares ranged from a low of 27.6 percent in Illinois to a high of 85.7 percent in Vermont.

Mixed bag on other measures

EdWeek’s 16th annual report grades states based on their performance in 18 measures divided among six areas of policy and performance. In addition to finance, they include chance for success; the teaching profession; K-12 achievement; standards, assessments, and accountability; and transitions and alignment.

Overall, the state landed pretty much in the center of the bell curve, four-tenths of a point below the national average of 76.5. Even the top-ranked Maryland only pulled off a B-plus.

California needs improvement in some areas, but also did very well in a few. It’s like the saying goes, even a blind chicken finds a kernel of corn now and then. California found its kernels in standards, assessments, and accountability – at least partly. When it comes to standards and accountability, California is the tops, straight As. But not so much on how well we measure them; that’s just good enough for a C-plus. 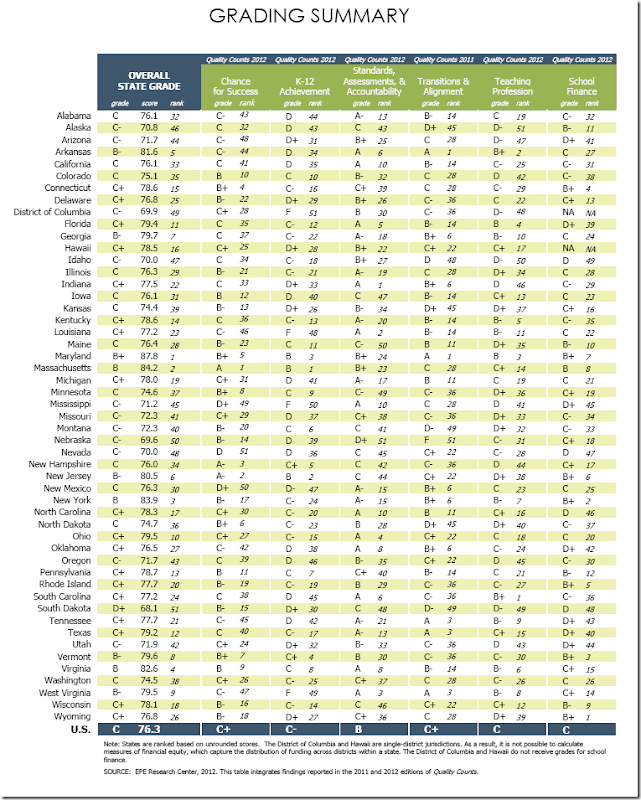