01/24/2012 07:08:46 PM PST  ::  Superintendent John Deasy is taking the first steps in restructuring Los Angeles Unified, with a plan that would thin the district's administrative ranks and redirect resources to improving classroom instruction.

Under a draft of the proposed reorganization obtained by the Daily News, [published last Thursday in 4LAKidsNews] LAUSD's eight local district offices would be squeezed down to four, with a new structure that diversifies administrative responsibilities. A fifth office would be responsible for overseeing the overhaul of dozens of low-performing schools.

The plan would cut 64 of the system's 311 administrative positions, shaving nearly $6.3 million from a deficit of nearly a half-billion dollars.

Deasy was out of town Tuesday and could not be reached for comment. However, Jaime Aquino, the deputy superintendent of instruction, said the plan is designed to help improve student achievement while saving the district money.

"This is an opportunity to reimagine what a new LAUSD should look like - with limited resources but that better addresses the needs of students," said Aquino, who crafted the plan. 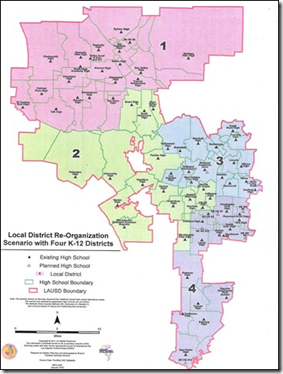 The new plan puts Aquino in charge of the five area superintendents who, in turn, would oversee a network of instructional directors responsible for a small portfolio of schools. The local superintendents also would supervise "teaching and learning support" coordinators, who would provide professional development within their academic specialty.

Each local district would also have administrators to handle facilities and operations, and oversee parent and community issues.

"Right now, the eight local district superintendents handle everything," Aquino said. "The new structure would let a local superintendent target achievement, teaching and learning ... This puts the focus of the district more in the core of our work, which is improving instruction."

Judith Perez, president of Associated Administrators of Los Angeles, the union that represents the district's middle managers, said she was awaiting more information from LAUSD and had no comment on the plan.

Under the current system, the eight local districts include two that divide the San Fernando Valley into east and west regions.

The new plan would put most of the Valley within a single, sprawling district. The North Hollywood and Valley Glen neighborhoods would be swept into a district stretching from the Pacific Palisades to the Fairfax District and south to Westchester.

Hollywood, downtown and East Los Angeles would encompass a third district, and the fourth would stretch from South L.A. to San Pedro.

Even if voters approve proposals for a parcel tax in LAUSD and a statewide sales tax hike to boost education funding, Deasy has said he'll have to make drastic cuts to LAUSD programs.