…with little or no benefits

Getty Images - Teachers and supporters demonstrate outside a Los Angeles Unified School District Board of Education meeting on April 14.

Saturday, Jan 7, 2012  |  Updated 5:59 PM PST - Teachers in the Los Angeles Unified School District fear that 2012 will be far worse than the past several years combined with hundreds of millions of dollars in more cuts and thousands more teachers being laid off.

Some teachers who have received their pink slips are being hired back, but as a sort of substitute for themselves in what has become a typical cost-saving measure by LAUSD.

California schools face another $5 million in cuts next year, which means more layoffs on top of the thousands of LAUSD teachers who have been let go, but they’re not the only ones being affected.

"As these layoffs and cutbacks proceed, the quality of the education of the students is going down further," said Neil Chertcoff, retired teacher. 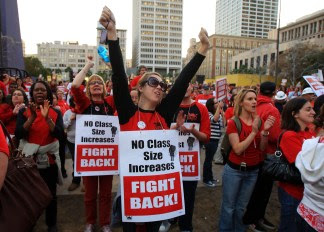 Although school district officials claim to be cut to the bone, some teachers insist there are still millions to be saved in contracts and consultants.

But they also see their own union as part of the problem and accuse United Teachers Los Angeles of being too cooperative with the LAUSD.

"They have not done any proactive activities, they have not mobilized the thousands of teachers that they have," said John Fernandez, retired teacher.

Taking matters into their own hands, teachers and their allies hope to rally the public against the system, a task they said the Occupy movement proved possible.