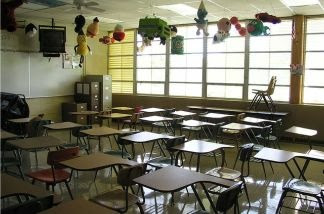 7:36 p.m. :: When a 16-year-old Orange County sophomore couldn’t afford to buy her Spanish class workbook, the teacher wrote her name on the whiteboard up front, and there it remained for weeks.

Her story, and a similar tale of a 14-year-old Orange County student, are the basis of a more than year-old class-action suit filed by the American Civil Liberties Union against California.

The suit argues the state has failed to protect children's constitutional right to a free education by allowing school districts to charge for books and other educational supplies. The ACLU says it's the state's responsibility to set up a system to ensure districts follow the law.

State officials have argued it is up to the local districts to make sure schools abide by the law.

In a series of twists and turns, the paper trail for Doe v. State of California goes back to September 2010. Earlier today, Los Angeles Superior Court Judge Carl West denied a motion to dismiss the case, made by the state, California Board of Education, superintendent of public instruction Tom Torlakson, and California Department of Education.

"Judge West's decision is the first case in California history that holds  that the state has an affirmative duty that all children are permitted to go to school without being charged any fees for educational [materials]," said Mark Rosenbaum, chief counsel of the ACLU of Southern California. "...State officials can't sit on the sidelines while children are being required to bear the burdens of the budget problems in this state."

Torlakson was unavailable for comment but he issued a statement regarding the ruling:

"Today's ruling is not a final judgment on the merits, but only the Court's initial determination as to whether the education parties should be included in this action. I still believe that under the law, we have complied with all our obligations to ensure all students are entitled to a free education."

[The California Department of Education posted an update on student fees in November.]

The lawsuit was based on a somewhat cursory online investigation by the ACLU conducted over several hours in which it found at least 32 schools throughout California required students to pay for educational materials.

The suit alleges that this is a discriminating practice against lower-income children that results in an unfair system that favors wealth.

“Right now the default is, if you’re a student who comes from a low-income family, and you're told you have to go out and buy your textbooks, the only way you can protect that right [to a free education] is to go out and hire a lawyer," said Brooks Allen, the director of education policy for the ACLU of Southern California.

Watch a video in which 14-year-old "Jason Roe" (cited in the case) tell his story:

According to court documents, in the months after the suit was filed it looked as if the state's officials were working to address issues.

In November 2010, the California Board of Education unanimously approved a staff recommendation that the board of education president and superintendent of public instruction jointly draft a letter to the California public school districts informing them that charging mandatory student fees for educational activities violates the state constitution and request they review their policies to ensure this was not happening.

In December 2010, then-Gov. Schwarzenegger (at the time named in the case), sent a letter to all county and local public school superintendents urging them to review their policies and practices to ensure they weren’t charging students illegal fees. Schwarzenegger said, according to the court documents, his administration was “evaluating options to establish a state-level process that will help identify impermissible fees to help ensure that districts and schools honor the free schools guarantee.

Last January, California Assembly Member Ricardo Lara (D-Bell Gardens) introduced AB 165, which would have included a number of measures to deal with the issue, including adding it to districts’ uniform complaint process as well as requiring regular compliance audits. The bill passed in both houses but was vetoed by Gov. Jerry Brown in October, who said it "goes too far."

As for what happens next, all parties return to court March 8.