Parents file petitions seeking to convert Desert Trails Elementary to a charter school. They acted under a landmark state law that gives parents the power to force major change at low-performing schools.

Parents deliver petitions to the principal of Desert Trails Elementary School in Adelanto. They are seeking to have Desert Trails converted to a charter school. (Irfan Khan / Los Angeles Times / January 12, 2012)

January 13, 2012 | By the fifth grade, Vanessa Diaz was reading only at a second-grade level at Desert Trails Elementary School in the high-desert community of Adelanto. But with a new reading teacher this year, the 11-year-old has made two years of progress in four months. 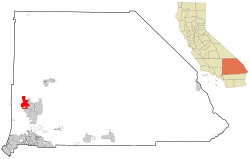 Adelanto is a city in San Bernardino County, California about 9 miles (14 km) northwest of Victorville. (WIKIPEDIA) >

That convinced her mother, Doreen Diaz, that a major overhaul was needed at the school where students are from low-income families and more than two-thirds of sixth-graders failed proficiency tests this year in math and English. So she joined with more than 280 parents to take matters into their own hands.

In the second test of a landmark California law giving parents unprecedented power to force major change at low-performing schools, Diaz and others submitted petitions Thursday to the principal asking that Desert Trails be converted to a charter school. The signatures represent nearly 70% of the 665 students.

"It felt really good to finally be speaking for our children and taking back our right to fight for them," said Diaz, who turned in the petitions with about 100 other parents.

The "Parent Trigger" law, passed in 2010, allows parents at low-performing schools to petition for new management, new staff and programs or for the campus to be closed or converted into a publicly financed, independently run charter school. The first test case was in the Compton Unified School District, but the effort has been mired in controversy over the petition process and remains tied up in court; parents ultimately succeeded in bringing a charter school there through a different process.

In Adelanto, the process has been transparent and fair, said Gabe Rose of Parent Revolution, the Los Angeles educational reform group that helped train and organize parents in both cities. He said Desert Trails parents contacted his group last year to ask for assistance.

The Adelanto school board will have 40 days to verify the signatures and respond. Board President Carlos Mendoza could not be reached for comment. But Assistant Supt. Ross Swearingen said he planned to meet with parents Friday "to discuss what they're looking for and how we can work together."

Principal David Mobley, appointed to Desert Trails just three months ago, said the school's biggest problem is widespread division among parents, teachers and others. He said he is planning a series of meetings with the different parties "to get everyone on the same page."

LaNita M. Dominique, president of the Adelanto district teachers' union, said she reached out several times to parents involved in the petition effort but that her overtures have been ignored.

"My association wants the same thing parents want, and that is what's best for our students," she said. "We are still willing to meet."

Diaz said the parents would prefer to work within the district to make changes rather than bring in an outside charter group. They have formed a nonprofit organization, Desert Trails Kids First, and want the power to hire their own principal with broader authority over school budgets, curriculum and the hiring and firing of teachers.

Larry Lewis, who served as Desert Trails principal last year before stepping down for health reasons, is a board member of the new organization. He said he was frustrated that efforts to hold teachers and staff more accountable — through evaluation systems using student performance measures such as test scores — were resisted and even "openly sabotaged." Dominque denied that teachers sabotaged his efforts.

If the district does not meet their demands, Diaz said, parents will seek to start their own community charter school.

"These parents are showing what organized, empowered parents can accomplish," Rose said. "They are using Parent Trigger to get the leverage to get the type of schools they want."