By Associated Press from the San Francisco Chronicle | http://bit.ly/yfuZGd

Tuesday, January 10, 2012 | 16:30 PST Los Angeles, CA (AP)  :: The Los Angeles Unified school board wants to stem the decade-long decline in enrollment that has cost the district hundreds of millions over dollars in per pupil funding.

The school board on Tuesday discussed moves such as developing a strategy to increase enrollment, which currently stands at 665,000 as compared to a peak of 747,000 in 2002.

School board member Steve Zimmer says the district should expand special programs such as foreign language immersion and international baccalaureate that have waiting lists as a way to attract pupils.

Other board members suggest the district adopt an open enrollment policy to allow parents to enroll their children at schools anywhere in the district, not just in their neighborhood.

The proposals are slated for action at next week's board meeting. 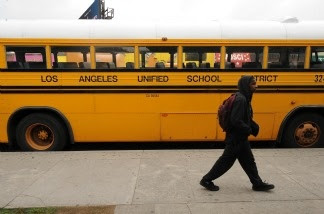 6:00 a.m. | L.A. Unified’s school board is set to start discussion Tuesday on a motion that could do away with enrollment boundaries for L.A. Unified neighborhood schools.

The motion’s author, L.A. Unified Board President Monica Garcia, would like to see L.A. Unified parents send their children to the district school of their choice.
"Wouldn’t that be an amazing kind of opportunity?" said Garcia. "LAUSD is moving on reducing the dropout rate and increasing the graduation rate. [...] We have to find ways to increase our own capacity as a district."

Garcia says magnet schools, charters and other district public schools give parents tons of choices, but she’d like to see the limitations of those choices removed.

An LAUSD proposal would get rid of attendance boundaries

January 10, 2012 |  7:52 am :: Let's hear it for the wonderful people who run the Los Angeles Unified School District. They haven't exactly elicited great confidence in the past, and now there's a proposal, to be debated on Tuesday, to erase attendance boundaries in an attempt to lure back students attending private and charter schools.

Before anyone starts thinking that this would be a great way to elude athletic rules, understand that all transfers would continue to be subject to CIF transfer rules, according to Barbara Fiege, the City Section commissioner of athletics.

Of course, that could change too.

It will be interesting to see what really comes out of the proposal and which schools and coaches can figure out how to take advantage if it is implemented. Remember, the passage of the state's open-enrollment law in the 1990s made a huge impact that's still being felt today in athletics -- and that wasn't supposed to be about athletics.

Is getting rid of attendance boundaries going to do that? No

My list recommendations is at at HopeChangeChoices.org LAUSD can and should do better.