INGLEWOOD UNIFIED: ONLY SOUTHLAND DISTRICT ON VERGE OF STATE TAKEOVER + smf's 2¢ …and more 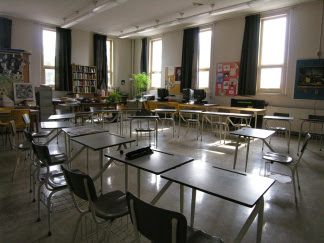 13 Jan 2012 | 6:00 a.m. :: The 12,000-student Inglewood Unified School District is on an unenviable list. It’s the only Southern California public school system district that expects to go bankrupt. In recent years its school board has tried to cut costs and avert a state takeover. County and state officials say the district could run out of money to pay about 1,000 employees. That dominated the conversation at the most recent school board meeting Wednesday.

Half a dozen people sat in the audience. The board left the room for a closed-session meeting; when it returned, Superintendent Gary McHenry introduced item 10.

"We will have reflections/inspiration and the pledge of allegiance by Ms. Trina Williams," McHenry said.

Williams didn’t waste time talking about the storm clouds brewing over Inglewood Unified. She asked everyone present to pray for a miracle that could keep the district fiscally solvent.

She then walked to the middle of the carpeted, horseshoe-shaped desks, knelt and placed her hands on the floor in a gesture rarely seen at public school board meetings.

The pledge of allegiance followed. After that, Superintendent McHenry listed the hard facts that began to spell bankruptcy.

By May, the district will have a deficit of $4.1 million in cash, and by June, that deficit will balloon to $18 million, McHenry said. "Unless we get a loan or additional expenses, we will not be able to make payroll for these two months."

The superintendent proposed several solutions: Cut $7 million from campus and department budgets to qualify for a short-term loan, begin a campaign to regenerate student enrollment and lobby Sacramento to hand over millions of dollars lawmakers have deferred until next fiscal year.

Board member Alena Giardina said that everyone within Inglewood Unified’s boundaries would have to help.

State law doesn’t allow school districts to go bankrupt. Sacramento would issue a loan and eliminate local control by appointing an administrator to monitor the district.


"The teachers are excellent," Bautista said. "Morningside, Payne, Olive Street, they’re all great schools with great teachers and they want their kids to learn."

Bautista said publicizing that good news could help stem the exodus of Inglewood students to nearby schools in Culver City and Santa Monica, as well as charter campuses. The district’s lost thousands of students in recent years, along with the money that the state attaches to their attendance.

School board member Giardina said one reason Inglewood Unified’s in such a mess is that the board didn’t cut teachers as enrollment dropped. The district’s laid off 150 teachers in the last couple of years.

Teachers' union president Peter Somberg said his teachers want the state to intervene and stop the board from what he called wasteful spending.

"It won't be good for the district," Somberg said, "but at least we won’t be hiring outside consultants any more. There will be a single person put in place by the state board, by the state Superintendent Tom Torlakson, who will be accountable. Right now these guys, these men and women are only accountable when they’re up for election."

The Inglewood Unified school board did not vote to move forward on the superintendent’s cost cutting plan. That’s likely to happen at the Jan. 25 meeting.

Jan. 12, 2012 | The Inglewood Unified School Board met Wednesday night for its first meeting of the year. While many California public schools are facing state budget cuts, this 12,000-student district is bracing itself for especially tough decisions as it expects to run out of money in the next few months.

The school board agenda included the results of an independent audit for the last fiscal year. The news was less than promising.

According to the audit, Inglewood Unified's finances "raise substantial doubt about its ability to continue as a going concern." Many educators and board members worry this means bankruptcy is likely.

If the district isn't able to reverse its financial slide, the state would likely strip the school board of its powers and take control.

An $18 million deficit is expected to slam the district by the end of fiscal year 2011-2012. The superintendent has recommended taking out loans, freezing expenses and laying off employees.

Inglewood schools have already dismissed 223 workers, mostly teachers, to cut the deficit. The president of the teachers' union said a declaration of bankruptcy and a state takeover would stem the flow of red ink.

But the audit said negative cash flow and a general fund below recommended levels are two of the deficit's primary causes.

It's gotten bad: Budget issues literally push one school official to her hands and knees

Jan. 12, 2012 | Before the pledge, she got down on her hands and knees in front of the horseshoe and began a prayer to God — asking for forgiveness and asking for all in the room to repent for their sins.

The night apparently didn't get any less dramatic, as the board discussed the likelihood that it would run out of money in the next few months and be forced to declare bankruptcy. That would likely mean the state would strip the school board of its powers and take over the operations of the 12,000-student district.

"The district expects an $18 million deficit by the end of this fiscal year. The superintendent recommended taking out loans, freezing expenses and laying off employees. Inglewood schools have already dismissed 223 workers, mostly teachers, to cut the deficit. The teachers’ union president said a declaration of bankruptcy and a state takeover would stem the flow of red ink."

Such budget issues have hit many districts hard, especially after Gov. Jerry Brown unveiled his proposed 2012 budget that includes the possibility that K-12 education and community colleges could be hit with a $4.8 billion cut if tax increases he is trying to get on the November ballot aren't approved by voters.

LAUSD Supt. John Deasy told school board members Tuesday the district is facing a $543 million shortfall next year and will need to consider putting a parcel tax before voters in November to try and avoid more devastating cuts to the nation's second-largest school system. He said this could include possibly laying off thousands of employees, slashing entire school programs and losing months of school.

KPCC reporters would like to hear from Inglewood residents, parents, and school district teachers and other workers about the problems the IUSD is having.

Here's the link to see our questions and respond confidentially: http://www.scpr.org/network/questions/inglewoodschools/

Thanks in advance for sharing your insights.