LIBRARIANS RARER SIGHT IN CALIFORNIA SCHOOLS: California schools have fewer librarians per student than any other public school system in the country. 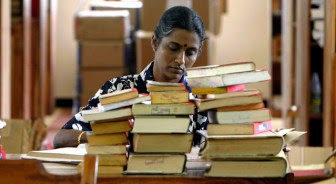 Getty Images | There are fewer and fewer school librarians in California.

Fewer than 25 percent of Caliornia public schools are staffed with a school librarian, according to SFGate.

That makes about 900 school librarians across the state, according to Department of Education statistics -- or the lowest ratio of librarians-to-students in the country.

With budgets sliced and diced to balance big statewide deficits in Sacramento, school librarians are often the first to go, according to the report. Schools will try to share librarians between three campuses, or ask parent volunteers to fill in to tell students where the books are kept.

But since students rely more on technology and computers in classrooms, some educators and executives question the need for librarians, many of whom don't spend time teaching children how to read or advising what books to take up next. They do teach copyright information and how to do research, however -- and schools with on-site librarians also record higher test scores, according to studies.

Fewer books are also being checked out in schools that applied for grants for the federal government -- and as for research techniques, does anyone really need a full-time staffer to tell them how to use Google?

●● smf : The argument that schools with on-site librarians also record higher test scores is research based and data driven; The argument: Does anyone really need a full-time staffer to tell them how to use Google is

2. Google propaganda – especially as it is made by Ze'ev Wurman, a Silicon Valley software developer in the field of programmable logic - cited on Google as 1.globally recognized as an educational standards expert and 2. co-creator of “California’s mile-wide and inch-deep content standards”.

3. Presumes that Google is the sine qua non of research methodology, logically programmed or not.

The question I responded to in that piece on SFGate was more nuanced than you present it. I said that for elementary grades, when the choice is between cutting a classroom teacher or a librarian, I don't think librarians come ahead.

You are welcome to disagree, but please at least try to be half-intelligent about it. The question was never whether librarians contribute to student achievement, but rather how does librarians' contribution compare with teachers' contribution. If you happen to know any research that sheds light on this question, I'd be happy to hear about it.

Finally, I am not sure what is "google propaganda." I can say, however, that both your google search, as well as your standards-related, skills are rather limited. Only ignoramuses would call California standards mile-wide and inch-deep -- even today they are rated by experts as the best in the nation and above the Common Core ones. Further, drawing attention to the fact that in my professional life I am an engineer is no different that drawing attention to the fact that all you seem to have is a political science degree from a third rate community college. Neither is relevant to the discussion at hand.

There's not a lot of nuance once the words "half-intelligent" and "ignoramus" get bandied about.

You comparison of librarians to classroom teachers smells like the attempted rightsizing/culling-of-the herd/interrogations attempted last year in LAUSD, well documented by Hector Tobar in the LA Times http://lat.ms/ol6uJR. In that process of legal hearings school librarians were confirmed to be teachers.

There is no more important classroom in the school than the library. It is here that kids learn to learn+think independently - and also to read and learn for the pure enjoyment of learning and reading - and the elementary grades are the exact right place to begin. School librarians teach/encourage these skills and also the rules of research - and help and prod and direct young minds.

A school library without a librarian is a book room.

Perhaps you are right and I should have used more tempered words. But the difference between our nuances, so to speak, is that you refer to the form while I referred to the content.

As to your opinion of the relative importance of elementary full-time librarians (as opposed to libraries with part-time librarians or volunteer staffing), that indeed is the essence of the question at hand. Your opinion is reasonable, as is mine. But I am unaware of any research that addresses this question, so the resolution is left to our system of beliefs. We should all recognize that.