“The line it is drawn, the curse it is cast…”: BROAD FOUNDATION PLANS MAJOR CHARTER SCHOOL EXPANSION FOR L.A. UNIFIED STUDENTS 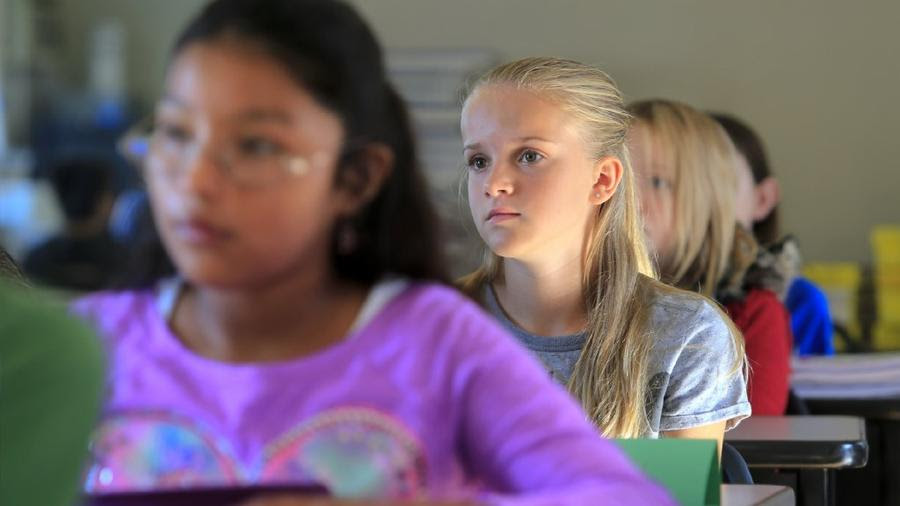 Students sit at their desks on opening day of the new Westchester Secondary Charter in September 2013. (Los Angeles Times)

8 Aug 2015  ::  A prominent local education foundation is discussing a major expansion of charter schools in Los Angeles aimed at boosting academic achievement for students at the lowest performing campuses.

Details of the project are not yet fully clear. But charter school leaders said they have met with officials from the Eli and Edythe Broad Foundation in recent months about the effort. The Keck Foundation, the Walton Family Foundation and other organizations that support the independently run, publicly financed charters also are involved, according to people who attended the meetings. They requested anonymity because they were not authorized to speak on the matter.

The Broad Foundation said the charter plan is in an early, exploratory phase, but declined to provide specific information.

"People have been demanding better public schools forever and not getting them," said Swati Pandey, a spokeswoman for the foundation. "We hope this will be a bigger, better and more ambitious effort to make that happen."

The people who attended the meetings said organizers displayed maps showing Los Angeles neighborhoods where they said thousands of students are going to under-performing public schools.

An ambitious expansion of charter schools would be costly and would likely face a political fight. And it's not known what kind of funding commitments the organizers have locked down.

One person who attended a meeting said the goal was to enroll in charter schools half of all Los Angeles students over the next eight years. Another said there was discussion of an option that involved enrolling 50% of students currently at schools with low test scores. A source said the cost was estimated to be $450 million; another said hundreds of millions of dollars are needed.

Officials from Keck and Walton could not be reached for comment.

Currently, more than 100,000 L.A. students attend charters, about 16% of district enrollment, according to the Los Angeles Unified School District. L.A. Unified has more charters, 207, and more charter students than any other school district in the country.

"We looked at maps of L.A. and how many students are attending these schools and talked about what can we do about it," he said. "They tried to identify areas of L.A. where tens of thousands of students are going to schools that they deemed unsatisfactory."

"It's exciting," said Cristina de Jesus, president and chief executive of Green Dot Public Schools California, which operates 20 charters in the L.A. area. "It's re-energizing the conversation around education and education choices in Los Angeles."

Charters are exempt from many rules that govern traditional schools; most are non-union.

United Teachers Los Angeles has long been at odds with Eli Broad. Union President Alex Caputo-Pearl accused the philanthropist of repeatedly trying to weaken the "input of teachers over how education is run in their schools."

"We're concerned about anything Eli Broad is involved with," he said.

School board President Steve Zimmer said that while some charters serve students well, a rapid expansion could undermine the district's own school improvement efforts. L.A. Unified enrolls students who are more difficult and expensive to educate than those at charters, he said. Those students would be left with fewer resources if there were an exodus to charters, Zimmer said.

"The most critical concern would be the collateral damage to the children left behind," he said.

The most critical concern would be the collateral damage to the children left behind. - Steve Zimmer, Board of Education

Funding for the proposed effort could go toward obtaining classroom space and for covering the early administrative costs of new charters. It also could be used for training teachers and administrators. Discussions are underway with Teach for America to provide instructors, according to those familiar with the planning.

Charters became a central issue in this year's school board elections; supporters, through a political action committee, spent more campaign dollars than any other interest group.

The election resulted in charters gaining an ally on the school board: Ref Rodriguez, a charter school co-founder. He could not be reached Friday for comment.

While charters benefit from philanthropic and bipartisan political support, they also have many critics, including teachers union leaders. In L.A., charters have clashed with district officials over access to classrooms and resources.

Charter proponents considered it a setback when former Supt. John Deasy resigned under pressure in October. Deasy now works for the Broad Foundation as "superintendent in residence" to help train and coach current or aspiring senior school district administrators.

Broad had said Deasy was the best L.A. superintendent in memory. Deasy's departure may have been a catalyst for Broad to pursue an aggressive strategy outside the school system, some observers said.

"John Deasy was not able to move the needle enough on changing the bureaucratic culture at LAUSD," said Shane Martin, dean of the School of Education at Loyola Marymount University. Given his departure, it's "not a surprise" that critics of that bureaucracy "are drawn to a charter effort."

The foundation declined to discuss what role, if any, Deasy is playing in the new effort.

smf: see 4LAKids - some of  the news that doesn't fit: By the numbers: HOW TO TELL IF YOUR SCHOOL DISTRICT IS INFECTED BY THE BROAD VIRUS |  http://bit.ly/ByTheNos