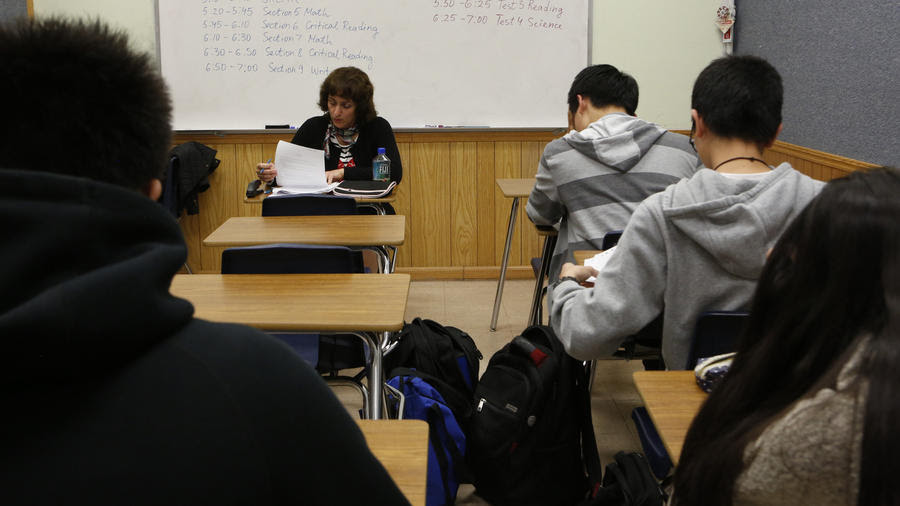 26 Aug 2015  ::  A performance gap on the ACT college entrance exam persisted this year between California's Latino and white high school students, according to new test results.

Educators and experts find this trend particularly concerning. They had hoped for better results from the relatively small segment of test takers who are largely a self-selected group of students who are motivated to get to college.

Across the country, the class of 2015 stagnated, with 40% of the 1.9 million test takers showing what the organization calls "strong readiness," according to results released Wednesday.

California students overall outperformed their peers nationally. While 28% of students across the country met all four ACT targets, intended to represent college success, 37% of California's test takers did so.

"California had some higher-performing students than the country did," said Jon Erickson, ACT's president of education. "That's a good sign."

California's test takers had an average overall score of 22.5, compared to 21 nationally. A maximum score is 36.

The gap between Latino and white students has remained since at least 2011.

The ethnic breakdown of test takers is not precisely the same as the state's: nearly 28% of test takers were white, and about 38% were Latino. According to census data, California's population between the ages of 18 and 24 is 31% white and 47% Latino. 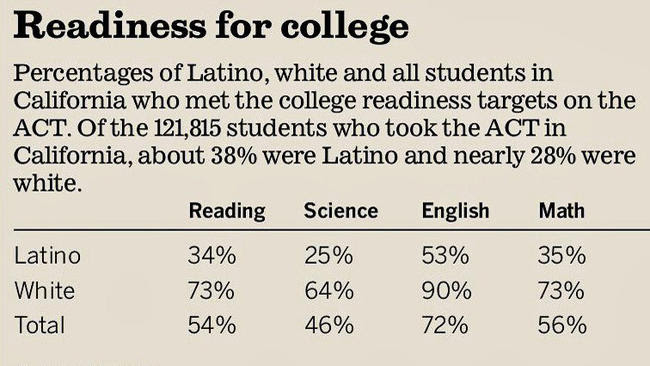 In all four subject areas, English, reading, math and science, the difference between the percentage of white and Latino students meeting ACT benchmarks ranged from 37 to 39 percentage points.

In California, about twice as many students take the SAT college entrance exam as the ACT, which is typically more popular in the Midwest. Many universities require students to take either the ACT or the SAT as part of the admissions process.

Poverty can have a profound effect on education — but income inequality by itself does not explain educational disparities, according to Ryan Smith, the executive director of Education Trust-West.

"Race does play a factor in student achievement. It's not just an issue of class," Smith said. "It's a conversation that is lacking, particularly among education leaders."

"My national concern is that those gaps aren't closing rapidly," Erickson said. "I'd say the same thing for California. I was hoping to see those gaps narrow, and it's pretty much been stable."

With its limited scale, the ACT results are piecemeal. But they still provide a piece of the puzzle in evaluating California's schools during a drought of state testing data. For two years, the state has not released standardized test results as California eases into teaching the Common Core standards, a set of learning goals in math and English language arts that specifies what a student should know by each grade.

In California, Common Core test results will be released in September, officials say, but even those numbers will not show progress — rather, as the first set of scores, they will set a baseline for future performance.

Although test scores are a source of anxiety for parents and the public, what is often lost is that they measure probability, said Anthony Carnevale, a Georgetown University professor who researches workforce skills and a former vice president of the Educational Testing Service.

"A test score is a probability statement," he said. "The whole apparatus is an artifice designed to get kids from high school to Harvard."