Updated: JEB BUSH’S EMBRACE OF COMMON CORE IS A CAMPAIGN LIGHTNING ROD …or not 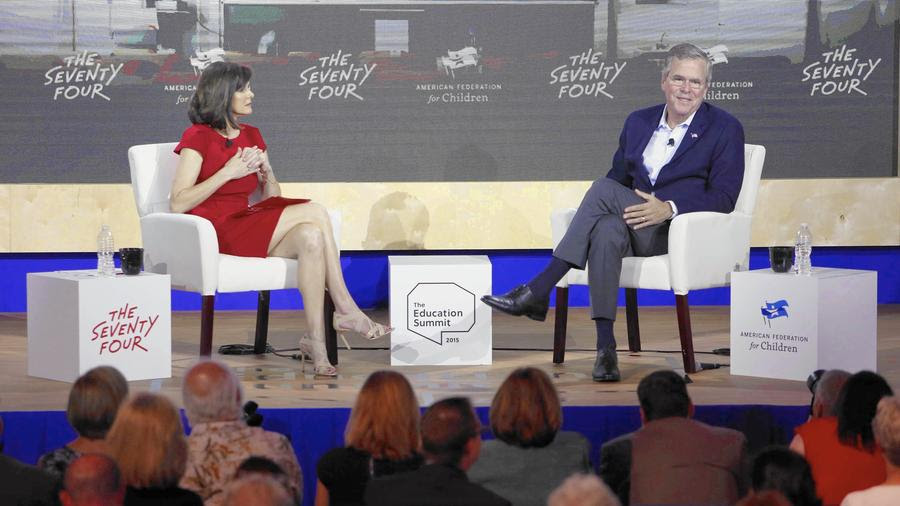 Aug 20, 2015  ::  As former Florida Gov. Jeb Bush sat for a public chat about education on Wednesday, the conversation turned, inevitably, to Common Core, and the candidate was primed with a cheeky quip.

Although the standards were developed by state and local officials as a way to measure student achievement nationally, they've evolved into a stand-in for federal overreach in education. Key parts of the GOP base have united in opposition, and Bush and other Republican leaders have found themselves up against a formidable and organized constituency.

I'm not going to change my position because there's four people in the front row yelling at me. - John Kasich, defending his support of Common Core educational standards

Bush has watched his onetime signature issue — education reform — transformed into the thorniest of topics. As his campaign struggles to win support in a crowded field, the standards have become a test of his ability to win over conservatives, or keep them from pulling him too far to the right.

His effort was on full display Wednesday, as he and five other Republican contenders sat for back-to-back interviews at an education forum hosted by the Seventy Four, a news site founded by journalist-turned-advocate Campbell Brown, and the American Federation for Children, a group that pushes for school vouchers, charter schools and similar education policies.

Several of the Republican participants had abandoned their support for Common Core and had to explain their newfound opposition. Former Hewlett-Packard chief Carly Fiorina suggested the standards evolved into something she had not imagined when she endorsed them. New Jersey Gov. Chris Christie argued that his willingness to reverse his position was a sign of leadership.

"I don't 'seem to have' backed away from it, I did! It doesn't work," said Christie, winning applause. "All the polling in New Jersey was against it. After a while, the other part of leadership is to listen. So I've listened."

Bush staked out a middle ground — backing statewide benchmarks but not federal involvement — and suggested the differences were inconsequential.

"The debate needs to be broader. It needs to be about real accountability, school choice, high standards," Bush told Brown. "If people don't like Common Core, fine. Just make sure your standards are much higher than the ones you had before. We can't keep dumbing down standards."

The answer was a version of one he has given repeatedly to voters who ask persistently at events. At the recent GOP debate, the moderators singled him out to explain his support.

He said he supported state standards but opposed federal involvement and said flatly that he did not think opponents of Common Core were "a fringe group." He was applauded, and Bush's advisors argued that his response was one of his strongest of the night.

But it did not end the questions. On the stump last week at the Iowa State Fair, Bush fielded another one by arguing that "the term 'Common Core' is so darn poisonous, I don't even know what it means."

As political analysis, Bush isn't wrong. Polling shows support for Common Core standards has eroded steadily in recent years, from 65% of the public in 2013 to 49% in a poll conducted in the spring for the academic journal Education Next. Just 37% of Republicans said they supported the standards, the survey found.

Common Core supporters have repeatedly argued that the heated rhetoric on the right has obscured the facts of the debate, particularly that the achievement measures were developed by a bipartisan group of governors and experts and aren't mandated by the federal government.

The Obama administration's Race to the Top program, a competition among states for federal education funding, rewarded states for adopting some common standards and accepted the Common Core. That essentially "forced" states to adopt them or suffer economic consequences, opponents argue.

Bush has so far chosen not to fight over the details, an approach that contrasted sharply with Ohio Gov. John Kasich on Wednesday. Kasich, also a supporter of the standards, went after his opponents for flip-flopping.

"I'm not going to change my position because there's four people in the front row yelling at me," Kasich said, adding that he based his view on data. "I'm looking through all the facts and not getting all the information from the Internet."

On Wednesday, Bush and Kasich both received F grades for their positions from the conservative think tank American Principles in Action.

The group wrote that Bush "has propagated the false narrative that the Common Core standards are merely learning goals and are of high quality."

The other two candidates at the forum, Wisconsin Gov. Scott Walker and Louisiana Gov. Bobby Jindal, also oppose the standards after once supporting them.

While Bush has defended his position on the standards, he has taken a hard line on other education issues that might come to haunt him if he wins the Republican nomination. On Wednesday, he said he could not see himself working with Randi Weingarten, the head of the American Federation of Teachers, which has endorsed Democrat Hillary Rodham Clinton for president.

"I'd love a day when Randi Weingarten and I could hold hands and sing 'Kumbaya,'" Bush said. "Her job is to represent the economic interests of the adults" in the system.

And he appeared to endorse a new Nevada school voucher law praised by advocates as perhaps the most sweeping voucher system in the country.

"Why not allow total voucherization? Nevada is moving in this direction," Bush said. "Let the suppliers come up with the creative solutions, have high expectations and accountability, and get out of the way."

Democrats pounced on the phrase "total voucherization" as evidence of Bush's "extreme" views.

"This would drain federal resources from our public education system and from programs that support vulnerable, low-income children," said Democratic National Committee spokeswoman Christina Freundlich. "He wants our education system to look like an episode of 'Extreme Couponing.'"