Back2School@LAUSD:/Day 2: A SMOOTH START …AND NOW THE HARD WORK BEGINS

Some critics consider the mammoth school system so hopeless that they are trying to dismantle it. Others say it's too late.

For the opening of school Tuesday, L.A. Unified presented itself as thriving, reviving and vital. In events stretched throughout the day, officials showcased some of its best.

El Sereno Middle School offers classes in Mandarin for its mostly Latino students and hosts a program with USC to pay tuition for those who graduate from high school.

"He speaks three languages," Irma Henriquez said proudly of her son, Nelson, 13. "Imagine how many doors will open to him in the future."

At Vine Street Elementary in Hollywood, parents got the chance to question school board President Steve Zimmer and even complain about a few things.

Liliana Rodriguez said he needs to do something about the cafeteria lunches. 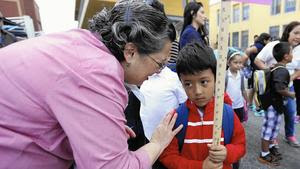 "My kids don't like to eat at school very often because the foods are frozen," Rodriguez said.

New Principal Kurt Lowry was determined to be responsive. He put in a call to food services about the frozen or undercooked meals. And he made a radio call to custodians when he was alerted that there was no soap in the preschoolers' bathroom.

The district even took the media into its command center for the online student records system that failed last year, leaving schools in chaos with students unable to get into classes.

That program, called My Integrated Student Information System, or MISIS, appeared to work Tuesday. Fixing it cost $133 million. An additional $80 million was set aside for this year.

"The district is in a renaissance," said L.A. schools Supt. Ramon C. Cortines, who took over the top job last fall. "A year ago, the opening of school was a disaster. And I believed it could be fixed.... It's my hope that [parents] are willing to say: 'Hey, maybe we can trust the district again.' "

The new year finds the 650,000-student L.A. Unified School District at a crossroads. Increased funding has restored staff and programs that were lost during the recession; long-awaited salary increases have improved labor relations and polarizing Supt. John Deasy resigned under pressure.

Cortines, 83, returned from retirement with a pragmatic focus: fixing the records system and charting a path forward on technology after a disastrous, now-abandoned effort to provide iPads to every student, teacher and campus administrator.

But higher state funding isn't keeping up with claims on it. Many adult school teachers were laid off and some question whether the district can afford the pay raises.

At Jefferson High School south of downtown Tuesday, the big story was the absence of a big story.

Justin Fernandez, a junior, said the focus on Jefferson has benefited the school.

"They've put kids in the right places," he said. "I haven't seen no one with mistakes in their schedule. And the school is getting lots of attention."

Principal Jack Foote had been prepared for the worst, with printouts of rosters and attendance sheets if, for example, the city of Los Angeles suffered a major power outage.

There were minor glitches. Eleventh-grader Miguel Figueroa said he need a more advanced Spanish class than the one he received. Another student said he wanted ROTC as an elective but it wasn't on his schedule.

3Overall, the system functioned as it should. "It's no longer that it doesn't work or 'I wish I could take attendance,' or, 'I wish I knew how many students I had in my class,'" said history teacher Katherine Harrison.

The district highlighted Cleveland High School in the west San Fernando Valley, where the humanities magnet sends students to some of the best colleges in the country.

At 186th Street Elementary in Gardena, teaching veteran Lisa Harmison oversaw organized chaos. The pre-kindergarten class of 24 was split into groups, each assigned a color, and rotated between stations.

At one, children used blocks in free play, sitting on a mat with the alphabet on it, learning to play together to build social skills. In a second, students worked independently, gluing together pre-cut pieces of paper to make an owl, the school mascot. The goal was to learn how to follow directions.

At a third table, pupils matched colored pieces to the shapes on paper, a math-related exercise.

"Patterning in preschool is big," said Dean Tagawa, a senior administrator. It lays the foundation for math concepts later on, he said.

Some of the 4- and 5-year olds were in a classroom setting for the first time, and it showed — Harmison constantly directed them back into their groups. She pulled one out of the play kitchen, built out of wood, sending him to the library area.

One of her biggest concerns in the so-called transitional kindergarten is the length of the day: there isn't time for napping.

L.A. Unified's public relations efforts aren't likely to sway some civic leaders and philanthropists who have lost faith in the system. A group led by the Eli and Edythe Broad Foundation* is seeking to rapidly expand the number of independently operated charter schools, which could shrink a school system already dealing with declining enrollment.

Jefferson history teacher Susan Ferguson said it would be wrong to give up on schools such as hers and the students who depend on it.

Even though the scheduling problems led to student protests, she said, "the kids wanted to come back here. They wanted their classes. They want an education. They want the best for themselves and they deserve it."

What parents want L.A.'s school board to work on: students' lunch