Back@School @CA: THE CAHSEE DEBACLE (2 stories) “By the power vested in me, and a waiver from the legislature, I hereby award you….”

By The Times Editorial Board | LA Times | http://lat.ms/1KvOfFx 19 Aug 2015  ::  State schools chief Tom Torlakson is bemoaning an unfair situation that threatens the diplomas of thousands of students. He's pledged to do something about it. What the superintendent of public instruction hasn't done is acknowledge his own culpability in creating it in the first place.

At risk are 5,000 students who recently finished their senior years but who have not yet passed the high school exit exam, which is intended to ensure that students don't get diplomas unless they have mastered the rudiments of English and math. Torlakson canceled this summer's test. As a result, these students cannot apply for jobs requiring a diploma; others, who have already been admitted to college, could see those admissions threatened.

SB 172 would solve the short-term problem by retroactively excusing the class of 2015 from the test. But it's a bad bill that threatens the entire future of the exam.

The current exit exam has to go because it's out of step with the new curriculum based on Common Core, Torlakson explains. But whose fault is that? It's not as though everyone didn't know years ago that Common Core was coming. Why wasn't the exit exam updated in tandem with this curriculum change?

The bill calls for a three-year hiatus from the test while a panel studies its future. Not only is that unnecessarily long, but the bill makes no commitments about what happens after that. Under the bill, there might be no requirement at all that high school graduates show mastery of basic skills, which would practically ensure a return to the days of social promotion and meaningless diplomas.

It's not as though everyone didn't know years ago that Common Core was coming. Why wasn't the exit exam updated in tandem with this curriculum change? -

Torlakson's decision to cancel this summer's testing (the test is first given in sophomore year, but those who fail are given many additional chances) puts significant pressure on the Legislature to pass SB 172 swiftly in order to protect the 5,000 students. Was this politically motivated or simple ineptitude? Neither is acceptable.

Rather than rushing to pass SB 172, legislators are wisely amending another education bill, to be considered Thursday, to award these students their diplomas without the exit exam. It's a less-than-perfect solution — three-fourths of summer test-takers typically flunk the test, which means schools will be awarding diplomas to students who lack the requisite skills. But it's probably the only acceptable step right now; this situation isn't the students' fault. Then the Legislature should swiftly kill SB 172 and instead propose a more sensible plan, requiring an updated exit exam that doesn't take years to develop.

Cal State freshmen can still start school this fall, despite the July exit exam being cancelled 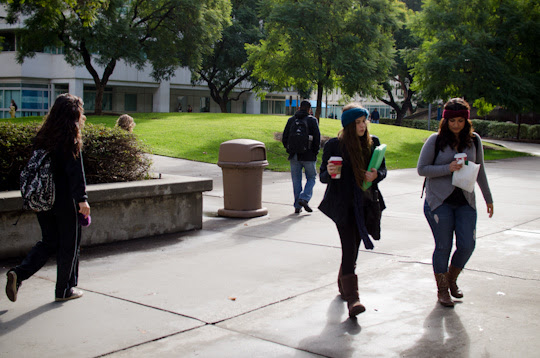 In file photo, Cal State Fullerton students walk on campus. The CSU says they still welcome graduating 2015 high school students to their campus if they were admitted despite not taking exit exam. Anibal Ortiz

18 August 2015  ::  High school seniors who were provisionally admitted to one of the 23 California State University campuses but missed their last chance to take the California High School Exit Examination (CAHSEE) can breathe a sigh of relief. CSU officials say they can still start classes this fall even if they didn't complete the CAHSEE.

The test is an exit exam meant to determine whether a student graduates with appropriate grade-level skills in various subjects.  The July test date was cancelled and was the last opportunity for graduating 2015 seniors to take the test.  The CAHSEE is a requirement to earn a high school diploma in California, so many graduating students who could not take the test were left to face the possibility of not graduating and thus not starting college in the fall.

Since Cal States don't actually require the CAHSEE to be admitted, there shouldn't be a problem for students, said Toni Molle, director of public affairs for Cal State University's Chancellor's Office. CSU will still let admitted seniors start the semester on time. Molle said potential CSU students only need a graduation date on their final high school transcripts, which means students' admission will not be affected as long as they have proof that that they finished high school and meet all other CSU requirements.

"Our vice chancellor of academic affairs put out the word and wanted to assure students, as well as our admissions people, that we're going to be flexible if the only missing requirement is that they don't have that date," Molle said.

"Our staff is going to be working with high schools with the students who didn't get those dates and their families to make sure they are going to be able to start the academic year on schedule," Molle said.