By The Los Angeles Times Editorial Board | http://lat.ms/1JIjt0f 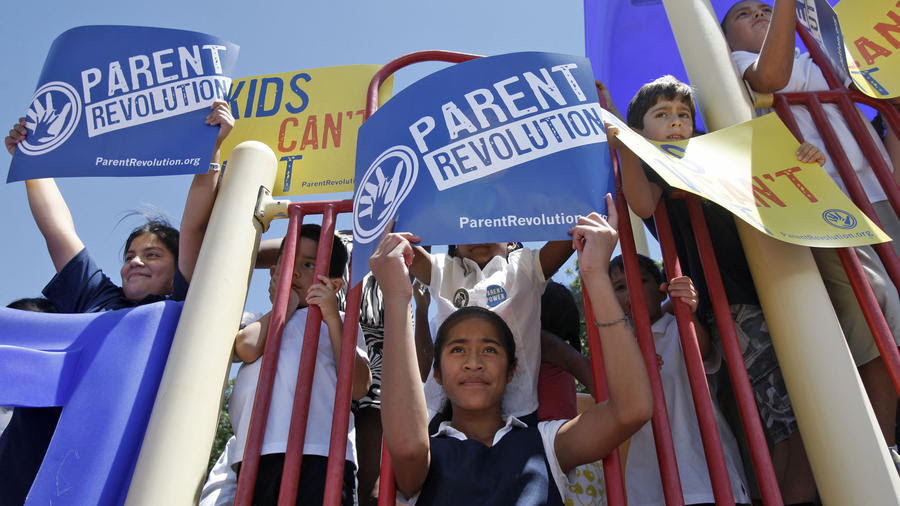 Aug 3, 2015  5AM  ::  Five years after California's parent-trigger law was passed, it has not had the dramatic effect on public schools that its proponents hoped it would. Yet it is already at a crossroads in its young life.

The law, passed in haste in 2010 in an effort to empower parents at lower-performing schools, lets them force dramatic change if half or more of them sign a petition. They might demand the replacement of some or most of the staff or vote to turn their school over to a charter operator. They might even close the school altogether. Under the law, the parent trigger is an option only at schools whose scores on the state Academic Performance Index fell below the proficiency mark of 800 and that failed to meet their federal improvement requirements, called Adequate Yearly Progress, for several years in a row. The law limited the trigger option to 75 schools on a first-come-first-served basis to see how it played out; at the time, officials expected the number to be quickly met and expanded.

But that hasn't happened. There have been only four schools in which parents filed petitions that succeeded in forcing a change. Parents at five more schools used the petition process as leverage to negotiate changes, a much less disruptive process, without ever filing an actual petition.

It is hard to know whether these changes have resulted in improved academic performance because the state has for the moment stopped reporting test scores during the switch to new standardized exams. Yet it's encouraging to see that parents have some clout, especially low-income parents who felt their children were stuck at problematic schools. That was the original idea: to give deeply frustrated families a chance to take action when educators ignored them.

That's why this page supported a limited rollout of the parent trigger, despite concerns about the sloppily written law on which it was based — and why we continue to support it in principle despite misgivings both conceptual and pragmatic.

The trigger law raises questions as basic as: Who owns the schools? Do they belong to the parents whose children attend them or to the district voters and taxpayers who fund them and elect the school board? If taxpayers and voters are adamantly opposed to a change that parents support, who ought to get their way? Should a bare majority of parents — not all of whom are citizens, by the way — have enough power to close a taxpayer-funded school, forcing the minority of parents to send their children farther from home? This option has never been exercised, but it remains a possibility.

There are also concerns about whether petition drives are being held in an open, transparent manner, so that all parents have the information they need to participate, and whether the law allows too many fairly good and improving schools to be targeted.

The law remains the subject of dispute. In July, a judge ruled in favor of parents at Palm Lane Elementary School in Anaheim who were trying to use it. The Anaheim City School District had fought back, claiming that because California has suspended the reporting of its tests to the federal government, and isn't publishing its API scores, there were no grounds under the law for a trigger petition. The judge was right. Parents should be able to use the most recent data available for petitions.

But there are permanent changes afoot that could require a rewrite of the law. Not only will the API soon be replaced by something that looks far different, but, at the same time, legislation to reauthorize the federal No Child Left Behind Act would, as currently worded, do away with the federal AYP measurement completely. The parent trigger law is specifically tied to those two measurements.

A new trigger law should create stricter guidelines to target truly low-performing schools, and should prohibit school closures through petition. Trigger petitions must be made public, with all parents informed, and the larger community given a chance to be involved. When a petition prevails and parents are considering proposals for changing management of the school, all parents should have a voice and a vote in the decision, not just those who signed the petition.

The parent trigger remains an intriguing if so-far-unproven idea, but the time has come to start imagining a more thoughtful version.

●●smf's 2¢: “That’s why this page supported supported  a limited rollout….”  Not quite a mea culpa “…and why we continue to support it…”  not quite an apology - for one of the worst pieces of legislation dealing with alleged school reform ever written.

But in the next few days The Times will publish a Letter to the Editor – or perhaps an Op-Ed  – from former Senator Gloria Romero and/or former Parent Revolutionary-in-Chief Ben Austin crying foul!  The Parent Trigger Law was like the old Letters of Marque issued by the crown to allow adventurers to act like pirates and raid merchant shipping  with royal permission.

“Arrrgh! We are not pirates, we a Privateers, Matey!”

None of this is fair and now he mean old Times and the courts and the legislature  and the Anaheim Board of Education are ganging up on poor Gloria and Ben and P-Rev.  They are only playing the rules of the game they way they made them up when they were in office …and how dare anyone try to change them!