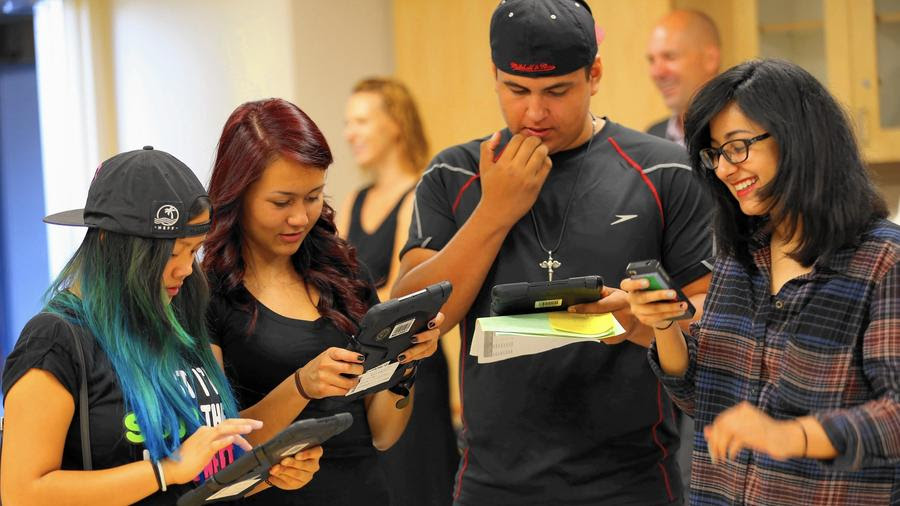 18 Aug 2015  :: Getting students into the right classroom on the first day of school is a modest goal.

But it's a huge improvement over last year, when thousands of students in the Los Angeles Unified School District were left without class assignments and teachers couldn't even take roll.

Officials this week are trying to right two major technology debacles: a malfunctioning records system and a now-abandoned plan to provide iPads to all students.

Last year, the records system caused chaos at campuses around the district. The iPad project led to an ongoing FBI investigation. And both contributed to the departure of the superintendent and other top administrators.

As schools opened Tuesday, officials are hopeful that they've turned the corner on their technology fiascoes.

A recent spot check of district schools found about 3% of students still needed to be assigned classes. At Jefferson High School, south of downtown, only one student, a new arrival to the campus, was lacking a schedule.

This time last year, Jefferson couldn't determine how many students it had, and few, if any, had correct class assignments — let alone accurate transcripts or grade-point averages needed for college applications.

Although Jefferson may have been most affected, the system failed districtwide. It couldn't handle the volume of data or the complexity of tasks.

"We feel good that students are in the right classes," said Jefferson Principal Jack Foote. "We had kids pick up their schedules last week."

The student records system had seemed like a bargain at first — it was based on free computer code, obtained from Fresno Unified, which could be modified as needed. It was intended to unite all student records in one place, including attendance, course schedules, emergency contacts, past performance and special needs. Such coordination, officials hoped, would lead to faster and more appropriate services for students and more efficient business practices.

The new program, called My Integrated Student Information System (MISIS), cost $133 million to get on track. Officials set aside $80 million this year to pay for additional fixes.

Veteran school system lawyer Diane H. Pappas was placed in charge of salvaging the records system. She assembled consultants, district technicians, volunteers from the private sector and staffers from schools.

A software company might update a program two or three times a year, Pappas said, whereas the district has had to push through 100 fixes some weeks.

"We've been rebuilding on what was here," Pappas said. "MISIS was in a complete state of disarray."

We feel good that students are in the right classes. We had kids pick up their schedules last week. - Jack Foote, principal at Jefferson High School

"Last year, the district couldn't generate a report about how many students lacked schedules and the data wasn't accurate," Pappas said.

L.A. schools Supt. Ramon C. Cortines spent an hour on the phone last week with administrators going over the situation at every school with potential problems. Cortines vowed to empty the central office, if needed, to provide help to campuses on opening day, Pappas said.

A reliable records system "is the heart of the district," said Cortines, who returned from retirement to head the school system last October after then-Supt. John Deasy resigned under pressure. Soon after, the head of technology also resigned.

"After months of tireless repairs, our heart has some new stents, replaced valves, a pacemaker and reduced cholesterol, and it is pumping much stronger," he said recently, extending a metaphor that he has employed on several occasions.

Shortly after Cortines' return, the FBI seized records related to the bidding process that resulted in the iPad contract. Current and former district officials have denied any wrongdoing.

By then, the iPad effort had expanded to include other devices but also had ground nearly to a halt.

Cortines decided that L.A. Unified could not afford the $1.3 billion start-up cost of providing computers to all students, teachers and campus administrators.

Still, every student will receive a computer this year at 103 previously approved schools, about a 10th of district campuses.

At one of them, Valley Academy of Arts and Sciences in Granada Hills, students received their iPads last week when they turned in forms and picked up textbooks.

Tenth-grader Scott Murray enrolled at the school after leaving another with a program for highly gifted students — because he wanted the iPad.

Scott is dyslexic and has trouble writing homework assignments. He takes a photograph of the blackboard instead. And he dictates the first drafts of essays and writing assignments into his iPad.

"Writing is the problem," he said, "not thinking."

"Until he got this single device, he wasn't a full, equal member of the class," said his mother, Gail Murray.

Campus-wide Wi-Fi allows students to do research online. Students receive assignments on their devices and use them to turn in written work and other homework. Some textbooks and novels can be downloaded to the devices. Students also avoid bringing home textbooks by photographing pages with math problems, for example.

Art teacher Jess Perry-Martin has students take photos of their art projects, which she can then take home to evaluate.

Valley Academy first tested iPads in 2012, the year before the district adopted its iPad plan.

The school's experience with the tablets reflected the district's inconsistent, incomplete policies.

Eventually, officials decided that schools need to demonstrate that they can make good use of the devices. Valley Academy was the first to get such a plan approved. As of last week, it was the only school with an approved plan, but other campuses are not far behind, said Bill Wherritt, a deputy director in the facilities division.

He added that all classrooms throughout the district now have WiFi, and every school has enough shared computers for students to take new state standardized tests online.

At Jefferson, the ratio is about one computer to every four students. Most of the new devices are Chromebooks, a less expensive alternative to the iPad. Foote said his staff would benefit from additional training in computer-based instruction.

A task force will meet in the coming months to develop a long-term technology plan for L.A. Unified.