WHAT’S NEW AT THE PTA, DAD? -Men Shift the Dynamics of a Changing Organization 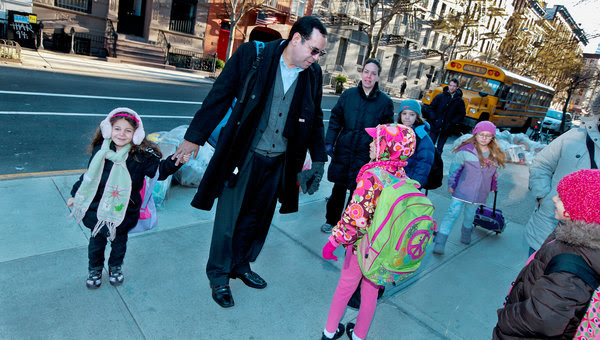 February 17, 2012  ::  AT Public School 11 in the Chelsea neighborhood of Manhattan, the senior president of the Parent Teacher Association is a vivacious chatterbox who ascended the school’s executive board the way many do: forging bonds with parents and teachers, doing an impressive stint as treasurer and finally being drafted for the top slot by a growing fan base. 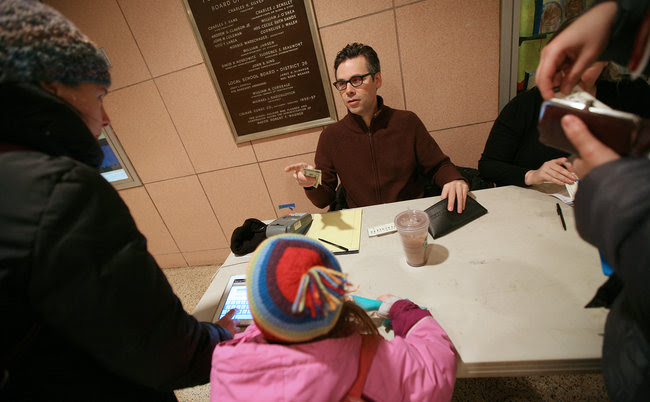 The one thing this executive officer did not do is man the cupcake table.

“I’m not into the baking,” said Juan Brea, an admission that once would have been unheard-of in the PTA.

Mr. Brea, a 43-year-old who favors football, blue blazers, Polo cologne and chopping wood in his Catskills backyard on weekends, is part of the changing face of the PTA. What was once an easygoing volunteer group made up mostly of stay-at-home moms has begun to give way to male leadership.

“This is like running a small business,” said Mr. Brea, whose day job is chief operating officer at a small nonprofit. “I’m an operations guy. I believe I add value.”

A 2009 study by the National Congress of Parents and Teachers and the National Center for Fathering, a nonprofit educational organization, found that 590 of 1,000 fathers surveyed nationwide said they attended school parent meetings. That is up from 470 out of 1,000 a decade earlier.

And in many of the top-rated public schools across New York City, where parent groups have become ever-more-efficient fund-raising machines in the face of mounting budget cuts, fathers with financial expertise and a zest for leadership are not just going to those meetings, but running them.

The shift reflects a number of underlying social trends: more women with demanding jobs, more men underemployed in a lingering recession, more shared parenting responsibilities over all and the professionalization of the PTA itself.

In School District 2, which winds through some of Manhattan’s priciest neighborhoods, at least 10 of the approximately 40 elementary and middle schools now have male parent-group leaders, up from just a couple 15 years ago.

On Staten Island, the male firefighters, police and emergency-medical technicians who used to shy away from PTA meetings now call many of them to order. And in brownstone Brooklyn’s District 15, PTA boards have been inundated with male leadership, in what officials say is a 15 percent jump from five years ago.

For the most part, female PTA leaders applaud the injection of testosterone. But “both women and men would be lying if they were to say gender dynamics were not an issue,” said Michelle Ciulla-Lipkin, a president of the PTA at P.S. 199 on the Upper West Side of Manhattan, where 5 of the 18 board members last year were male.

At P.S. 110 on the Lower East Side, some have said that John Mooren, an investment banker whose platform as PTA president includes the ambitious goal of building a new gym, has been trying to corporatize the once laid-back board. “My response is: we need money,” said Mr. Mooren, 58, whose sons are in kindergarten and first grade.

In the cramped PTA room with the bright pink door at P.S. 75 on West End Avenue in Manhattan, Hector Rios, a co-president, said that being the lone man among eight board members has its downside: “Sometimes I feel like everybody’s husband.”

And at P.S. 3 in the West Village, Nick Gottlieb (a PTA co-president and Papa Nick to students) said that years as a stay-at-home dad have not erased his own perception that he is occasionally an interloper in the land of bake sales, recess volunteers and pajama parties.

“I have to make an extra effort not to be perceived as stepping on people,” said Mr. Gottlieb, who has daughters in kindergarten and third grade. “And I think that does have to do with being a man.”

A 1997 study by the National Center for Education Statistics, a federal agency, found that children whose fathers were involved in their schools were more likely to stay in school, do well and enjoy themselves while they were there.

A decade later, in 2008, the National PTA — a 5.5-million-member organization headquartered in Alexandria, Va. — paired with the National Center for Fathering in the hope of getting more active male members. Its Web site now lists tips on recruiting men, including scheduling meetings in the morning, which many New York City schools now do.

In 2009, the national PTA elected Charles J. Saylor, a construction industry executive and father of four in Greer, S.C., as its first male president.

“I grew up in a home where both parents were involved,” said Mr. Saylor, who started out heading the fund-raising committee at his oldest son’s elementary school because of, he said, “an inability to say ‘no.’ ” Over the years, he said, “I just started noticing on the county, state and national level more men in the room.”

In 2010 the administration of Mayor Michael R. Bloomberg, for its part, started NYC Dads, a 14-agency initiative designed to get men to support their children’s development in and out of school. And Dennis M. Walcott, chancellor of the city’s department of education, pushes father-involvement at events like one in St. Albans, Queens, where fathers brought neckties to P.S. 36 and taught their sons how to tie them.

The surge in male leadership has, in many places, followed a more fundamental shift in the nature of the PTA. Women with advanced degrees, high-powered jobs and technological savvy have brought a new level of sophistication and seriousness to the business of supporting schools. The changed dynamic — committees that are better organized, deadlines that are taken seriously, goals that are more ambitious, schedules that accommodate working parents — helped make many PTAs more comfortable for men.

In interviews around the city, many female PTA leaders praised their male counterparts for overhauling disorganized talent shows, automating bookkeeping, building gardens, cultivating contacts with local politicians and silencing parents who go off on tangents during meetings.

Not that women cannot or do not do the same things, but “men on the board can add a calm,” said Kathy Ellman, who has three sons and who served on the PTA board at P.S. 11. “They can be a little more relaxed.”

Still, for every admiring story about a father whose PowerPoint presentation revolutionized the Read-a-Thon, there is one about the bossy treasurer whose budget-balancing came with an off-putting tone. Or the president who chose the wrong time to talk school politics.

And what seems to be a perennial gripe: men going missing when it’s time to do the grunt work.

“You don’t see many male presidents with the cellophane and the curling ribbon working on the auction baskets,” said Bijou Miller, who lives on the Upper West Side and has sat on a half-dozen school-related boards over the last decade.

Mr. Brea of P.S. 11 said he was focusing on appealing to big-ticket donors and setting up processes that future boards can benefit from. He recently helped convert the PTA into a tax-exempt organization, and helped secure a $2,500 computer program that tracks donations.

At P.S. 295 in Sunset Park, Brooklyn, Dan Janzen used his stint on the grant-writing committee to persuade Marty Markowitz, the Brooklyn borough president, to give the school $150,000 in interactive white boards.

And at P.S. 261 in Boerum Hill, Brooklyn, Rick Knutsen, 46, who has a daughter at the school, can sometimes be spotted playing piano for the chorus, or doing a PowerPoint presentation for the PTA, for which he is a president.

Eli Janney, one of the group’s vice presidents, is often at a table in the lobby, Starbuck’s coffee by his side, peddling tickets to a fund-raising event and imploring parents to “Support the school!”

But Mr. Knutsen has faced some discouraging moments. He was recently dressed down, he said, by a mother irate that he chose the cherished winter concert, which draws a big crowd, to vote on a letter opposing a new charter school nearby. She thought his timing was wrong.

“My kid tap-danced and then I got yelled at,” Mr. Knutsen recalled glumly.

Among the beneficiaries of the new PTA dads are their wives.

“If our daughter comes home and tells us about something that happened at school, Rick pretty much already knows about it,” said Mr. Knutsen’s wife, Frances Barney Knutsen, who works for BNY Mellon. “That’s comforting.”

●●smf: PTAs in New York City schools are not affiliated with the National PTA, but beside for that the story and the thinking and the gender dynamics are the same.