February 21, 2012 - LOS ANGELES :: On Tuesday officials in Adelanto, a California desert town, are set to consider whether parents there can be the first to take over a failing public school under a new state law that is being closely watched around the country. 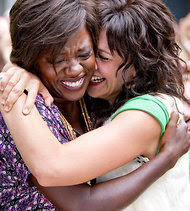 In a rare mix of hot policy debate and old-fashioned screen drama, 20th Century Fox is preparing a September release for “Won’t Back Down.” The film heads smack into the controversies around so-called parent trigger laws that in California and a handful of other states allow parents to dump bad teachers and overrule administrators in bottom-ranked schools.

Viola Davis, an Oscar nominee as best actress for “The Help,” plays a teacher who risks career and friendships to join the revolt. Maggie Gyllenhaal is the single mother who sells cars, tends bar and rouses parents to take charge of their grade school.

Holly Hunter, the union rep, loves her teachers and so she fights the takeover with a ploy you might expect from a corporate villain.

“When did Norma Rae get to be the bad guy?” Ms. Hunter mutters. Her role recalls the title character in the pro-union film “Norma Rae,” as she navigates the ferocious politics of education reform’s nuclear option, the trigger laws.

These measures have backers on both ends of the political spectrum and on both economic extremes: from Bill Gates, whose charitable foundation supports the takeover movement, to the poor or working-class parents of Adelanto. But they have also pushed unions and school administrators into an unwelcome role as opponents of change.

Now the trigger laws have connected with a movie culture whose new preoccupation with timeliness lends urgency and risk to reality-inspired dramas that in the past were usually set safely in the past.

“Won’t Back Down” describes itself as being “inspired by actual events.” But it portrays a fiercely contested school takeover — set in Pittsburgh, though Pennsylvania does not have a trigger law — before any has occurred in real life.

be Texas, Ohio and Connecticut are among states that now permit a trigger process. But a take-over in Adelanto would be the country’s first, according to Ben Austin, the executive director of Parent Revolution, which promotes the tactic with backing from the Bill & Melinda Gates Foundation.

<< IGNORE THE BILLIONARES BEHIND THE CURTAIN   Parent Revolutionary Ben Austin: Brentwood millionaire - part-time LA City Attorney - Green Dot consultant/LA Parent Union employee (the two are the same)  - orchestrator of the attempted charter parent take-overs of McKinley in Compton and Desert Trails in Adelanto - author of the Parent Trigger Law  with backing from the Bill & Melinda Gates Foundation. He wrote the treatment for a movie to produced by a company backed by billionaire developer/stadium builder Philip Anschutz. photo from the LA Times/comments by smf

“I thought it was a prank,” Mr. Austin said of his surprise at a call in which he learned that Walden Media, backed by the conservative-leaning billionaire Philip Anschutz, was shooting a drama in which teachers and parents aim to take charge.

For Walden, the film is a second shot at an education-reform movie. With Mr. Gates and the progressive-minded Participant Media, Walden was among the financial backers of the documentary “Waiting for ‘Superman.’ ”

That film, released in 2010, advocated, as potential solutions to an education crisis, charter schools, teacher testing and an end to tenure. But it took in only about $6.4 million at the box office and received no Oscar nominations after union officials and others strongly attacked it.

“We realized the inherent limitations of the documentary format,” said Michael Bostick, chief executive of Walden. Now, he said, the idea is to reach a larger audience through the power of actors playing complicated characters who struggle with issues that happen to be, in his phrase, “ripped from the headlines.”

“Detachment,” by Tony Kaye, another film set in troubled schools, is set to open in New York and Los Angeles next month.

Daniel Barnz, the director and a writer of “Won’t Back Down,” said he had wanted to recreate the thrill of past action-inspiring social dramas without being snared in partisan debate. Working from an earlier script by Brin Hill, he introduced the parent-trigger mechanism as a plot device but insisted that the character played by Ms. Davis be a teacher, thus bringing teachers into the reform process.

“I am extremely pro-union,” Mr. Barnz said. In the movie’s fictionalized law for Pennsylvania (which, because it was shot there, helped subsidize the film’s $20 million budget with a tax credit), a school takeover could occur only if a majority of both parents and teachers were to demand it, rather than parents alone, as in California.

Wythe Keever, a spokesman for the Pennsylvania State Education Association, a teacher’s union, said his organization, though wary of existing trigger laws, would look more kindly on a system that included teacher input. But he cautioned against another premise of “Won’t Back Down”: that union contracts have sometimes impeded reform.

“Collective bargaining is not the problem,” Mr. Keever said in an interview on Friday. “It produces protections not only for the teachers, but for the students.”

Mark Johnson, who produced “Won’t Back Down,” said the film’s humanity might outshine its politics. “With issues movies, some of those you remember best you remember for the people, not the issues,” he offered.

For Ms. Davis, certainly, the appeal is personal. In what she called her first real leading role — in “The Help,” she fronted an ensemble — Ms. Davis described her character as wrestling personal demons while fighting for something that does not involve race. “I’ve never had that,” she said.

As for education, she added, experience persuades her of the need for teachers and mentors who can operate outside the system. “I’m sorry, I just know if you don’t have a strong advocate for a child, they’re not going to make it,” she said in an interview.

Ms. Gyllenhaal framed her character, a frustrated parent, as “someone who doesn’t think of herself as an activist at all,” but “gets radicalized by the situation she’s in.” She is much like Meryl Streep in the activist thriller “Silkwood,” Ms. Gyllenhaal noted, or the flawed, sexy legal crusader played by Julia Roberts in “Erin Brockovich.”

Events in that film occurred in Hinkley, Calif., which, coincidentally, is near Adelanto, the town where a trigger petition will be reviewed on Tuesday at a school board meeting that could match a big moment in “Won’t Back Down.”

“Next Tuesday night’s board meeting will see a show of force” by both parents in favor of the takeover and the California Teachers Association, whose Adelanto chapter has helped those opposing it, said an internal memo circulated among Parent Revolution executives last week. The memo predicted confrontations between supporters and opponents and said that “a range of provocative techniques” would frame the session.

If teachers were included in a trigger attempt — as happens in “Won’t Back Down” — the California Teachers Association, which has avoided taking a formal position, would look more favorably on the action, suggested Frank Wells, a union spokesman.

Still, he voiced surprise that the parent trigger laws should become a subject for Hollywood at all. “I can’t wait for ‘Vouchers 3-D: The Movie,’ ” he said.

A version of this article appeared in print on February 21, 2012, on page C1 of the New York edition with the headline: In Reality And Film, A Battle For Schools.

smf: I’m sorry, I grew up in Hollywood, I worked in the Film Trade.  Reality and Movies are mutually exclusive. “Based on a True Story” is is close as it gets – and it’s so removed from fact as to be balderdash. In Hollywood “Reality” means unscripted drama, usually produced by a non-union crew. (If you had a script you’d have to pay a writer.)