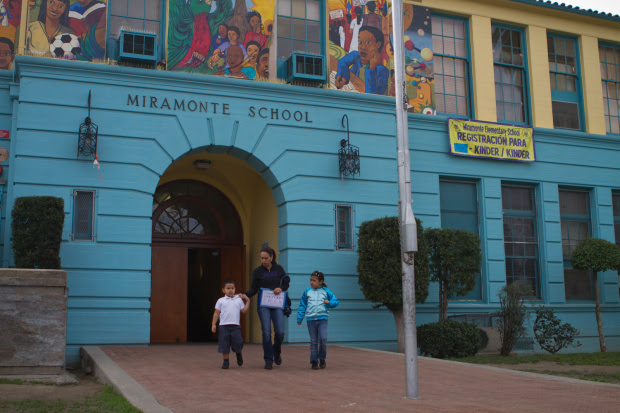 Grant Slater/KPCC - Parents of students at Miramonte Elementary School escort they children out of school on February 6, 2012.

6:20 a.m. | L.A. Unified's Board of Education will consider a resolution at their next meeting that orders the superintendent to reexamine and reassess all complaints of sexual, physical abuse or harassment logged in its system over the last five years, as well as create standards on how and when the district informs parents of abuse allegations against an employee.

The resolution is being crafted by school board member Nury Martinez, who has spoken out about the need for a policy that improves communication between the district and parents, after many parents learned about the arrests of their children's teachers for sexual misconduct through media reports over the last weeks.

LAUSD is already conducting an internal investigation into whether it notified the state's Commission on Teacher Credentialing of accused teachers, and will (re)report all misconduct cases to the commission over the last three academic years to ensure no one slipped through the cracks.

This resolution, if approved by the board, would have the district go back through its employee files over the last five years for any sexual, physical or harassment complaints, and also involve checking in with principals and local superintendents for reports that might never have made it to the district level.

"It's going to be a daunting task," Martinez said. But "I feel we have to go back and reexamine some of complaints to make sure we did our due diligence and parents feel safe."

Martinez said the resolution will ask the superintendent to develop uniform guidelines and procedures on how best to inform parents of LAUSD employees accused of child abuse and other serious criminal behavior, without jeopardizing possible ongoing investigations, and bring back recommendations to the board for a vote within 60 days.

The resolution will also look at how "questionable transfers" take place.

"When people are transferred, sometimes it's for promotional reasons or to teach a different grade level," Martinez said. "Questionable transfers are when one principal needs to alert another — this is what you need to look for — and we currently don't do that. So these people fly under the radar."

The resolution would also look at creating a centralized confidential computer database to house all complaints related to sexual or physical abuse.

Sometimes personnel files do not follow a teacher from one school to another, or if word is passed on to someone at the school, when that person leaves that institutional knowledge is lost.

"People have rights, and certainly we don't want to mess with peoples' rights," Martinez said. "But we also have to ensure there's a centralized way we do business in the district, so we can prevent this from ever happening again."

Earlier this month, parents at Telfair Elementary School in Pacoima found out about a former third grade teacher who had been in jail on molestation charges for about four months via the newspaper. Martinez said she met with upset parents that morning in the school library. Most were outraged they had learned about what had happened from the media.

"Walking into Telfair, I told the superintendent, what breaks my heart is the parents just seemed so distrustful," Martinez said. "We've broken the trust of our parents, and trying to restore that is going to take a long time. We've got to do the right things, notifying parents when an investigation is taking place, but especially, especially when criminal charges and an arrest have been made."

As the mother of a three-year-old, Martinez said she can understand the fear and hurt of parents who want to know their children are safe.

"Parents don't want to hear x, y, z reasons why we don't notify you," Martinez said. "Parents just want to know their children are safe in our schools, and that should be our #1 priority."

In the case of former Miramonte Elementary School teacher Mark Berndt, charged with 23 lewd acts upon a child, the district has said a roughly year-long Los Angeles County Sheriff's Department investigation prevented them from providing information on the allegations to parents. When Berndt was arrested, parents learned what had happened from the media.

Superintendent John Deasy has been meeting with law enforcement officials including the sheriff's department and LAPD as well as officials from smaller incorporated cities within the district, to talk about how to improve notification procedures so that when an arrest of a teacher is made, the district is automatically informed and does not have to wait for a call from a detective or a media report, Martinez said. The district is also working on ironing out guidelines as to what is OK to tell parents without jeopardizing an ongoing investigation, she said.

"In the midst of such a horrific horrific horrible thing that's happened to these kids, something positive has to come out of this," Martinez said. "And the district has got to own this and fix it."

●●smf:  We are way past considering a resolution “…that orders the superintendent to reexamine and reassess…” and all the rest.

We don’t need to correct the past, we need to keep students safe in the future.

And the future starts now.

No more studies, no more resolutions, no more passing the buck to the superintendent. The Board of Education are elected officials and they need to lead, establish and enforce policy, be transparent, and require staff – including the superintendent – to comply.

The non-compliance by the superintendent and LAUSD with existing law, regulations and policy has already been identified and described.

To schedule this matter at the March 13th board meeting where the budget and lay-offs and program cuts and reductions will dominate the agenda relegates this matter to obscurity.

Why should any parents trust LAUSD employees, least of all John Deasy and stff relations? Over the last few weeks we have heard horrible details about abuse, criminal indifference and a culture of corruption so immensely immoral their behavior is even more disgusting than that of Maek Berndt. Now Mr. Deasy wants to shrug off his administration and stffs' complicit with these disturbing crimes and pour over 4 years worth of minor transgressions looking for an excuse to fire more teachers. There are ugly deeds that condemn teachers for what tgey are, and this includes cowards who didn't tell because the silence Deasy claims we must break was imposed by the administrators and officials who are defending Lausd assets not students. Teachers who do tell will be caught up in the net because retaliatory memos pad the files of almost everyone who takes a stand for kids.