LAUSD REDISTRICTING DONE! + COMMISSIONER ASKS: 'Who in the hell has drawn these maps?'

Feb. 23, 2012 || While Los Angeles has remained fixated by an onslaught of teacher scandals, a quieter process to redistrict the school board's boundaries has gone on with little media coverage and a relatively small amount of public input.

Tonight the city's Redistricting Commission will vote on a final map or maps to present to the L.A. City Council by March 1. Ostensibly these are maps the 15 commissioners have prepared after months of work and reflection including hosting multiple meetings with the public for their thoughts.

But according to Dermot Givens, who was appointed by board member Margueritte LaMotte, that's not exactly what has happened.

As a quick bit of background, the L.A. City Council must redraw the lines for the LAUSD's seven Board of Education districts at least once every 10 years to account for population shifts. The Redistricting Commission advises the council on drawing the district lines, and the commissioners must take public input and adhere to certain policies in drawing lines, such as honoring communities with similar interests, neighborhoods, and even population distribution. Their redistricting proposal must be presented to the City Council by March 1. After that, the city has until July 1 to decide on a final map.

Though the commission was appointed in October, it didn't begin working on maps until a few weeks ago, Givens said. Early this morning, Givens was trying to analyze a new round of five maps emailed to them at 3 a.m. in time for tonight's 6 p.m. meeting where he will vote on which map(s) to send to the city. The maps were emailed to the public at 8 a.m., said Doug Vance, the commission's executive director. The tweaked maps are supposed to include suggestions from the commissioners and the public gained over the last week of review. The public will be able to weigh in at tonight's meeting.

But the outreach groups were hired February 3, the Friday before the first public meeting in South Gate. That gave organizers one business day to inform the public of the seven meetings taking place Monday through Thursday of that week, according to a person familiar with the outreach planning process. The person wished to remain anonymous out of fear of losing his position with the city. At least one group was given only a box of 500 papers to create flyers for an area with thousands of people, he said.

At a meeting for District 7 held at Edison Middle School on Feb. 8, dozens of upset parents crowded the school to protest the district's handling of former Miramonte Elementary teacher Mark Berndt, charged with lewd acts on children. The elementary school is currently located in District 7.

However, when the parents learned that the meeting was not for school board members, they left. Commissioners arrived to an empty room.

"We opened and closed the meeting," Givens said. "That was it. That was the District 7 outreach meeting."

At a meeting Feb. 7, for District 4 at Bernstein High School in Hollywood, only four members of the public chose to provide comment. And at the Feb. 6 meeting for District 3 at Reseda High School, fewer than a dozen people showed up, according to reports from people there.

At a regular meeting last Wednesday, commissioner Lindsey Horvath put forward a motion to request a 30-day extension to the LAUSD redistricting process to allow for enough time for community input. The commission, which was missing one member that night, split 7-7 and the motion did not pass.

Yet several meetings have had showings of 50 or more people and have lasted several hours. A public meeting for input on the draft maps was held at 1 p.m. on President's Day this past Monday at Hollenbeck Middle School, organizers were surprised by a crowd of about 50 people.

At a public hearing Tuesday night at Hamilton High School, at least 70 people showed up, primarily to show their support for school board member Steve Zimmer. Depending on which map is approved, Zimmer could be drawn out of his district and therefore unable to stand for reelection unless he moves.

Many speakers, including Jackie Goldberg, the former school board president, city councilmember, and former Assemblywoman and chair of the Education Committee in the state's legislature, showed up to speak against what she described as partisan politics behind the map drawing. About a dozen also spoke about other issues related to the maps, including the importance of keeping middle and elementary schools within the same boundaries as their area high schools.

Doug Wance, the executive director for the Redistricting Commission, said it is up to the commissioners to set the tone and schedule for their meetings.

"It's hard to put together a map that divides up and creates these evenly distributed districts, keeping all of those factors, communities of interests, neighborhoods together, feeder patterns for the high schools," said Doug Wance, the executive director for the Redistricting Commission. "There's a lot of competing interests. At the end of the day, the commissioners are weighing all of those interests and they are trying to create a cohesive vision. And it's hard and not everyone's going to be happy."

Commission members were split into three ad-hoc groups of five to draw up proposed maps for certain districts. In a whirlwind of meetings Feb. 13, each group passed on its bits and pieces of proposed maps to the next. By the time Givens' group got the materials to get to work it was about 5 p.m.

The six or seven maps drawn up by the different groups of five commissioners were then brought together under a reconciliation group made up of seven commissioners who were charged with piecing the suggestions together into suggested maps. Commissioners were emailed the maps late Feb. 14, the day before their Feb. 15 meeting to adopt the pre-final maps.

Givens, who works as an attorney during the day, didn't see the full maps until he got to the meeting. And out of the 50 submissions from the public, only one map proposed by MALDEF and the National Association of Latino Elected Officials was included as possible map C.

"The first thing I thought was who in the hell has drawn these maps," Givens said. "...The way I see it, we're basically advising the mysterious map maker and they're taking our input, but we're not drawing the map."

"I take umbrage with anyone saying 'I gave them my thoughts and I didn't see it,'" Wance said, adding that there were multiple training sessions where commissioners could learn to draw maps.

But Givens only laughed at how the last weeks have unfolded. He said he still wasn't sure how he would vote tonight.

"At the end of the day, do the means justify the ends?" Givens said. "The end is probably OK, but how they got there, the process, is totally screwed up." 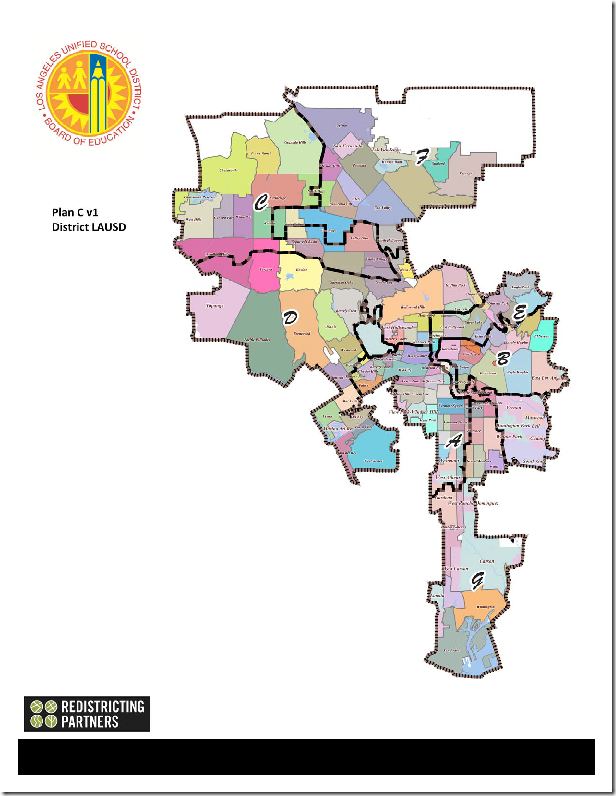 NOTE: BY AMENDMENT THE BOARD DISTRICTS WILL BE DESIGNATED BY NUMBER RATHER THAN LETTERS. There are other minor tweaks by individual census blocks. The Executive Director of the Commission claims the alphabetical bad idea was his idea. This is questionable as the original MALDEF/NALEO (Mexican American Legal Defense Fund/National Association of Latino Elected Officials) datasets – from which this map is drawn – and which failed to disaggregate African American voters from the likely voter pool while recognizing Jewish, Latino, Armenian and Hispanic etc. (by surname) were alphabetical rather than numerical.