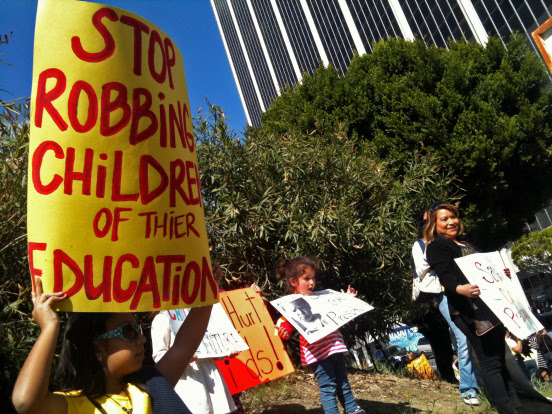 Adolfo Guzman-Lopez/KPCC: Several hundred people protested outside L.A. Unified headquarters as the school board was set to cut funding to preschool and adult education to close a $557 million funding deficit.

14 Feb, 2012 | 2:13 p.m. :: At today's Los Angeles Unified School District Board meeting, the board debated a $557 million budget cut to close a funding deficit in the district's $6 billion budget, but they delayed the vote until their March 13 meeting. The cuts include eliminating the district's adult education, preschool and most elementary arts programs.

Hundreds protested outside the board meeting, with many chanting "Save our schools." Most of those gathered were supporters of adult education classes. Police eventually closed the street in front of LAUSD headquarters, just west of downtown L.A.

Board member Marguerite LaMotte welcomed the delay in the budget vote. “It’s going to give us a little more time,” LaMotte said as she told a packed board room to urge state and federal lawmakers to increase funding for public schools.

The adult education program serves about 350,000 students, mostly through English as a Second Language classes. The district is considering eliminating the program’s $120 million budget.

L.A. city councilman Richard Alarcon and elected officials from South Gate and Huntington Park addressed the Board opposing cuts to adult education. Alarcon told the board that the $178 million adult education program, which serves 300,000 people, allows dropouts and others to earn a high school diploma and learn vocational trades.

Other protestors wore yellow T-shirts to demonstrate their anger over a large cut to more than 100 L.A. Unified-funded preschools.. They were mostly parents of preschool-age kids.

L.A. Unified said it may send out 7,500 preliminary layoff notices, mostly to teachers. The teachers union argued that that number of layoffs notices is unnecessary.

The board also considered placing a temporary parcel tax initiative on the November ballot to raise between $200 million and $300 million to help close the deficit.

Sorum, of the band Velvet Revolver and formerly with Guns N' Roses, told the board Tuesday that music helped keep him in school because he was not good at academics.

Sorum says cutting arts would be a travesty and wants to get the entertainment community involved in keeping arts in public schools.

There were also elected officials present from small cities in LAUSD, including Bell, Cudahy and Maywood.

Correction: An earlier version of this story said LAUSD's next meeting would be March 8. It will be held March 13.

This story has been updated with contributions by AP and Mike Roe.

The superintendent, however, is allowed to begin preparing layoff notices for thousands of teachers and support staff as talks continue to find a way to save adult and early education programs. Members of United Teachers Los Angeles, ...

AP LOS ANGELES—The Los Angeles Unified School District's board on Tuesday postponed a decision to slash more than $500 million from next school year's budget, including the elimination of adult education, preschools and elementary arts.

Hundreds of adult-education and early-education supporters rallied outside of Los Angeles Unified School District headquarters Tuesday protesting a plan that would eliminate the budgets of the two programs. Students, teachers and supporters of the ...

LAUSD Adult Education Cuts To Be Voted On Tuesday

Thousands of students and teachers at the nearly three dozen adult education and occupational centers in Los Angeles could be in for a very bitter Valentine's Day. The Los Angeles Unified School District board is set to vote Tuesday to cut the $200 ...

By Tessa Stuart Tue., Feb. 14 2012 at 7:54 PM ​LAUSD's Board of Education issued a stay of execution for the district's adult education programs today at a meeting that could almost pass as star-studded. The event was so crowded that hundreds were ...

Arts, Adult, and Early Childhood Education Get Temporary Reprieve from ...

Advocates of art, adult, and early childhood instruction received some encouraging news today while the Los Angeles Unified School District board opted to delay the adoption of a controversial budget item that would wipe out three significant branches ...