“Please know that we will not ask about your or anyone’s immigration status, nor will any information be shared with immigration authorities” 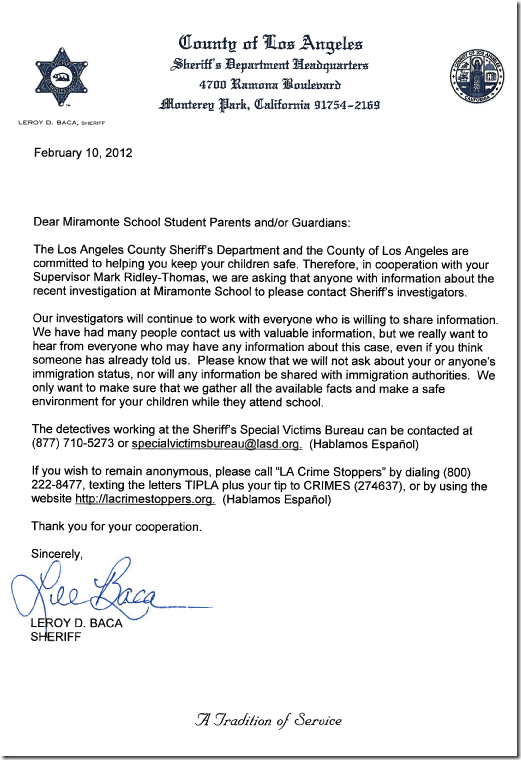 ‘I don’t trust them’: How fear of deportation is keeping some Miramonte parents quiet

February 9, 2012 | 11:17 AM :: As parents at South Los Angeles’ Miramonte Elementary School begin coming forward and taking legal action in light of the lewd-conduct charges filed against two teachers in recent days, how to convince those who don’t have legal immigration status to speak up?

Los Angeles County Sheriff’s Department officials have been putting the message out through the media that in spite of the department’s federal-local immigration enforcement partnerships, those who come forward to report the suspected abuse of a child won’t be questioned about status. But many parents are not going to be easy to convince.

“That is what they say, but it’s one thing that they say it and another that they do it,” said the father of a 10-year-old female student at the school, a man named Raymundo who was reluctant to use his last name because he is undocumented. “I don’t trust them. If I had a ferocious pit bull at home, and I told you to come in, it won’t bite, what would you do?”

Raymundo is one of several parents who, rather than go directly to the authorities, have sought legal counsel. He and other parents are among those filing personal injury lawsuits against the school district on behalf of eight students whose families believe they were abused by the teachers, both charged with committing lewd acts against children. The parents’ attorney, Jessica Dominguez, was announcing the lawsuits this morning in a press conference with immigrant advocates.

The Miramonte case illustrates how victims of abuse, including domestic abuse, who live in the shadows are very often reluctant to come forward for fear of deportation. These victims do have rights, including to a special visa for crime victims referred to as the U-Visa, which some of the Miramonte parents are pursuing. But there are some who won’t be convinced.

The neighborhood in which Miramonte Elementary sits is a part of South Los Angeles that has undergone demographic changes in recent decades, shifting from majority black to majority Latino. Nine-eight percent of the student body is now Latino, and more than half the students are English learners. Many of their parents are first-generation immigrants, and not all have papers.

Dominguez said she knows of at least two families at the school who are refusing to come forward because they don’t want to be found out. Raymundo said he’s spoken to several undocumented parents who believe their children were harmed.

Raymundo recalled how once, after his car was hit, he failed to report the accident for similar reasons.

Gaining the trust of immigrant communities has always been a challenge for police, but perhaps more so lately. One of the chief criticisms of the federal-local immigration enforcement partnerships that have come into use in recent years, like the Secure Communities fingerprint-sharing program, say these further alienate immigrants, especially undocumented immigrants who may be reluctant to report a crime they have been a victim of or have witnessed.

Meanwhile, the Sheriff’s Department has been trying to assure parents involved in the Miramonte scandal that there will be no repercussions if they speak up.

“They have Sheriff Lee Baca’s word that there will not be prosecution or even inquiries into anybody’s legal status in this country,” Sgt. Dan Scott said by phone yesterday. “We are seeking victims, witnesses, or anybody that has information about this case to please come forward to the Sheriff’s Special Victims Unit, which is our normal process. We will not ask their legal status. The Sheriff specifically wants that message out: We will not be inquiring as to their legal status.”

What comes of undocumented school families who step forward has been a question asked of the department since shortly after the teacher arrests were announced. The Sheriff’s Department participates in two federal-local partnerships: Secure Communities, which allows for fingerprints taken at local jails to be shared with immigration officials pre-conviction, and 287(g), which allows information about inmates in Los Angeles County jails to be shared with immigration authorities.

The Los Angeles Police Department, on the other hand, has a policy known as Special Order 40, which bars officers from inquiring about immigration status. Not that all of the families now finding themselves in a position to decide whether or not to talk to authorities know there’s a difference. All too often they shy away from badges in general, as Raymundo did recently on campus.