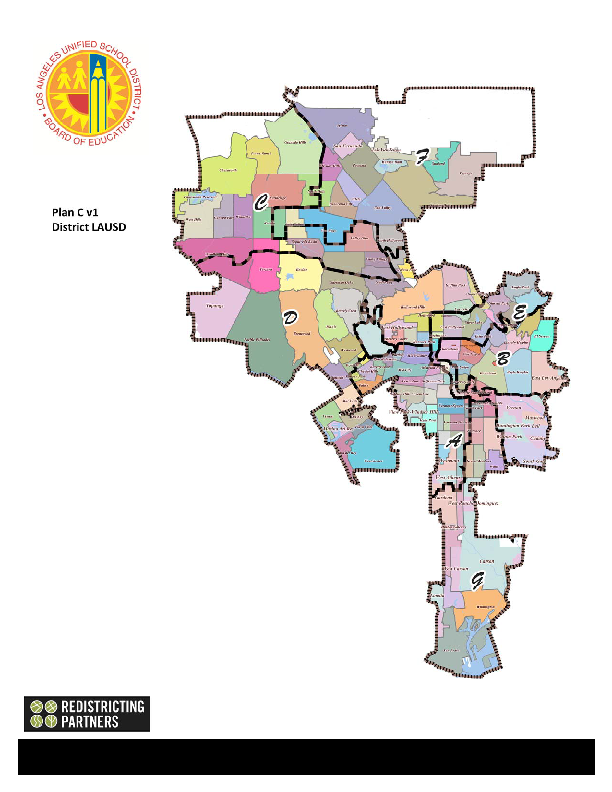 This is the basic map that was approved Feb. 23, 2012 by the LAUSD Redistricting Commission. A final version of the plan will be voted on Feb 29.

02/24/2012 09:35:25 PM PST  ::  The citizen commission redrawing LAUSD voting boundaries discarded its original draft maps and adopted a plan that carves out a third majority district for the city's Latino population.

However, board member Bennett Kayser finds himself representing a region where 56 percent of his constituents are Latino citizens of voting age. The new District 5 would be shaped like a pair of earmuffs, stretching from Eagle Rock to East Hollywood, with a skinny swath skirting Koreatown and downtown, then broadening again from Vernon to South Gate.

Kayser's office, as well as two Latino rights groups, were unhappy with the boundaries and said they were closely reviewing the plan.

"The southeast communities are not united with others that share the same economic and social interests," said Rosalind Gold, a senior policy official with the National Association of Latino and Elected Officials.

NALEO had partnered with the Mexican American Legal Defense and Educational Fund to craft a map that secured a new, more compactly drawn Latino-majority district in the southeast region.

"We're reviewing the maps and evaluating communities of interest and the impact of the Voting Rights Act," said Steven Ochoa, the national redistricting coordinator for MALDEF.

The map is expected to be finalized next Wednesday when the commission holds its final meeting. It then goes to the Los Angeles City Council, which can make amendments of its own.

Although the map was approved about 11 p.m. Thursday, copies were not yet available for public review by the end of business Friday.

"The maps were a result of a confluence of events and listening to what the public had to say," he said.

Wance also addressed criticism that the public wasn't sufficiently informed about the redistricting process or given enough time to analyze the proposed maps.

"Outreach was and is an issue when you're trying to reach that many people," said Wance, who estimated the panel spent about $120,000 of its $650,000 budget on community relations.

He said the commission will continue to publicize the LAUSD redistricting process as it shifts to the City Council.

While none of the school board members were drawn out of their districts, there would be several changes.

District 3 board member Tamar Galatzan would lose heavily Latino neighborhoods in Van Nuys and Reseda to Martinez and parts of Studio City and Toluca Lake to Steve Zimmer.