DUNCAN+RHEE: Amid a Federal Education Inquiry, an Unsettling Sight 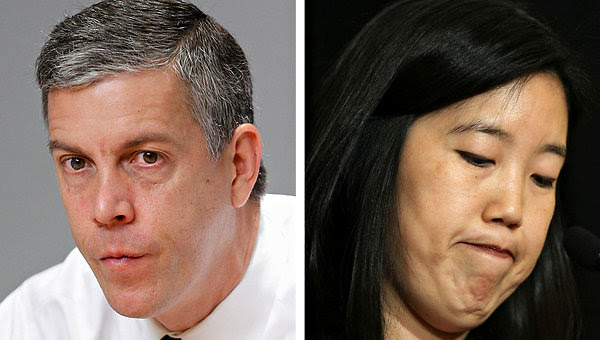 A spokesman for Education Secretary Arne Duncan, left, cautioned against the presumption of guilt in an investigation of Washington schools under the direction of Michelle Rhee. photos:Pablo Martinez Monsivais/Associated Press; Alex Wong, via Getty Images

Published: February 26, 2012 What was Arne Duncan doing sharing the stage with Michelle Rhee at a recent education conference?

Mr. Duncan is the education secretary.

Since last summer, the Office of the Inspector General in Mr. Duncan’s department has been investigating whether Washington school officials cheated to raise test scores during Ms. Rhee’s tenure.

You would think Mr. Duncan would want to keep Ms. Rhee at arm’s length during the investigation. And yet there they were, sitting side by side last month, two of four featured panelists at a conference in Washington about the use of education data.

“This is an amazing panel, so I’m thrilled to be part of it,” Mr. Duncan said in his opening comment.

If there is any hope of getting to the bottom of what went on in the Washington schools — whether Ms. Rhee is as amazing as Mr. Duncan said, or whether test scores were inflated by cheating — it is through the inquiry by the inspector general. (Catherine Grant, a spokeswoman for the office, confirmed that an investigation was under way, but would not give details.)

Ms. Rhee’s reputation as a national leader of the education reform movement has rested on those test scores, which soared while she was chancellor. Then, last March, USA Today published the results of a yearlong investigation of the Washington schools that found a high rate of erasures on tests as well as suspiciously large gains at 41 schools — one-third of the elementary and middle schools in the district.

Since then, Ms. Rhee has refused to talk to the reporters who know the story best, although she has been talking to many other people.

During the last year Ms. Rhee has, according to a spokeswoman, scheduled more than 150 public appearances as the head of Students First, an advocacy group that favors vouchers, charter schools and evaluating teachers by test scores, while opposing tenure and teachers’ unions.

Ms. Rhee has also given speeches around the country for a fee of up to $50,000, “plus first-class expenses,” according to an e-mail from Peter Jacobs of the Creative Artists Agency that was posted online by one of Ms. Rhee’s critics. (Emily Lenzner, spokeswoman for Ms. Rhee, said that the former chancellor charges for a “handful” of speeches a year and that the “amount varies.”)

Does it really matter that Secretary Duncan has appeared onstage with Ms. Rhee?

Mr. Duncan doesn’t think so, according to his spokesman, Justin Hamilton. “It’s irresponsible for a New York Times columnist to presume guilt before we have all the facts,” Mr. Hamilton wrote in an e-mail. “Our inspector general is investigating the cheating issue in D.C. public schools, and we should all let the findings speak for themselves.”

The Office of the Inspector General is an independent oversight agency, although the secretary can refer cases for investigation.

Richard L. Hyde is one who believes that Mr. Duncan should keep his distance. Last year, Mr. Hyde directed 60 state agents in a nine-month investigation of cheating in the Atlanta public schools. They identified 178 teachers and principals in nearly half of the city’s schools who cheated — 82 of whom confessed. The case they built is so strong that criminal indictments are expected.

Mr. Hyde said that to get witnesses to cooperate in such investigations, they must believe that the political leadership is committed. “I’m shocked that the secretary of education would be fraternizing with someone who could potentially be the target of the investigation,” he said. “The appearance of a conflict of interest is troubling because it can cause the public to lose faith in the investigation.”

In Atlanta, the governor at the time, Sonny Perdue, provided extensive resources for the inquiry and then stayed away. “I purposely kept a very low profile and let investigators do their work,” Mr. Perdue said in an interview.

Ms. Lenzner, the spokeswoman for Ms. Rhee, noted in an e-mail that Washington’s scores on the National Assessment of Education Progress had improved under Ms. Rhee’s leadership, a sign that the gains made on other tests were real. The federal test is considered the gold standard of assessments and beyond tampering.

Washington did record some of the highest gains in the nation on the federal math tests. However, reading results were less impressive, with eighth graders scoring lower under Ms. Rhee than they had a decade before.

In Atlanta, gains on the federal tests were even higher than Washington’s, yet cheating was pervasive on the state tests that are used to rate schools, principals and teachers and to pay performance bonuses.

The Atlanta and Washington situations are similar in several ways. Ms. Rhee and Beverly Hall, the former Atlanta superintendent, both relied on fear to motivate, relentlessly driving their work forces. Dr. Hall told principals that if scores didn’t go up enough in three years, they’d be fired. Ms. Rhee bragged about how hard she pushed. “We want educators to feel the pressure,” she said.

Erasure analyses of answer sheets indicated the possibility of widespread cheating in both districts.

In Atlanta, as in Washington, it was journalists who first questioned the test results. The Atlanta Journal-Constitution published its first articles in 2001. In the years before widespread cheating was documented by state investigators, Dr. Hall denigrated the newspaper coverage and the education establishment rallied to support her.

Michael Casserly, director of the Council of Great City Schools, called the early news reports about Atlanta “badly misleading” and based on “very bogus analysis.” Kati Haycock, president of the Education Trust, a nonprofit student advocacy group, wrote that scores were being questioned because people wouldn’t believe that children of color could achieve.

Both Ms. Rhee and Dr. Hall conducted their own internal investigations that found little or no cheating. Both cities hired Caveon, a private test-security company, which reached the same conclusion. The state investigative report for Atlanta criticized the company, noting that “many schools for which there was strong statistical evidence of cheating were not flagged by Caveon.”

In 2009, Ms. Rhee announced that Caveon’s inquiry had cleared the district, but the company’s owner, John Fremer, disagreed, saying that the scope of the investigation was limited and that he was not asked by Ms. Rhee to do more.

Of course, just because there are similarities does not mean that the same level of corruption that existed in Atlanta exists in Washington.

But the public is entitled to know. And school officials cannot be trusted to investigate themselves. Kaya Henderson, who was Ms. Rhee’s deputy and is now the chancellor, has called the cheating accusations “harmful” and “unfounded.”

It will take courage for people to come forward and bear witness.

So it is disheartening that federal officials have selected Ms. Henderson as a keynote speaker for a daylong conference on Tuesday that is sponsored by the department’s National Center for Education Statistics.

It is billed as a “Testing Integrity Symposium.”