THE SURPRISING THING ABOUT SCHOOLS WITH LOTS OF TECHNOLOGY: The best way to use computers in schools is “moderately” + smf’s 2¢ 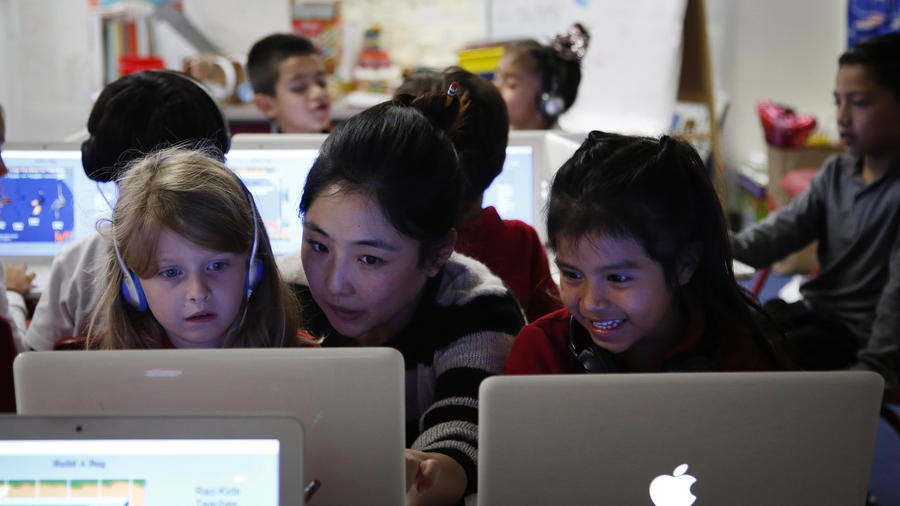 Sept 15, 2015  ::  More time spent on technology in the classroom doesn’t necessarily help kids do better in school, a new study has found.

In fact, above a certain threshold, an over-reliance on technology might actually detract from learning.

“Limited use of computers at school may be better than no use at all, but levels of computer use above the current … average are associated with significantly poorer results,” states a new report released late Monday by the Organisation for Economic Co-operation and Development.

“Students who use computers very frequently in school don’t outperform students who use them moderately, even when we modify for social background,” OECD’s education director, Andreas Schleicher, said in an interview.

It’s a lesson Angelenos might want to consider as the Los Angeles Unified School District rethinks its relationship with educational technology, thanks in part to a failed attempt to provide iPads to every student districtwide. In Los Angeles, the FBI is investigating the bidding process that led to the iPad program, which now includes other devices.

Supt. Ramon Cortines decided in February that the $1.3-billion program was too expensive to continue. At the start of this school year, only one school had devices for every student because the other schools had not yet had their technology instruction plans approved by the district.

L.A. Unified chose the schools now slated to receive the devices by examining campuses and determining which schools had such minimal or outdated technology that they needed an immediate boost, or which schools were optimally positioned to incorporate new digital tools into their lessons. The district also chose schools that were part of a U.S. Justice Department settlement agreement to provide more resources to schools with large populations of black students.

A report released earlier this month found that the district still struggles with integrating devices. That LAUSD-commissioned report -- conducted by the American Institutes for Research -- found that teachers didn’t receive enough tech support, and that Wi-Fi access on campus remained inconsistent.

Now, an L.A. Unified task force is devising a technology plan for the district.

The new study is based on the Programme for International Student Assessment (PISA) test, an international exam given to 60,000 15-year-olds in 32 countries. OECD has previously released results on the subject tests — many Americans are familiar with these scores, as they create educational rankings between countries.

Monday’s report marks the release of the digital test associated with PISA — in general, students took the pencil-and-paper test in the morning and the computer test the afternoon of the same day.

Overall, the report finds that the best way to use computers in schools is “moderately.”

What exactly does moderately mean? Not too often, and for deliberately chosen activities. For example, as Schleicher notes, students who “practice and drill” on computers in school at least once a week perform more than 20 points below students who don’t do this.

And while some degree of browsing the Internet for assignments is helpful, performance drops significantly, on average, when it is done “almost every day” or more regularly.

Why might this be? “If you have 21st century technology added to 20th century classrooms, it might be unrelated and take opportunities away,” Schleicher said. “Schools probably haven’t become good enough at the kind of pedagogies that use technology well.”

If you have 21st century technology added to 20th century classrooms, it might be unrelated and take opportunities away. - Andreas Schleicher, OECD's education director

For example, while a school might call itself tech-savvy for having students copy and paste answers on Google to pre-fab questions on smartphones, “it won’t make kids smarter,” Schleicher said. “If it’s used on a smaller scale, which is more useful, it’s usually more interactive teaching. If you want students to become smarter than a smartphone you have to think about instructional methodology and learning environment.”

That’s another lesson for Los Angeles. Cortines has said that the district lacks a coherent way for wrapping technology into pedagogy.

According to a self-reported survey, students across OECD countries spent at least 25 minutes online every day at school. That number ranges from 58 minutes in Australia to less than 10 minutes in South Korea.

American students performed better on the reading test on screens than they did on paper. On the general PISA, the U.S. performed at the average level of OECD countries. But on the digital test, America performed slightly better than average. And on PISA’s pencil-and-paper math test, Americans performed below average. But taking the test online bumped the U.S. up to the OECD average.

“We were quite disappointed by the findings in general,” Schleicher said. “Bringing technologies to the classroom didn’t seem to be related to positive skills outcomes.” There’s a lot of investment in educational technology right now, he said, “but we haven’t gotten it right.”

This is not “just another survey”, this is the PISA/OCED Survey – the gold standard in comparing educational outcomes across nations/around the world (see blizzard of news stories below) used frequently by those who would beat-up the US education system and and American teachers.

It is also interesting (in a couriouser+couriouser way) that The Times provides links to the AIR report critical of LAUSD’s tech roll-out – which is about something else - but none to the actual survey that that this article is about – which follows. 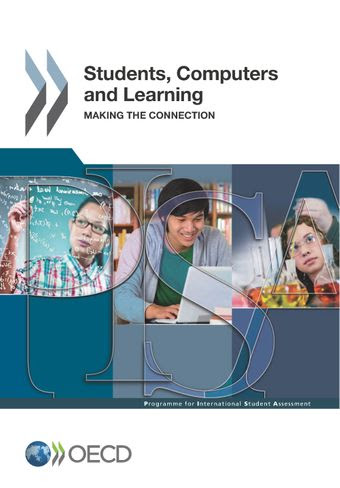 Are there computers in the classroom? Does it matter? Students, Computers and Learning: Making the Connection examines how students’ access to and use of information and communication technology (ICT) devices has evolved in recent years, and explores how education systems and schools are integrating ICT into students’ learning experiences. Based on results from PISA 2012, the report discusses differences in access to and use of ICT – what are collectively known as the “digital divide” – that are related to students’ socio-economic status, gender, geographic location, and the school a child attends. The report highlights the importance of bolstering students’ ability to navigate through digital texts. It also examines the relationship among computer access in schools, computer use in classrooms, and performance in the PISA assessment. As the report makes clear, all students first need to be equipped with basic literacy and numeracy skills so that they can participate fully in the hyper-connected, digitised societies of the 21st century.