¿COMMUNITY ENGAGEMENT BY ROBOCALL?: L.A. Unified wants to know when parents want school to be in session (Redux) 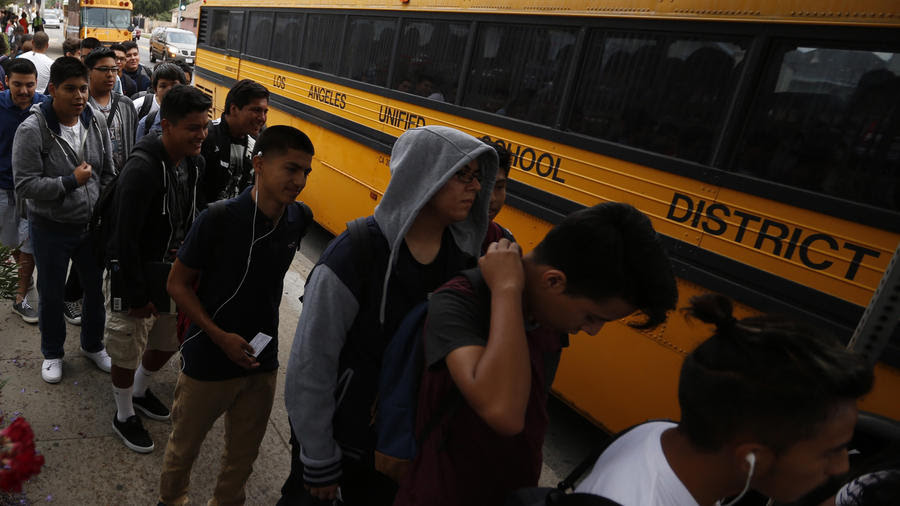 Students line up to board buses for the start of school in August this year. (Mark Boster / Los Angeles Times)

The survey sought feedback on when the school year should start, how long winter break should last and how important it is to have the same days off for elementary and secondary schools. The district also wanted to know how people feel about having the first semester finish before winter break and about the timing of enrichment and intervention programs.

The effort arose out of discontent with the L.A. Unified School District's decision to move up the start of the traditional school year into August, rather than beginning after Labor Day, in September.

Calls went out to 550,000 households, including both parents and employees. The automated phone system made the first attempt Friday night, and then tried again on Saturday if it collected no information.

But the system’s software is designed to pause if there is noise on the receiving end. And background noise, apparently, was enough to derail the effort. In all, the phone system collected 58,000 surveys, but the district also received about 50 complaints.

“Some people said they couldn’t respond to the survey,” said Paul Ishimaru, an administrator in operations who manages the phone system. With background noise over a certain level, the system “may either attempt to start and then stop, and or it may never deliver the message.”

One option for an academic schedule would be a significant departure from past practice: a five-week break in summer and a seven-week vacation in winter.  Although that alternative was one of six presented to a calendar committee, officials have not seriously considered such a schedule in recent times.

The survey presented that approach by asking parents if they would like a “year-round” style calendar that allowed for four-week intercession classes in both the winter and summer. These courses would allow students to catch up or get ahead academically.

In past years, there was no phone survey. Instead, district staff worked out the schedule with input from employee unions. The calendar then went to the Board of Education for approval.

On the recommendation of Supt. Ramon C. Cortines, the district had switched to the earlier, August start in 2011. The goal was to allow high school students to avoid having first-semester finals after winter break.

Before the switch, parents were able to weigh in with their views on the calendar through an online survey, but few participated.

Since then, a contingent of parents has been persistently unhappy over the early start. For one thing, they said school was in session during more of the intense heat of summer, especially a problem in the San Fernando Valley.

Some parents also had greater difficulty scheduling vacations and summer enrichment programs for their children. Parents turned in petitions with thousands of signatures requesting that school begin after Labor Day.

The district bent a little this year, starting later in August.

The discontented parents had an ally in school board member Richard Vladovic, who wanted the issue revisited, and Cortines agreed to do so.

The current calendar committee involves about 70 participants, including parents and students. The goal is to establish a calendar for the next three years. The survey was to provide broader feedback, said Zsuzsanna Vincze, director of school operations.

The feedback process was supposed to end Sept. 29, but has been pushed back as officials ponder their next move.

“I apologize for the inconvenience,” Cortines said in an email. “We are addressing these concerns. I have instructed staff to look into these glitches and reach out to those who had issues. Anyone who has not had the opportunity to take the survey will be given a chance to do so.”