By The Times Editorial Board |  http://lat.ms/1gawbbZ 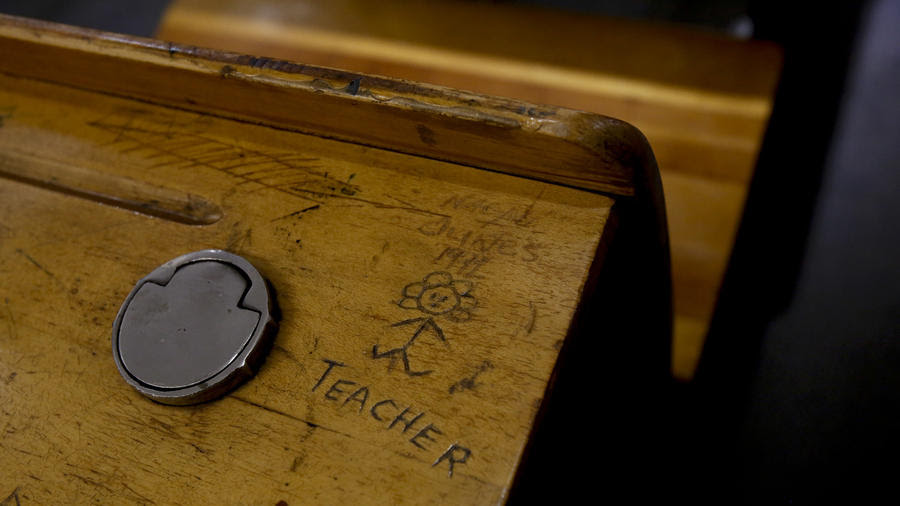 Detail of a historical school desk on display at LAUSD headquarters in Los Angeles on March 11, 2014. (Los Angeles Times)

9 Sept 2015  ::  Defending against a lawsuit brought by a former middle school student who'd been sexually abused by a teacher, a lawyer for the Los Angeles Unified School District made the outrageous assertion that the girl — who was 14 at the time of the abuse — bore some responsibility for it because she had engaged in the encounters willingly.

Even more stunning, this was the second time the district used this odious line of reasoning. As L.A. Unified tries to teach its students, there's more to life than winning — such as acting with principles and recognizing one's larger mission.

Any expert on sexual abuse could tell the district's lawyers why a 14-year-old cannot be held responsible for a sexual relationship with an adult. The reason for laws protecting minors against sexual predators is that they lack the emotional and developmental maturity to make adult decisions. They are easily persuaded by adults. They are impulsive. And in the case of L.A. Unified in particular, too many of them come from lower-income communities that don't have the resources to ward off those who would take advantage of them.

Nevertheless, in response to the former middle schooler's lawsuit, the district's then attorney, W. Keith Wyatt, offered a defense last year that was based in part on the girl's sexual history and what he claimed was her consensual participation in the sexual incidents. After the public howled at his comments about the case, the district barred him, an outside attorney, from future work on its behalf. The district also won the case at trial — not because of the girl's actions but, reasonably enough, because it had no way of knowing about the relationship between the student and teacher, and so couldn't have intervened to protect her.

The girl's family appealed, and when the appeal was heard last week, the district's new lawyer made the same argument about the girl bearing responsibility.

Some lawyers may believe it's their job to win by whatever means possible, but that can't be true for the ones who represent L.A. Unified. The school board should have adopted a policy last year that it would not tolerate such legal arguments being made on its behalf. Instead, it has sent a terrible message to its students and their families.

Legislation signed into law this summer will bar such outrages in future civil trials involving alleged sexual abuse of minors. It prohibits defendants in such cases from arguing that the sex was consensual — an argument that already was not allowed in criminal trials. But L.A. Unified's lack of moral courage, when it was an option and not the law, will sting for a long time.