10 Sept 2015  ::  Echoing a nationwide downward trend, most California students are falling short of state learning targets and are not on track to succeed in college, according to the results of new, more rigorous standardized tests released Wednesday.

And the picture is even worse for L.A. Unified, the nation's second-largest school system, than it is for the state. Across California, 44% of students achieved targets for their grade in English, while 34% did so in math. In L.A. Unified, the figures were 33% and 25%.

“I am encouraged that many students are at or near achievement standards. However, just as we expected, many students need to make more progress.” 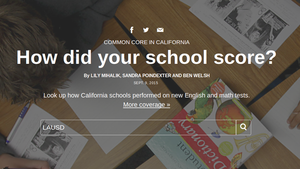 How did your school score? >>

Indeed, officials said they were prepared for the low scores.

Questions based on the new “Common Core” standards, which have been adopted in 42 states, are more difficult than those on California's previous test. And students for the first time took the exam on computers.

The testing is designed to provide a more detailed and accurate snapshot of achievement.

Students are given questions that require deeper thinking about a theme in literature, for example, or about the concepts of algebra or geometry. They get more or less difficult based on which ones a student answers correctly, and in theory no two students will be presented with exactly the same test.

The new test also requires some written answers, in addition to the more familiar multiple-choice format.

The results are not as discouraging as they seem, former state schools Supt. Bill Honig said, because the bar is set so high: what students need to succeed at a four-year college.

An 11th-grader who scores below expectations, for example, would be considered unprepared for college. Younger students scoring below grade-level goals would be classified as not on track for college.

“Not everybody is going to attend a four-year college,” Honig said.

Even though student achievement needs to improve, he said, the scores would be higher if calibrated to the skills needed to attend a community college, get a two-year nursing certificate or pursue a career in manufacturing.

Still, the just-released results could prove disheartening to parents and school district officials who had thought, based on previous tests, that their students were doing better. 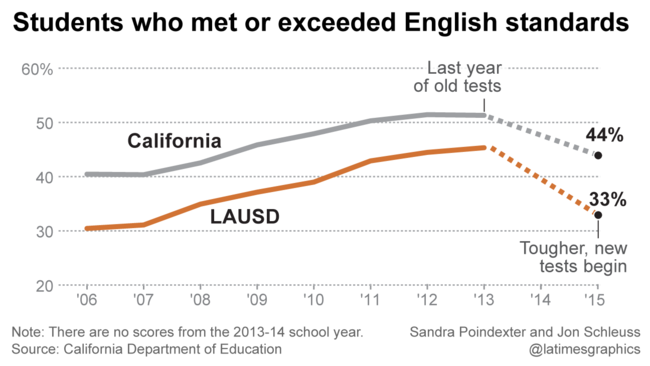 Under the Common Core-linked test, 40% of California third-graders scored at grade level or better in math. That compares to 66% who did so on the former test. And in English, 38% of third-graders met expectations or better on the new test, compared to 45% previously.

“What's critical,” said state Deputy Supt. Keric Ashley, “is the communication that happens between teachers and parents” so that the results are not looked at in a vacuum.

In recent years, L.A. Unified had narrowed the gap between its test results and those in other districts, but that trend reversed this year.

“As we all expected, the overall results of these more rigorous assessments show that we still have more work to do,” Supt. Ramon C. Cortines said in a statement.

For some parents, such explanations are not enough.

“I don't understand how the new data compare to old data, when you take into account the shift to Common Core teaching standards,” Los Angeles parent Risa Morris said. “Is it possible that students actually really were doing better before and the new curriculum is causing students to fall behind?”

smf: Risa Morris is right; she has a reasonable expectation that she can compare the old+new results. And The District and The State of California has done a piss-poor job of explaining why she cannot+should not. That poor job makes teachers, schools, administrators and the new standards and the new test look bad.

According to experts, the Common Core learning goals have changed both what is taught and how. The idea is to get students to think more deeply, solve problems and better express themselves in writing and speaking. Those objectives are reflected in the new test.

Going forward, the test-preparation package for schools includes a digital library of resources for teachers and periodic exams for students to sharpen their skills.

One area that will require attention is the substantial achievement gaps that separate the performance of Asian and white students from their black and Latino peers. 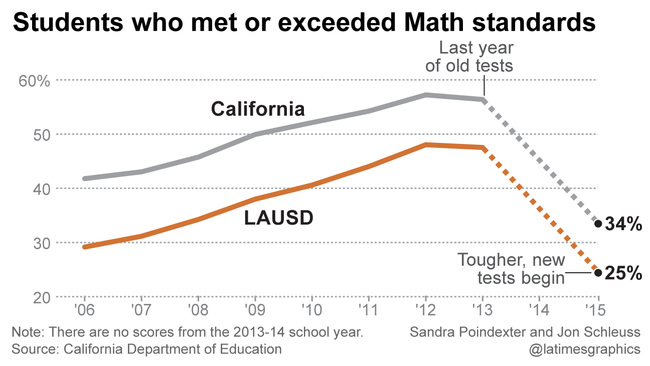 In English, 72% of Asian students and 51% of white students tested at grade level or better; 28% of black students and 32% of Latinos met those standards.

In addition, 21% of students from low-income families scored proficient or better in math; 53% of those from more affluent families did so.

Although scores generally were lower at all schools, the highest scoring campuses declined less. And those typically serve students from more affluent families or those with fewer educational challenges.

Canyon Elementary in L.A. Unified, for example, saw its English proficiency rate decline by only two percentage points, from 95% to 93% of students. The school has only five students classified as English learners.

“Addressing achievement gaps needs to be at the forefront of any conversation regarding preparing students for college and career,” said Ryan J. Smith. of Oakland-based Education Trust-West, a research and advocacy group.

By adopting a tougher test, the end result should be graduates who are better prepared for college and the work force, said David Rattray, a vice president with the Los Angeles Area Chamber of Commerce.

“As far as we can tell, these are the highest standards we've ever established,” he said.

California has set four levels of achievement under the new system: standard exceeded, standard met, standard nearly met or standard not met. The objective was for students to land in the top two categories.

Although the scores were low, they were not a surprise. Students in California performed close to expectations based on a field test given in 21 states two years ago.

Political opposition to standardized testing and Common Core has emerged nationwide among parents and teachers.

Nearly 3.2 million Californians in grades 3 through 8 and grade 11 took the test.