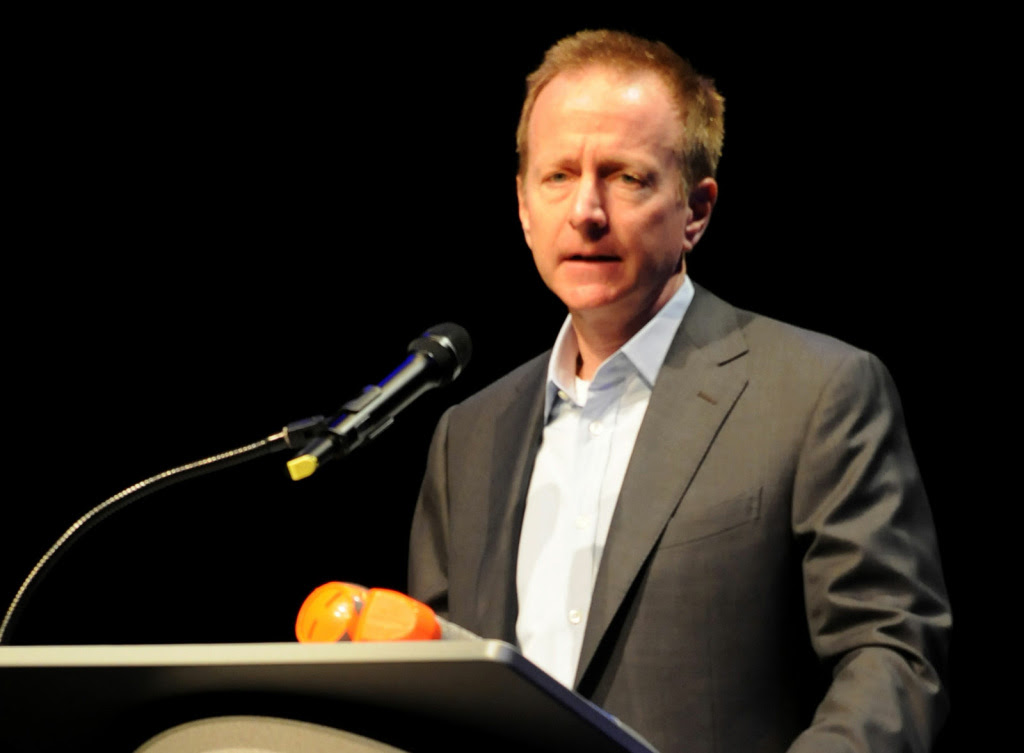 8 September 2105 | 11:20 AM/updated 12 noon ::  The Los Angeles Times is replacing Austin Beutner, its Publisher and CEO.  The news comes as a surprise at the paper, where he had been in the post for a little over one year.

Beutner attended a senior leadership meeting this morning with a "business as usual" attitude, said one of the executives in the room. He thanked the group and left.

Beutner posted a farewell note to facebook Tuesday, confirming he was fired and emphasizing that his leaving is not the result of a mutual agreement.

In his note, Beutner touted the high points of his stint, including the relaunch of the Business and California sections and the Times' winning two Pulitzer Prizes.

"I agreed to become the Publisher and CEO of the Times because I believe in Los Angeles and recognize the unique role the Times plays in our community," Beutner wrote. "It is the civic conscience which holds accountable those with power in Los Angeles, helps celebrate what is good in our community, and provides news and information to help us better understand and engage with the world around us."

Former Mayor Antonio Villaraigosa praised his former deputy for imbuing the newspaper with innovation and a “renewed civic commitment” in his short tenure as publisher.

“The coverage of the city as a whole, whether it was politics or the arts, was just more robust and diverse than it was in the past,” Villaraigosa told KPCC. “I think there was a real commitment to make it an L.A. newspaper again and not a Chicago-focus.”

Villaraigosa said Beautner's firing was the latest example of Tribune’s poor stewardship of the L.A. Times.

“They’ve sucked the blood out of the L.A. Times, taking the profits and destroying the newspaper in the process,” Villaraigosa said.

Villaraigosa said the paper had lost a “lot of great reporters” over the course of Tribune ownership and that Buetner had been doing his best to make the Times a destination for top-tier talent.

In 2014, Beutner was hired as publisher, after a career that included investment banking and a stint as deputy mayor under Villaraigosa. The Tribune had just split from its parent company and Beutner set out on an agenda to diversify the paper's platforms and coverage.

“We have to be very different in digital than we were in print,” Beutner said in December. "We will work through every section we have.”

During his time, Beutner started email newsletters and focused on in person events to spur community talks.

Beutner spoke with KPCC's Larry Mantle earlier this year to discuss why he wanted to facilitate that face-to-face interaction:

Two [hundred] or 300 people who come to each of those events, some of them aren't subscribers and become subscribers in the course of the event. But they'll go home and they'll tell their 10 best friends 'You wouldn't believe the conversation I was part of today.' So the 2 [hundred] or 300 people who are physically present multiply and we have to go back to our roots which is first and foremost to serve the community in which we live.

In his farewell note, Beutner echoed the need for a dramatic shift in the industry:

The newspaper industry will have to change more in the next five years than it has in the last 20.  The fat and redundancies bred over a generation by print monopolies with thick sections of classified ads and full-page print ads are gone.  Cost-cutting alone is not a path to survival in the face of continued declines in print revenue and fierce competition in the digital world.

The news about Beutner was first reported by media analyst Ken Doctor.  The Times and the Chicago Tribune both published stories saying Beutner was fired, saying Tribune Company executives were "unhappy with the financial performance of The Times and with Beutner’s high-profile hires."

Tim Ryan, publisher of the Baltimore Sun, will take over as Publisher at the L.A. Times.

Beutner spoke with KPCC’s Take Two in April about the future of the paper and his plans.