Sep 2, 2015  ::  A prominent scholar from Stanford University will direct a new education institute in Palo Alto whose mission is to influence K-12 policies in both California and the nation.

Linda Darling-Hammond, an emeritus professor at the Stanford University Graduate School of Education, is the president and CEO of the Learning Policy Institute, which formally announced its opening Wednesday. Along with headquarters in the San Francisco Bay Area, the institute has an office in Washington, D.C., an initial budget of $5 million and a staff of 30 that may grow to 50 within a year.

The new position will take most of Darling-Hammond’s time, although she will continue to teach occasionally as an emeritus professor at Stanford and to serve as chair of the California Commission on Teacher Credentialing. Patrick Shields, who managed research at SRI Education for two decades with a focus on California’s teaching force, will be the new institute’s executive director.

The institute has opened during a critical period for education policy nationwide and in California. Along with implementing the Common Core State Standards, California is transitioning to a new school accountability system and a financing system that targets substantially more money to high-needs students and shifts control over spending from the state to local school districts.

In Washington, Republicans and Democrats are struggling with aspects of the rewrite of the No Child Left Behind law. But their overall compromise would return more authority over education policy and accountability to the states. That will make it all the more important, Darling-Hammond said, for communities “to know what works and act based on that knowledge. States and the federal government need to be in the knowledge-sharing business,” and the institute will be a forum and conduit for that information, she said.

Independent and nonpartisan, the Learning Policy Institute will differ from most research institutions, Darling-Hammond said, in that it will combine original and existing research to focus on “pressing policy questions” and then will translate the findings so that federal, state and local policymakers and practitioners can adopt the recommendations and bring them to scale. A large focus of  the institute’s work will be on California, she said.

The timing may be right for a new institute focusing on these issues and for Darling-Hammond. An early education adviser to President Obama, who considered naming her secretary of education, she has been a critic of the standardized test-based school sanctions and federally prescribed options for turning around low-performing schools under the No Child Left Behind law. She also has criticized the federal government’s pressure for states to use standardized test scores to evaluate teachers.

As California, under Gov. Jerry Brown, rejected federal initiatives like the Race to the Top funding competition and went its own way, education leaders have turned to Darling-Hammond. Brown appointed her to the Commission on Teacher Credentialing, where she and the commission have been rewriting requirements for training and credentialing teachers and principals. Superintendent of Public Instruction Tom Torlakson asked her to co-lead the task force that produced his Blueprint for Great Schools in 2011. The State Board of Education has turned to her for advice on creating a new school accountability system based on a collaborative process of improvement and a dashboard of measures of student and school performance. She gave a lengthy presentation of her ideas at the board’s May meeting.

While an advocate for many of these policies and viewed as an ally of the nation’s teachers unions, Darling-Hammond said that the institute is committed to evidence-based, high-quality research that “addresses the complex realities facing public schools and their communities.”

An author of 20 books and 500 publications, she has frequently testified before Congress and was an advisor to the Smarter Balanced Assessment Consortium, which has produced the standardized tests for the Common Core State Standards for California and other member states. While not involved in the creation and adoption of the Common Core – she has criticized its timeline for implementation – she has championed the standards’ goals of deeper learning and problem solving.

Along with researchers, the institute will employ educators, policy experts and communicators who will hold briefings, seminars and debates and do extensive communications outreach and networking, the institute said in a press release.

But David Plank, executive director of Policy Analysis for California Education, or PACE, a research center, said the institute’s “biggest asset will be Linda.”

“All of us say we want our research to influence policy,” he said. “Linda is uniquely engaged at the highest levels of California and Washington, with a direct line to those making policy decisions so she is in a unique position to make research matter.”

Susan Sandler, a trustee of the Sandler Foundation, will chair the board of directors. Other members are Henry Louis Gates, Jr., director of the W. E. B. Du Bois Institute for African and African American Research at Harvard University; Kris Gutiérrez, professor of Language, Literacy and Culture at UC Berkeley and former president of the American Education Research Association; David Lyon, founding president emeritus of the Public Policy Institute of California; David Rattray, executive vice president of the Los Angeles Chamber of Commerce; and Stephan Turnipseed, chairman of the Partnership for 21st Century Skills. 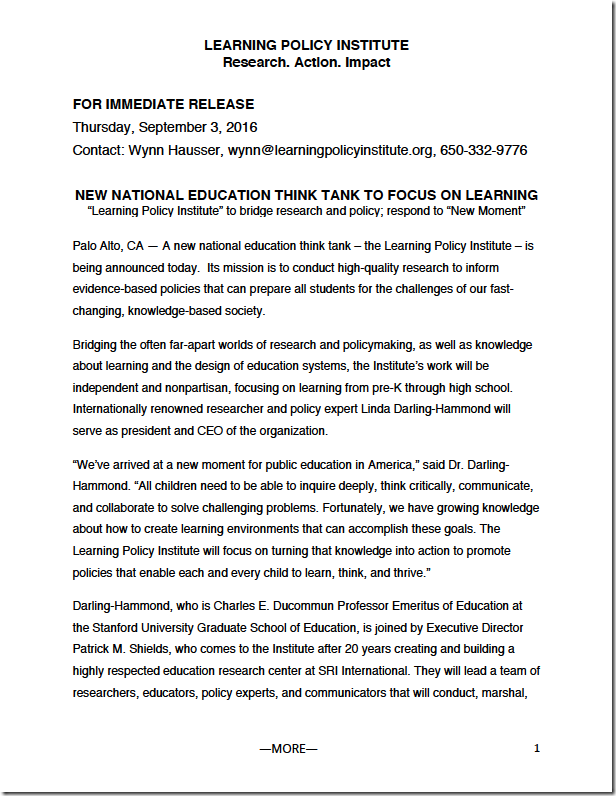 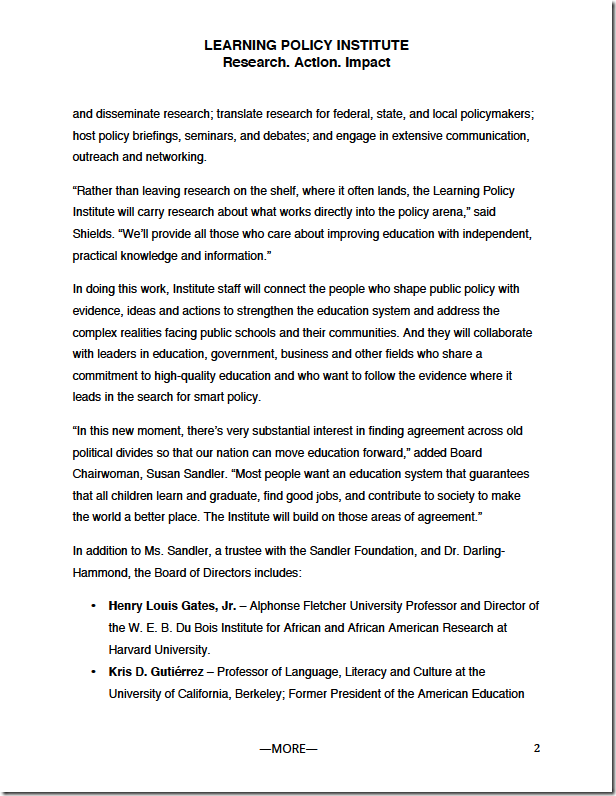 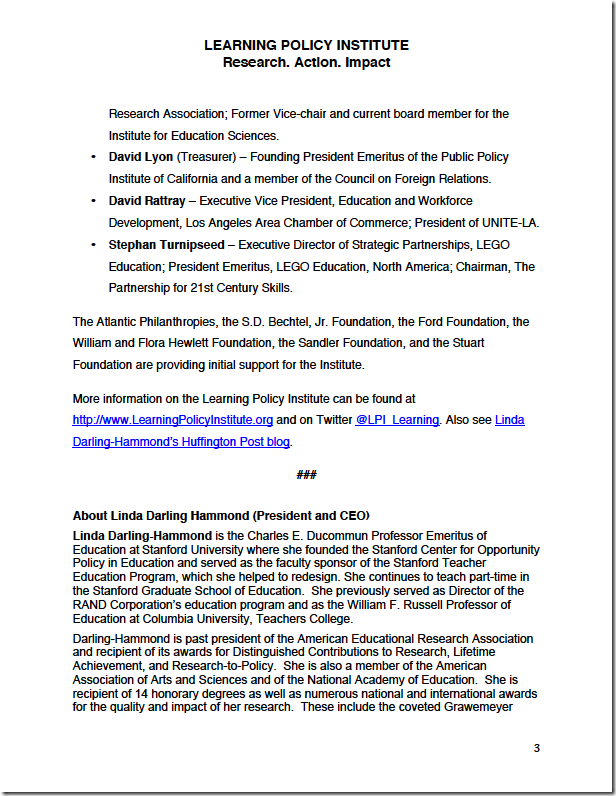 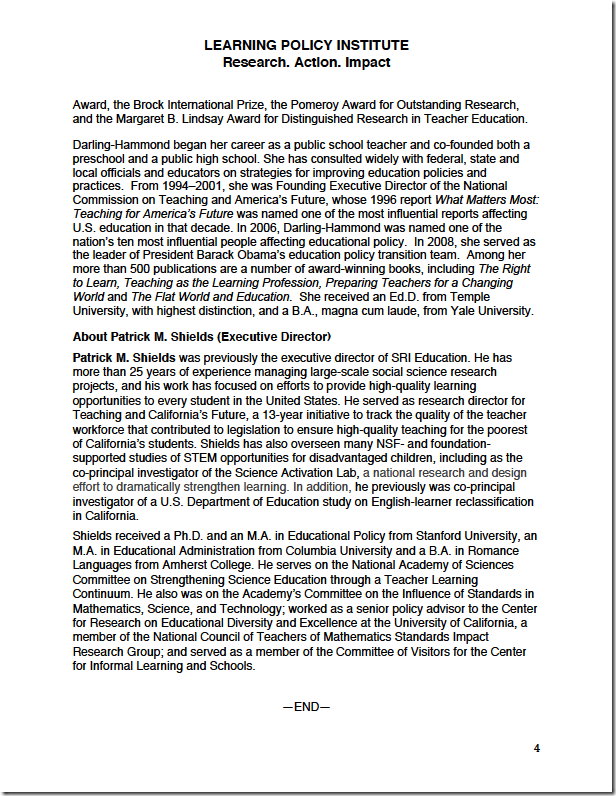