LAUSD FACES A TOUGH CHOICE AFTER DEASY: PLAY IT SAFE OR TAKE A RISK? The records show that at moments of tumult Deasy was simply not in town 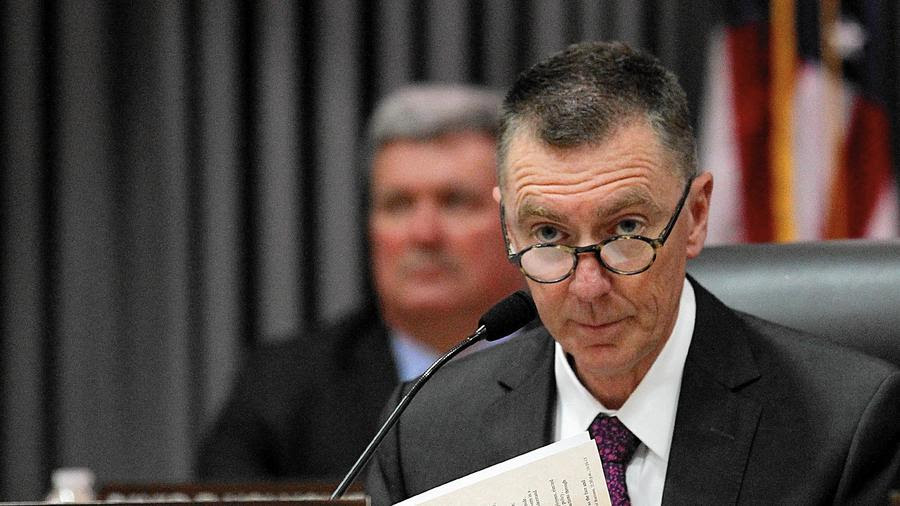 John Deasy, shown in 2013, was considered a bold choice when he was hired as Los Angeles Unified School District superintendent in 2011.  (Luis Sinco / Los Angeles Times)

Sept 5, 2015 |  2PM  ::  When the school board chose John Deasy as superintendent of the Los Angeles Unified School District in 2011, it knew what it was getting: an outsized personality with a national reputation as an advocate for school reform.

And in his 31/2 turbulent years at the helm, Deasy proved to be just that. He courted wealthy donors who helped subsidize a robust travel schedule, and he spent about 200 days on the road as he attempted to raise the district's profile and promote his agenda.

A close look at Deasy's tenure clearly shows the challenge of juggling the responsibilities of running a sprawling, often-dysfunctional district while serving as a leading voice in the national movement to overhaul schools.

At key moments of tumult in the district, the records show, Deasy was simply not in town. 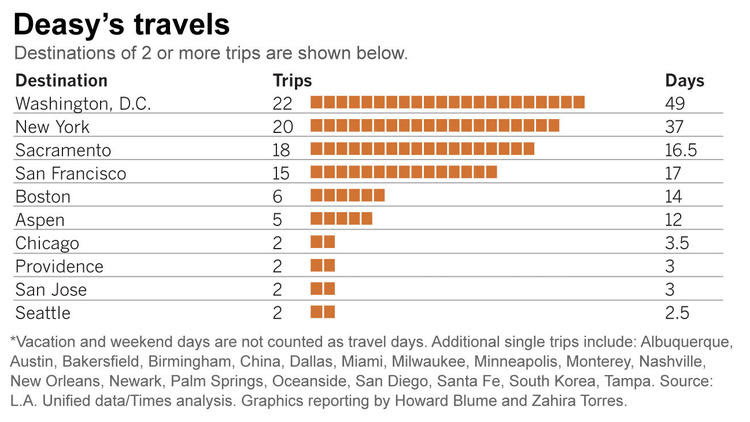 Now, as the Los Angeles Board of Education begins to search for a new superintendent, it faces an important choice: Should it take a chance on a nontraditional candidate? Or should it take the safer route and turn to a conventional educator?

In Deasy's case, his critics argue, his national role came to subsume his home-base responsibilities.

The beginning of the end came a year ago, just before the school year started. Deasy was in New York to discuss challenges threatening education reform.

Back at home, the city's public schools were in disarray. By the time Deasy returned for the first day of classes, a malfunctioning scheduling system had forced students into gyms and auditoriums to await assignments. Some of them ended up in the wrong courses, putting their path to graduation in jeopardy.

Two months later, in October, a Superior Court judge ordered state education officials to meet with Deasy to fix the scheduling problems that he said deprived students of their right to an education. But Deasy flew to South Korea the next morning to visit schools and meet government officials. A week later, he resigned, under pressure, as head of the nation's second-largest school system.

Deasy's tenure has become a lesson for the board in an era when urban school chiefs must navigate a minefield of political interests — including unions, politicians and foundations — all seeking greater influence. 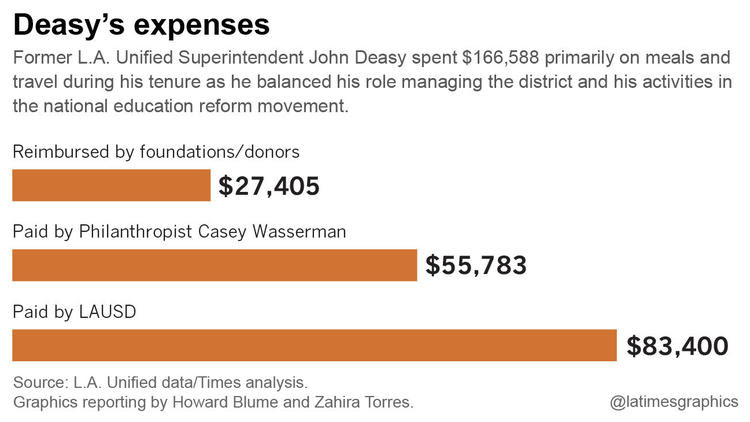 Deasy was a bold choice nearly five years ago, an outsider with a background in educational foundations but also earlier experience as a public school administrator. He soon surprised union leaders and school board members with his aggressive and sometimes polarizing actions.

He sought to weaken the power of the teachers union, advocated using student test scores in performance evaluations and supported the growth of charter schools — all of which were part of a larger reform agenda.

And he represented a culture shift for Los Angeles Unified. He came from the Gates Foundation after stints as head of the Santa Monica-Malibu school system and the district in Maryland's Prince George's County. He was a hard-charging and well-connected leader, as comfortable on wonky education panels as he was riffing with celebrities about school lunches on "Jimmy Kimmel Live!"

He also was a frequent traveler.

Deasy, who was paid $350,000 a year as superintendent, took more than 100 trips, spent generously on meals as he lobbied state and national lawmakers and wooed unions, foundations and educational leaders, according to credit card receipts, calendars and emails obtained under the California Public Records Act.

Deasy spent about $167,000 on airfare, hotels, meals and entertainment during his tenure; half paid by philanthropists and foundations, and the other half by the district. Private foundations often make contributions to school districts, and the LAUSD’s position is that those funds can be used for the superintendent’s expenses.

Among the philanthropists who subsidized his expenses, according to district records, were entertainment executive Casey Wasserman and Eli Broad, both of whom support education causes through their foundations.

Deasy attended conferences and held meetings in cities including Boston, New York City, Washington, D.C., and Seattle. The tab for an evening with teachers union officers at Drago Centro in Los Angeles ran to more than $1,000. During a one-night stay at the Four Seasons hotel in New York, for which he spent $900, he met, among others, Laurene Powell Jobs, the widow of Apple co-founder Steve Jobs and president of the Emerson Collective, which awards grants and invests in education initiatives.

Deasy contends his trips and expenses greatly benefited Los Angeles Unified. In one case, he said, he persuaded the federal government to give the district control over the spending of millions of dollars. And he said his attendance at national conferences helped him develop some of his policies on student discipline, which attracted attention for reducing the number of suspensions.

"What happens in Los Angeles affects the nation and the state of California profoundly," Deasy said in an interview. "It is important that the superintendent of the Los Angeles Unified School District have a national voice that speaks to the issues of equity, justice and state and federal funding."

Deasy, who now works for the Broad Center, which offers a training program for senior school district leaders, said the time he spent away from the district never hampered his work. "I think people would describe me as being hands-on," he said. "I would know what was happening in the district at all times and respond if there was an issue."

Test scores and graduation rates rose incrementally, and dropout rates fell during his tenure. While total enrollment decreased at Los Angeles Unified during his term, enrollment in charter schools grew from about 70,000 students to more than 101,000.

Yet Deasy's signature effort to provide iPads to all students failed, and the cost of untangling the troubled student records system has now topped $200 million.

The school board is trying to find a different balance in the next schools leader. It's looking for a leader with a more grounded ambition and hands-on management. And, board members said they may need to keep the new superintendent on a tighter leash.

Influential philanthropists — along with former Mayor Antonio Villaraigosa — leaned on school board members to bypass a national search and hire Deasy because they believed that then-Supt. Ramon C. Cortines was not moving fast enough. (Cortines was coaxed out of retirement to return when Deasy left; Cortines has said he wants to leave by year's end.)

Villaraigosa left office two years ago, and Mayor Eric Garcetti so far has shown less interest in playing a major role in the district.

Some fear the district could backslide without a forceful leader.

However, board President Steve Zimmer said Deasy's confrontational approach reached a breaking point for him when the superintendent became a star witness for the plaintiffs in Vergara vs. California.

That case, now on appeal, was heralded by national school reformers for making it easier to fire teachers and ending the current practice of layoffs based on seniority. It angered teachers who believed that they were under constant attack from the superintendent, who did not consult the board about the litigation.

"Once he chose to do what he did in the way that he did it, I knew I could no longer support his superintendency," Zimmer said. "There was no reason he had to be on that stand."

In many ways, Deasy's determination to be a different type of superintendent reflected the changing landscape of education.

He courted foundations that support reform efforts, which traditionally have ignored Los Angeles Unified and instead invested in publicly funded but privately run charter schools.

Groups with ties to Silicon Valley and Wall Street have played growing roles in the education reform movement by donating to school board candidates. The Emerson Collective, along with Broad and others, put hundreds of thousands of dollars into campaigns for board members who supported Deasy's goals.

Board member Monica Ratliff said Deasy's travel initially did not raise red flags. But his absence during the school-records troubles deepened concerns about his leadership. She also said he failed to alert board members on numerous occasions when he was on the road.

Some board members said they also worried that by requesting and accepting reimbursement for travel from Wasserman, Broad and others who supported his reform efforts, Deasy was creating the perception that he might give a special hearing to those donors.

In an email, for example, Deasy sought a "scholarship" from Broad to attend a dinner in New York honoring two education leaders who shared his vision for turning around troubled school districts.

"Would Eli support my attendance at an event?" Deasy wrote in October 2011 to Gregory McGinity, a senior official with the Broad Foundation. "I do not have such means to buy the ticket myself…. Do you think he would 'scholarship' me?"

The Broad Foundation reimbursed the district $1,400 for Deasy's airfare and hotel. A board member of the Aspen Institute, a nonpartisan think tank hosting the event, covered the superintendent's $1,500 ticket for the dinner, according to the email.

Deasy denies that the donations influenced him.

Broad has criticized the pace of change at traditional public school systems and started a multimillion-dollar effort to expand charter schools in Los Angeles. His foundation, which also supports the Broad Center, said it has contributed more than $2 million since 2011 to benefit Los Angeles students, including funds to outside organizations that run local public schools.

When Deasy resigned, Broad said that "there has never been a better, more effective superintendent."

"No question he was driving hard, pushing the agenda, pushing reform to achieve better results for the students," said Wasserman, whose foundation has given about $7 million to the district in the past six years, including $56,000 to pay for Deasy's expenses. "But because of certain things — some of his own doing and some not of his doing — [he] probably didn't achieve all that he wanted to during his leadership."

"He was interested in making a splash in the media and nationally, but he really faltered on implementation," said United Teachers Los Angeles President Alex Caputo-Pearl, whose union clashed with Deasy over funding decisions, performance evaluations and job protections.

Others say he might have simply aimed too high, especially with his ill-fated $1.3-billion effort to give all students iPads.

"It's possible that L.A. tried to run before it could walk under John Deasy," said Michael Petrilli, president of the Thomas B. Fordham Institute, a Washington, D.C., education policy organization. "There is an important lesson learned. You've got to start with the basics and then move on from there."